Another of the many skirmishes of the Kansas-Missouri Border War, this attack occurred on the night of May 24, 1856, near a place called Dutch Henry’s Crossing on Pottawatomie Creek in Franklin County. Five men were killed, and it would have been regarded as ordinary murder had it been ordinary times, but it was in a new country, at a time when civil war practically existed in the border counties of Kansas.

Among the pro-slavery men were Allen Wilkinson, who kept the post office; James P. Doyle, who took up a claim north of the Pottawatomie in the fall of 1854; Henry and William Sherman, who settled on an abandoned Indian farm at the ford of the creek, which became known as Dutch Henry’s Crossing. Some Free-State men regarded Wilkinson, Doyle, and the Shermans as harmless pro-slavery men. However, Wilkinson had been elected by fraud and violence to a legislature where he voted for a black code; Doyle had his sons, William and Drury, keep free-state men from the polls by force, and the Shermans entertained lawless invaders. 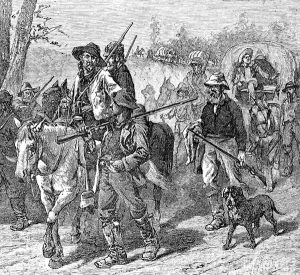 On May 21, 1856, the Pottawatomie Rifles were called together when they heard that an attack was to be made on Lawrence, Kansas, to go to the town’s defense. On the way, they learned that Lawrence had been destroyed and was in camp when, according to the narrative of James Towsley, one of the eye-witnesses, brought news that an attack was expected on Pottawatomie Creek. Owen Brown, and later John Brown, asked Towsley to take a party down there to watch what was going on. The party consisted of John Brown, his four sons — Frederick, Oliver, Owen, and Watson; his son-in-law, Henry Thompson, Theodore Weiner, and James Towsley. They left Shore’s about 2 o’clock on May 23. They went into camp about a mile west of Dutch Henry’s Crossing, and after supper, John Brown revealed his plan, which was to “sweep the Pottawatomie of all pro-slavery men living on it.”

After crossing the Pottawatomie and Mosquito Creeks, the party went north until they reached Doyle’s house. Frederick Brown, Theodore Weiner, and James Towsley stood guard in the road, while the rest went to the house. They brought out Doyle and his sons — William and Drury — and went south across Mosquito Creek. Doyle attempted to escape and John Brown shot him. Brown’s sons killed them with swords when the boys attempted to get away. The party then proceeded to Wilkinson’s house and ordered him out. He had gone but a short distance with them when one of the Brown boys killed him with a sword. They then crossed the creek at Dutch Henry’s and went to Sherman’s, where Mrs. Harris was preparing breakfast for Buford’s men. She mistook the Brown Party for them, but she alarmed Henry Sherman and her husband when she learned of the mistake. In the meantime, William Sherman had been taken to the river, where he was killed with short swords and his body thrown into the stream.

When Brown started that night, he intended to capture these men and hold a trial, but the plan changed after Doyle’s effort to escape. This massacre greatly terrified the pro-slavery settlers of Pottawatomie Creek, who supposed that the whole rifle company had returned to commit the deed.

About the Article: This historic text was published in Kansas: A Cyclopedia of State History, Volume I; edited by Frank W. Blackmar,  A.M. Ph. D.; Standard Publishing Company, Chicago, IL 1912.