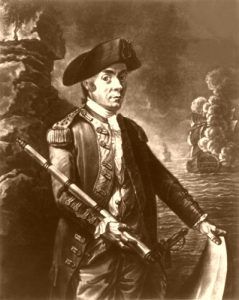 John Paul Jones (1747-1792) – America’s greatest Revolutionary naval commander and founder of America’s naval tradition, John Paul Jones hailed from Scotland. He was born simply John Paul on July 6, 1747, to John Paul and Jean Duff Paul on the estate of Arbigland near Kirkcudbright, Scotland, where his father worked as a gardener.

At the age of 13, John Paul was apprenticed to a shipowner and began his career at sea. He immediately entered into the Atlantic trade that linked England, America, the West Indies, and Africa. Paul’s older brother had married and settled in Fredericksburg, Virginia, the destination of many of the youngster’s early voyages. He was also a crew member on at least three slaving voyages to Africa and grew to hate the traffic in human cargo.

At the age of 21, on a voyage from Jamaica to Scotland on a ship called John, he took command, when both the captain and first mate died from yellow fever. Bringing the ship and the crew safely into port quickly advanced his career. As a reward, the grateful Scottish owners made him captain of the ship and its crew and gave him ten percent of the cargo.

John Paul was well on his way to success as a merchant sailor when he ran into difficulty. In 1773 on the island of Tobago, mutinous sailors looking for advance pay attacked him. In defending himself, John Paul killed one of the men. Convinced that he could not get a fair trial on the island, he escaped to America and took the name, John Paul Jones. He arrived in America at a time when the conflict with Britain over taxes and self-government was reaching a boiling point. Familiar from birth with Great Britain’s harsh treatment of the Scottish people, Jones was immediately sympathetic to America’s quest for liberty. After war broke out in 1775, Jones volunteered for service in the brand-new Continental Navy.

Having long been protected by the powerful British navy, America began the Revolutionary War without naval power of any kind. Congress acted quickly to convert merchant ships to ships of war and to begin building new ships for the navy. With his sea-going background and the support of a North Carolina congressman, Jones was quick to see service. After briefly serving as second in command of the Alfred, Jones in May 1776 took command of the sloop Providence, which mounted 21 guns. Jones soon captured 16 British vessels on a single cruise.

Promoted to the rank of captain, Jones took command of the Alfred, capturing yet more British ships. In April 1778, as captain of the Ranger, he was cruising the waters close to Britain. Jones conceived the bold plan of attacking the town of Whitehaven on the west coast of England. He hoped to capture an important individual and then negotiate the exchange of American naval prisoners being held as common criminals in English jails. The raid on Whitehaven did little damage, but it rattled the British to think that the American navy could reach them at home.

Jones’s greatest victory came in September 1779, by which time, he commanded a fleet of five ships, including his flagship, which was a 40-gun frigate. The flagship, a converted French merchant ship, was re-named the Bonhomme Richard, in honor of Benjamin Franklin (Bonhomme Richard being the French translation of Franklin’s Poor Richard). Jones knew that in the fall, rich British fleets from the West Indies and the Baltic Sea returned to England, and he planned to take one or both. On September 23rd, the 41 ships of the Baltic convoy came into view off the east coast of England. As the merchant ships ran for safety, the two escorting British warships, Serapis and Countess of Scarborough, squared off against the Bonhomme Richard and another American ship, the Pallas.

At that time, when nations were at war, all of the enemy’s ships, military and civilian, were considered fair game. When warships and privately owned ships authorized to make war, took enemy vessels, the captain and crew shared with their government any proceeds from the sale of the captured ships and cargoes. But, the root of the conflict with Britain was that she did not consider America an independent nation and refused to grant America the customary rights of a nation at war. Britain viewed sailors in the Continental Navy as pirates and tossed them in jail as common criminals. It was this policy that John Paul Jones sought to overturn by attacking English towns.

After three hours of maneuvering, the Bonhomme Richard rammed the Serapis, and Jones tied the two ships together. They poured deadly cannon fire into each other for two hours. When the British captain, Richard Pearson, asked if the Americans were ready to surrender, Jones roared back, “I have not yet begun to fight!” 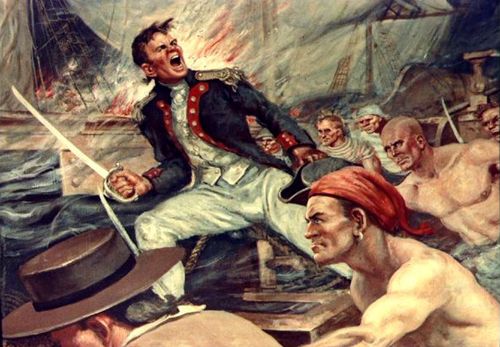 “I have not yet begun to fight!” – John Paul Jones, painting by  Charles J. Andres.

An American grenade then exploded below decks on the Serapis and it was the British who surrendered. The Bonhomme Richard however, was damaged beyond repair, so Jones transferred his flag to the Serapis, bringing it and the Countess of Scarborough to Holland as prizes. Jones’s courage and resourcefulness in this fight brought him international recognition.

American plans to provide Jones with a large new ship never materialized. At the war’s conclusion, Jones urged Congress to maintain a strong navy as the best insurance against future conflicts. But, the new nation had neither the funds nor the desire to do so, and the Continental Navy soon disbanded. After brief but distinguished service in the Russian navy against the Turks in 1788-1789, Jones briefly went to Poland before going on to Paris in 1790, where he met old friends and made plans to buy a country estate in America as well as making several attempts at re-entering Russian service. In June 1792, he was appointed U.S. Consul to treat with the Dey of Algiers for the release of American captives. However, before Jones was able to fulfill his appointment, he died of a severe brain tumor on July 18, 1792, at the age of 45. He was buried at the Saint Louis Cemetery in Paris. 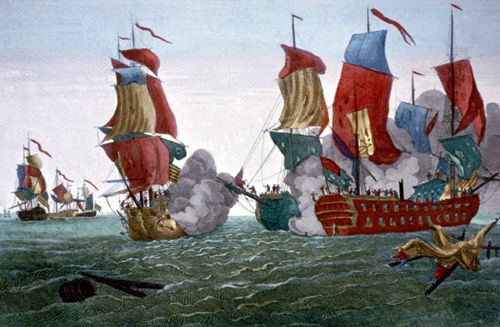 Battle between the Bonhomme Richard and the Serapis

History has often glossed over Jones and his contribution to the American Revolution due in part to controversial aspects of his life. In addition to being a foreign-born soldier for hire and therefore a perpetual outsider, some modern historians are quick to point out that despite his disgust at the slave trade he made a fortune as a slave ship owner. Among other controversial aspects, he was known to be braggadocios, and according to some, many of his friends had shunned him in the end.

Despite the controversies, and the ‘small part’ the Continental Navy played in the American Revolution, in the early 1900s, President Theodore Roosevelt convinced Congress to fund relocating Jones burial to America.  And so, more than a century after his death, his remains were returned to the United States and were placed in a magnificent sarcophagus in the chapel of the Naval Academy in Annapolis, Maryland. His tomb has become a shrine to this founding father of the United States Navy.