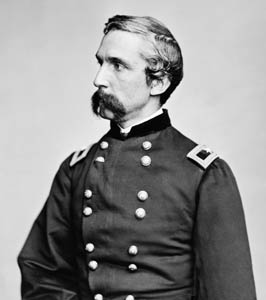 Joshua Lawrence Chamberlain was a college professor, Civil War General for the Union, Medal of Honor recipient, and the 32nd Governor of Maine.

Chamberlain was the first of five children born in Brewer, Maine, on September 8, 1828, to Joshua and Sarah Brastow Dupee Chamberlain. He grew up to attend Major Whiting’s military academy in Ellsworth. Chamberlain then taught himself Greek so he could be admitted to Bowdoin College in 1848. While there, he was a member of several societies and fraternities, taught Sunday school during his freshman and sophomore years, and led the choir at the Congregational Church during his Junior and Senior years. Graduating in 1852, he then entered the Bangor Theological Seminary for three years. Besides studying in Latin and German, he mastered several other languages.

On December 7, 1855, he married Fanny Adams, a cousin and the adopted daughter of a local clergyman. The couple would eventually have four children.

He then returned to Bowdoin College working as an instructor in logic and natural theology, then as a professor of rhetoric and oratory. He eventually went on to teach every subject in the curriculum except science and mathematics. In 1861 he was appointed professor of modern languages, which he held until 1865.

A passionate supporter of the Union cause, he volunteered to join the Union Army when the Civil War erupted, despite the objections of family and colleagues. He was commissioned as a Lieutenant Colonel of the 20th Maine Volunteer Infantry in 1862.

Serving under Colonel Adelbert Ames, he was present with his regiment the Battles of Antietam and Fredericksburg. He was then promoted to Colonel and assumed command of the unit after the Battle of Chancellorsville, leading it with distinction during the Gettysburg Campaign. During the Battle of Gettysburg, he gained fame when he commanded the 20th Maine in its defense of Little Round Top on July 2, 1863. Fending off repeated Confederate attacks from the 15th Alabama Infantry Regiment, the Union troops finally drove the Confederates away with a downhill bayonet charge. His actions would later earn him a Medal of Honor.

He assumed command of a brigade in August 1863 and participated in the Battles of the Wilderness, Spotsylvania, and Cold Harbor. His troops were among the first to reach Petersburg, where Chamberlain was severely wounded during the Second Battle of Petersburg in June 1864.

Out of action for months, he received a battlefield commission of Brigadier General. He recovered in time to lead a brigade in the last phase of the war, distinguishing himself again at the Battle of Five Forks. He received the brevet of Major General on April 1, 1865, for his actions at Five Forks. He was given the honor of commanding the Union troops on April 12, 1865, at the surrender ceremony for the infantry of Robert E. Lee’s Army at Appomattox Court House, Virginia. Afterward, the general ordered his men to salute their vanquished foes. 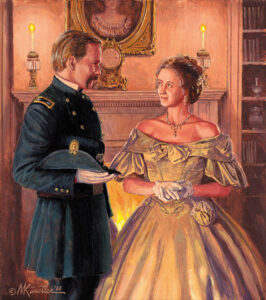 After the war, he was offered but declined a commission in the Regular Army.

Instead, he entered politics as a Republican and served as Governor of Maine from 1867 to 1871.

After leaving office, he returned to his alma mater, Bowdoin College, serving as its president until 1883. He spent his twilight years writing and speaking about the war.

He died in 1914 at age 85 due to complications from the wound that he received at Petersburg.

Memoirs of his wartime experiences were posthumously published in the 1915 work The Passing of the Armies.