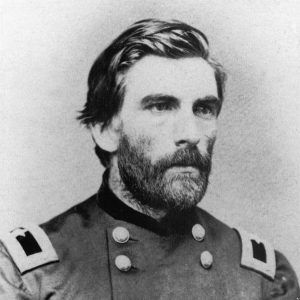 Grenville M. Dodge served in the Civil War, obtaining the rank of Major General and afterward in the Indian campaigns in the West. He later served as a U.S. Congressman and worked as a businessman and railroad executive who helped construct the Transcontinental Railroad.

Born on April 12, 1831, near Danvers, Massachusetts, Grenville Mellen Dodge made an early name for himself as a civil engineer, surveying for the railroads as they made their way west. When the Civil War began, Dodge was a prominent member of society in Council Bluffs, Iowa, where he was married, had a family, served on the city council, and continued his work in surveying. However, Dodge was soon drawn into the war when the governor of Iowa requested that he travel to Washington, D.C., to procure arms for Iowa Union volunteers. Successfully completing this mission, Dodge was appointed colonel of the 4th Iowa Infantry in July 1861.

Performing admirably in several Western Theater battles, Dodge was made brigadier-general following his wounding during the Battle of Pea Ridge, Arkansas. At that time, he was placed in command of the District of the Mississippi, where he was involved in protecting and building railroads. He was promoted to major general in June 1864 and commanded the XVI Corps during William T. Sherman’s Atlanta Campaign. He would complete the war as commander of the Department of the Missouri.

Following the war, Dodge resigned from military service and, with the endorsement of Generals Grant and Sherman, became the lead engineer for the Union Pacific Railroad. Holding this position, Dodge went on to play a principal role in the engineering and construction of the Transcontinental Railroad. He would continue to play an active role in the railroad and Iowa politics until he died in Council Bluffs, Iowa, on January 3, 1916. He was buried there at the Walnut Hill Cemetery.