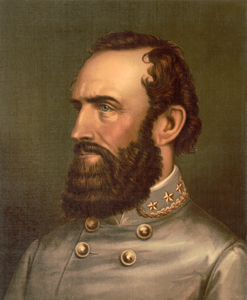 Thomas Jonathan “Stonewall” Jackson was a Confederate general during the Civil War, who was the most revered Confederate commander after Robert E. Lee.

Jackson was born at Clarksburg, West Virginia, on January 21, 1824, the third child of Jonathan Jackson and Julia Beckwith Neal Jackson. When he was just two, his father died and five years later, he was orphaned when his mother died as well. Sent to live with a paternal uncle near present-day Weston, West Virginia, Thomas helped around the farm and his uncle’s mill. Much of his education was self-taught, but as the boy learned, he studied hard and later, actually taught school at Jackson’s Mill. In 1842, he was barely accepted into the Military Academy at West Point, as he had difficulty with the entrance examinations. After graduating in 1846, he served in the Mexican-American War, then taught at the Virginia Military Institute.

Upon the outbreak of the Civil War, he was commissioned as a colonel in the Confederate forces of Virginia and dispatched to Harpers Ferry where he was active in organizing the raw recruits. During his service, Jackson was quickly recognized for his innovation, leadership skills, and bravery, and receiving several quick promotions, he was made a Brigadier General on June 17, 1861.

He led a number of campaigns and battles during the Civil War, including the Valley Campaign, first and second battles of Bull Run, Antietam, and Fredericksburg. It was during the Battle of Bull Run when Jackson assumed his nickname, when Brigadier-General Barnard E. Bee stated, “There is Jackson standing like a stone wall.”

He was wounded by “friendly fire” at the Battle of Chancellorsville, Virginia on May 2, 1863, and his left arm had to be amputated. Jackson died of complications from pneumonia on May 10, 1863, eight days after he was shot.

A Southern hero, military historians consider him to be one of the most gifted tactical commanders in U.S. history. As a side note, did you know that not all of Jackson is buried in the same grave? 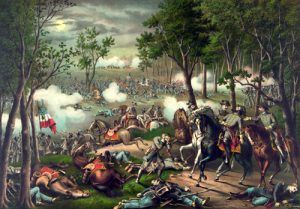 Battle of Chancellorsville, Virginia by Kurz and Allison