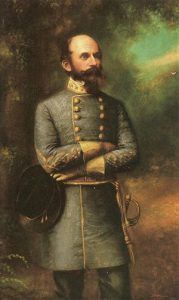 Richard Stoddert Ewell was a career United States Army officer and a general during the Civil War who achieved fame as a senior commander under Stonewall Jackson and Robert E. Lee. He fought effectively through much of the war, but, his legacy has been clouded by controversies over his actions at the Battle of Gettysburg and at the Battle of Spotsylvania Court House.

The grandson of the first U.S. Secretary of the Navy, Richard Stoddert Ewell, was born on February 8, 1817, in Georgetown, District of Columbia. His military career got off to a strong start with his graduation from the United Military Academy, ranking thirteenth in his class. Before the Civil War, he served as a first lieutenant with the 1st U.S. Dragoons and as a captain in the Mexican-American War. He carried that early success into the Virginia Provisional Army, being appointed a colonel upon his enlistment in May 1861 and then promoted to brigadier general in the Confederate army just a month later.

In January 1862, he was promoted to major general and, while serving under General Thomas “Stonewall” Jackson, served with distinction during the Seven Days’ Battles of Gaines’ Mill and Malvern Hill before losing part of his leg during the opening action of the Second Battle of Manassas in August 1862.

Returning to duty in May 1863 after the Battle of Chancellorsville, Ewell, in the wake of the death of Stonewall Jackson, was promoted to lieutenant general and given command of a corps in the Army of Northern Virginia. Although victorious at the Second Battle of Winchester during the opening of the Gettysburg Campaign, Ewell’s fortunes changed shortly after that. During the Battle of Gettysburg, his failure to pursue the fleeing Union army in the opening hours allowed the Federals to occupy and fortify a strong position. Many of Robert E. Lee’s generals criticized the failure to pursue the enemy, claiming it had cost the Confederacy its chance to win the bloody engagement. The criticism would follow him for the rest of the war. Believing the lingering wound from Second Manassas continued to inhibit his abilities, Robert E. Lee reassigned Ewell to command of the Department of Richmond in the spring of 1864.

Ewell was captured at the Battle of Sayler’s Creek on April 6, 1865, and three months imprisoned at Fort Warren in the Boston Harbor. Upon his release, he spent the remainder of his life farming his wife’s estate near Spring Hill, Tennessee. He died of pneumonia, less than three days after the death of his wife and first cousin, Lizinka Campbell Brown.