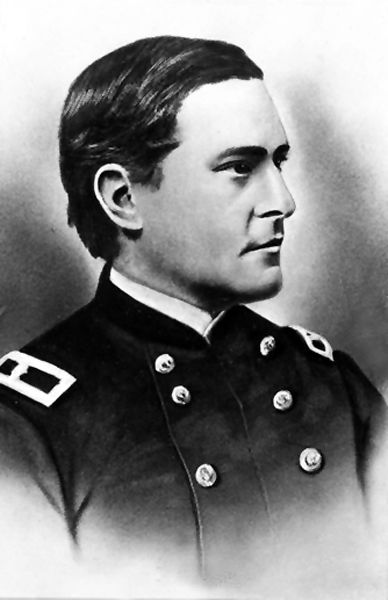 Marcus A. Reno – (1834-1889) – A career military officer in the Civil War and the Black Hills War against the Lakota Sioux and Northern Cheyenne, Reno is most noted for his role in the Battle of the Little Bighorn.

Born at Carrollton, Illinois on November 15, 1834, Reno attended West Point, where he was commissioned as a second lieutenant in July 1857. He served on the frontier in Oregon before joining the 1st Cavalry when the Civil War began. By the time the war was over, he had been promoted to captain and in 1866 was sent to Fort Vancouver. Two years later he was promoted again to the rank of major and in December 1868, joined the 7th Cavalry based at Fort Hayes, Kansas. Later he was moved to Fort Abraham Lincoln in North Dakota, where he accompanied Lieutenant Colonel George A. Custer on his Sioux campaign in 1876.

On June 17, 1876, General George Crook and about 1,000 troops, supported by 300 Crow and Shoshone, fought against 1,500 members of the Sioux and Cheyenne tribes in what is known as the Battle at Rosebud. Custer soon headed out to find those Sioux and Cheyenne involved at in the battle and on June 25th a scout reported a large encampment near the Little Bighorn River. Though the Indians numbered some 10,000, Custer assumed the numbers were much less and instead of waiting for the main army under General Alfred Terry to arrive, he decided to attack the encampment immediately. He divided his men into three groups, one under Reno, another under Captain Frederick Benteen, and led the third.

When Reno soon discovered he was greatly outnumbered he retreated to the river and was later joined by Benteen and his men. Custer continued his attack but, also seriously outnumbered, he was quickly defeated by about 4,000 warriors. He and all his 264 men were killed. Reno and Benteen were also attacked and 47 of them were killed before they were rescued by the arrival of General Alfred Terry and his army.

After the Battle of the Little Bighorn, Reno was heavily criticized for his actions —  accused of being drunk, a coward, and incompetent. However, this did not stop Reno replacing George A. Custer as commander of what was left of the 7th Cavalry and in official inquiry found him not culpable of any wrong-doing during the battle. However, in March 1877, Reno was accused of making improper advances on the wife of another officer and was suspended without pay for two years. In 1880 Reno was accused of striking a junior officer and being drunk on duty. Found guilty, he was dismissed from the army on April 1, 1880. In his last years, Reno made strenuous efforts to clear his name but this campaign was unsuccessful. Marcus Reno died of cancer in Washington D.C. on March 30, 1889.

In 1967, a US military review board reversed Reno’s court-martial decision after reviewing original documents and testimony officially changing his general discharge status to “honorable.” Originally buried in an unmarked grave in Washington’s Oak Hill Cemetery, his remains were re-interred later that year in Custer National Cemetery, within the Little Bighorn Battlefield.

The Battle of Little Bighorn, Montana