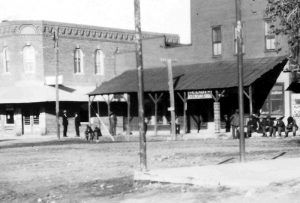 Abran  Baca – Outlaw Baca, along with two of his brothers, murdered a man named Anthony Conklin in Socorro, New Mexico in 1880. He was soon captured. His brother, Antonio was killed while attempting to escape. After his brother, Onofre was acquitted and Abran was awaiting his own trial, he was lynched by a vigilante committee, obviously unhappy with Onofre’s release.

Antonio Baca – Antonio, along with two of his brothers, murdered a man named Anthony Conklin in Socorro, New Mexico in 1880. He was soon captured and while trying to escape the jail on December 29, 1880, he was killed by authorities.

Onofre Baca – Outlaw Baca, along with two of his brothers, murdered a man named Anthony Conklin in Socorro, New Mexico in 1880. His brother, Antonio was killed while attempting to escape. Onofre later stood trial but was acquitted in 1881.

Jose Baca – A multiple offender, Baca was sent to prison on November 19, 1906, for the fifth time.

Manuel Baca – Outlaw member of Vicente Silva’s White Caps Gang in the 1890s. His “job” in the gang was to act as the “Judge” who ordered the execution of disloyal gang members.

Patricio Baca (18??-1875) – One of the most notorious horse thieves in northern New Mexico Territory, he was killed in Chimayo in December 1875.

Cullen Montgomery Baker (1839-1868) – Baker was a cold-blooded, and ruthless killer who left a long trail of bodies across the American Frontier. After the Civil War, he didn’t want to give up the fight and ambushed reconstructionists, killed former slaves, and generally terrorized the states of Texas and Arkansas.

Frank Baker (18??-1878) – An outlaw member of the Jesse Evans Gang and a lawman, Baker served as a deputy sheriff in Lincoln County, New Mexico. Embroiled in the Lincoln County War, he rode in the posse that killed John Tunstall. He was killed by Billy the Kid on March 10, 1878.

Thurman “Skeeter” Baldwin (1867-19??) – Oklahoma outlaw and member of the Cook Gang. He was captured after a bank robbery.

Claude Barbee – A wanted Texas outlaw, Barbee was tracked down to a west Texas ranch by a Deputy Hamilton, which erupted into a gunfight and the lawman was killed. Barbee fled, was captured, but escaped.  He was pursued by Pat Garrett, but gave the lawman the slip and made it out to California, where he lived under another name aid died in the 1940s.

John Barber – After robbing a bank in Cisco, Texas in 1887, Barber fled to Oklahoma. He was later killed by U.S. Deputy Marshals, Captain Gideon White and Barney Connelly.

John Barbour – Outlaw member of Whitley-Cornett Gang of Texas in the 1880s. He was later killed in Indian Territory.

Clinton Barkley, aka: Bill Bowen (18??-??) – A Texas gunman wanted for murder, he soon found himself in the midst of the Horrell-Higgins Feud. 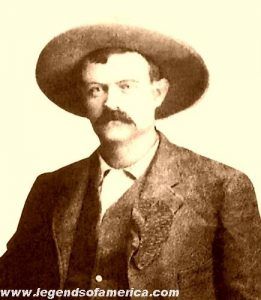 Richard “Rattlesnake Dick” Barter, aka: Dick Woods (1834-1859) – A California outlaw, Barter made his living stealing horses and robbing mining camps. He was killed in a gunfight with a posse near Auburn, California at the age of 26.

“Kid” Barton – A New Mexico outlaw, Barton led a stage-robbing gang that operated at Raton Pass. He killed several people and was hanged in the late 1860s.

Jerry Barton – A gunfighter, Barton ran a saloon in Charleston, Arizona. At some point, he killed his partner, and later a Mexican man in 1881. He was imprisoned for the second killing.

Samuel “Sam” Bass (1851-1878) – The leader of the Sam Bass Gang, Bass robbed stages in South Dakota and trains in Texas. He and another gang member, Seaborn Barnes, were killed at Round Rock, Texas in 1878.

Captain Andrew T. Baugh – A Texas outlaw and cattle rustler, Baugh was lynched in 1885 when caught with a herd of stolen cattle.

William “Cyclone Bill” Ellison Beck – An outlaw, who became a suspect in the robbery of an Army paymaster on May 11, 1889.

Courtney Belmont – A gunman and outlaw, Belmont rode with Matt Zimmerman in the 1880s in Nebraska.

Dick Belmont – A gunman and outlaw, Dick rode with Matt Zimmerman but went to Kansas after Matt was killed. He was later shot and killed.

Jules Beni (18??-1861) – Jules Beni (sometimes referred to as Jules Reni) was a western outlaw who was the corrupt manager of the Central Overland, California & Pike’s Peak Express Company in Old Julesburg, Colorado.

George Bennett – Outlaw member of the Bill Dalton gang, Bennett was killed in 1893 at Longview, Texas during a bank robbery.

Benjamin F. Bickerstaff (18??-1869) – A veteran Confederate guerilla soldier, Bickerstaff looted Federal supplies throughout Texas. He was shot and killed by the citizens of Alvarado in April 1869.

Charles Bill – Charles Bill, was run out of the New Mexico Territory on February 6, 1906.

John Billee (18??-1890) – An outlaw operating in Indian Territory, Billee murdered W.P. Williams with the help of Thomas Willis. Wanted for robbery and murder, he was captured by U.S. Deputy Marshals Will Ayers, James Wilkerson, and Perry DuVall and taken to Fort Smith, Arkansas. He was hanged on January 16, 1890.

Bil Bivins – A Wyoming, Bivins was jailed for train robbery near Atlantic City in 1877.

Lige Bivins – A Texas, Bivins as a member of a gang of raiders in Bell, Texas, during the Civil War.

H. J. Bassett – A member of Selman’s Scouts following the turmoil of the Lincoln County War in New Mexico. He disappeared sometime after late November 1878.

Jim Black – A train robber in the New Mexico Territory.

Pope Black – A New Mexico outlaw, Black was shot and killed in the Florida Mountains, while resisting arrest, December 1882.

Robert “Arkansaw” Black –  When vigilantes caught up with this, Black eluded lynching by challenging them to a fight.