Deadwood has been known the world round for over half a century. It is the smallest “metropolitan” city in the world, with paving and public and other buildings such as are seldom found in cities less than several times its size.”  – John S. McClintock, Pioneer Days in the Black Hills, 1939.

Deadwood, South Dakota, was once one of the liveliest mining camps in the country after gold deposits were found, which led to the Black Hills Gold Rush. Unlike other popular mining camps, Deadwood never died when the gold played out. Today, it continues to be the Lawrence County seat and a popular destination. The entire city is on the National Register of Historic Places. 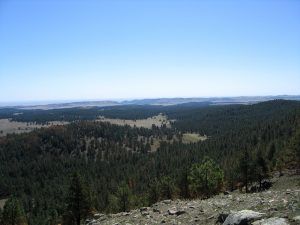 The Black Hills of South Dakota.

The famous and the infamous have called Deadwood and the Black Hills of South Dakota home over the last several centuries. Lewis and Clark, Wild Bill Hickok, Wyatt Earp, George Armstrong Custer, Poker Alice, the Sundance Kid, Calamity Jane, and many others have all passed through here in search of fortune and adventure.

But long before the arrival of the white man, the land was home to the Cheyenne, Kiowa, Pawnee, Crow, and Sioux (or Lakota) Indians. The Sioux dominated a tract of land large enough to support the buffalo herds on which they subsisted.

The Lakota never welcomed the white man to their hunting grounds, and as immigration increased, there was a marked decline in American Indian-white relations. The Army established outposts nearby, but they seldom entered the Black Hills. Trouble escalated when bands of Lakota began to raid nearby settlements, then retreating to the Black Hills.

In the early 1860s, groups of explorers, miners, and homesteaders began to push into the area, which further angered the Lakota. Subsequently, a series of treaties were made with the Sioux, including the Great Sioux Reservation, which included all lands from the Missouri River west to the Bighorn Mountains of western Wyoming. However, by 1870, stories of gold in the Black Hills began to circulate, and the treaties were broken as people flooded into the area.

In 1875, John B. Pearson found gold in a narrow canyon in the Northern Black Hills. This canyon became known as “Deadwood Gulch” because of the many dead trees lined the canyon walls. According to Colonel Richard I. Dodge, an estimated 800 white men were mining the Hills at this time. 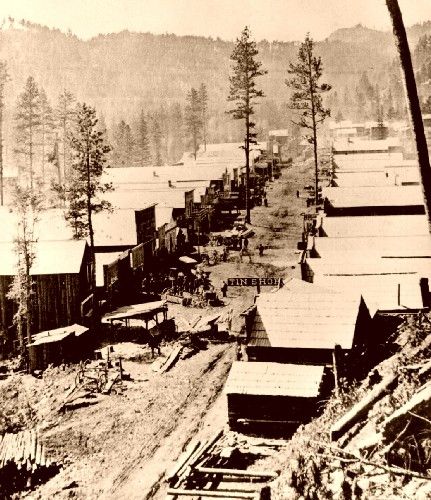 The town of Deadwood was established in 1876 and was soon swarming with thousands of prospectors searching for an easy way to get rich. At first, the settlement was made up of tents and shanties, but as the population grew, these were replaced with brick and wooden structures and false front businesses. Fortune struck Fred and Moses Manuel, who claimed the Homestake Mine, which proved to be the most profitable in the area. Through 1901, the Homestake produced $100 million in gold and continued to operate for the next century until it finally closed in 2001.

Although the Manuel’s had been lucky, there were hundreds of others that were not so fortunate. Though most of the early settlers of Deadwood were gold miners, the lawless region naturally attracted a crowd of rough and shady characters.

Like many towns of the American West, these particular individuals made the early days of Deadwood rough and wild. A mostly male population eagerly patronized the many saloons, gambling establishments, dance halls, and brothels, which were considered legitimate businesses and were well known throughout the area. Ninety percent of the female population of Deadwood were prostitutes. The new mining town averaged one murder per day in that first year. 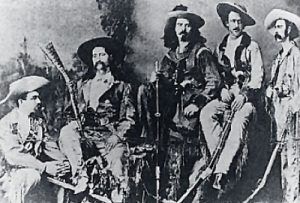 By July of 1876, a million dollars of gold at $20 an ounce had been taken from the Black Hills. That same summer saw the arrival of Wild Bill Hickok and Calamity Jane in Deadwood. When he arrived, Hickok was already a legendary figure, having received numerous sensational newspaper accounts that described his legendary gun-fighting skills. Wild Bill had been dismissed from his job as a marshal in Abilene, Kansas, for over-enthusiasm. The former actor, scout, lawman, and gambler quickly began to frequent the Deadwood saloons continuing his long-time habit of playing poker.

On August 2, 1876, Hickok was playing poker at Nuttall & Mann’s #10 Saloon. Ignoring his cautious habit of sitting with his back to the wall, the table was already filled, and he took a seat that exposed his back to an open door at the rear of the saloon. Given the advantage of surprise, Jack “Broken Nose” McCall slipped from behind, shouted “Take that!” and fired a shot into the back of Hickok’s head.

From Hickok’s fingers fell two aces, two eights, and another card, a combination that has since been known as the dead man’s hand. McCall, a drunken nobody trying to make a name for himself, later claimed that he was seeking revenge for the slaying of his brother in Abilene, Kansas, by Hickok. 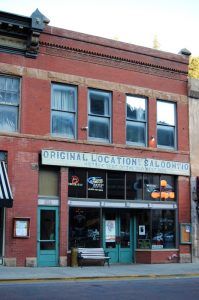 The original location of the #10 Saloon where Wild Bill Hickok was killed.

Calamity Jane was renowned for her excellent marksmanship, preference for men’s clothing, and bawdy behavior. Jane was said to have been an Army scout, a bullwhacker, a nurse, a cook, a prostitute, a prospector, a gambler, a heavy drinker, and one of the most foul-mouthed people in the West. In June of 1876, she partnered with Wild Bill Hickok as an outrider for Colorado Charlie Utter’s wagon train, galloping into Deadwood with a shipment of prostitutes, fresh from Cheyenne, Wyoming. For the remainder of her days, Calamity Jane claimed to have been Hickok’s lover. But the record shows that Wild Bill had just recently married, and his letters home from Deadwood indicate that he was happily married.

As chance would have it, he never saw his wife again, and in Deadwood’s Mount Moriah Cemetery, it’s not Wild Bill’s wife who occupies the grave next to his. Wild Bill shares his final resting place, as well as his place in history — by her decree, not his — with the self-proclaimed Queen of the Wild West, Calamity Jane. 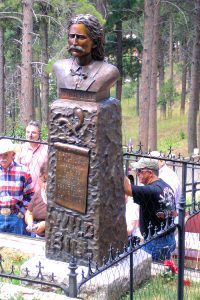 By 1877, Deadwood was evolving from a primitive mining camp to a community with a sense of order. The crude tents and shanties that had housed the early miners quickly gave way to wood and brick buildings. The community organized a town government that relied on Sheriff Seth Bullock to keep law and order. The gradual transition of Deadwood from a mining camp to a civilized community nearly came to an abrupt end.

On September 26, 1879, a fire started at a bakery on Sherman Street and rapidly spread to the business district of Deadwood. The fire damaged the business district of the town, but rather than give up; the community rebuilt itself. The fire made clear the need for regulations preventing another fire. The local government enacted laws that would permit only certain building materials for building construction. After the fire, Deadwood rebuilt itself in brick and stone rather than in lumber.

To settlers coming to South Dakota in the 1880s, the atmosphere was electric with prosperity and promise. New lands opened up to homesteaders, gold was harvested from the Black Hills, riverboats ran the rivers, and railroad tracks were laid to new town sites. 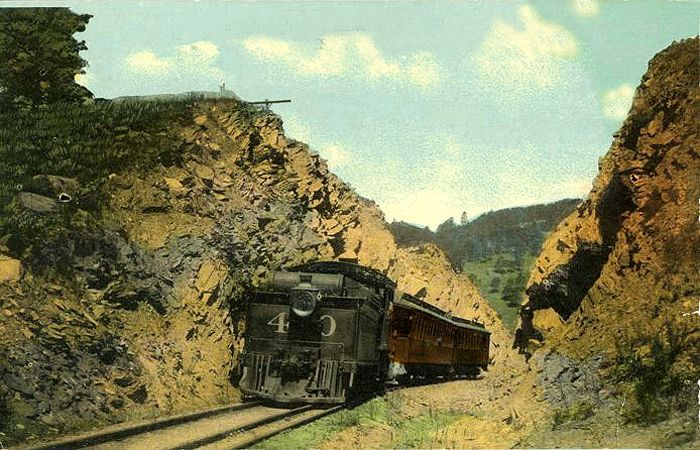 By 1889, the population of South Dakota was large enough to warrant statehood, and on November 2, 1889, the Dakota Territory became the states of North and South Dakota.

In 1891, the railroad connected the town to the outside world. The Fremont, Elkhorn, and Missouri Valley Railroad helped bring the community together as a civic entity. The railroad also brought people to the area from various ethnic groups, among whom were numerous Chinese immigrants who helped to build the railroad.

Hundreds of Chinese came to the Black Hills looking for work in mines or commerce. Many settled in Deadwood, where they sought work in restaurants, laundries, and stores. By the end of the 1880s, Deadwood had a Chinatown, which was at the northern end of present-day Main Street. The Chinese managed to establish a district and a fire department for themselves but struggled in nearly every part of society. Often denied equality in a dominantly Caucasian community, the members of Chinatown strived for recognition as citizens of Deadwood. All too often, they were subjected to the suspicion and hostility of whites. 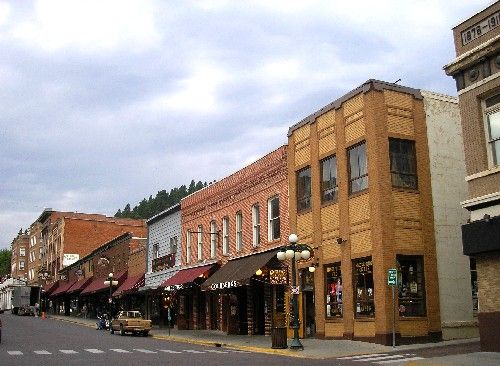 Deadwood gradually evolved from a wild frontier town to a prosperous commercial center due, in part, to the construction of the railroad. Although the community primarily focused on its gold mining industry, Deadwood became the place where people traveled in the Black Hills to conduct their business.

Deadwood moved forward into the 20th century, but the image of the Wild West town has always lingered due to past events and the individuals responsible for making the town into a legend.

As Deadwood moved forward, the gambling and prostitution establishments were still considered legitimate businesses. However, the new century brought new beliefs and ideas. Gambling and prostitution came under attack from reformers who believed that the two were partly responsible for causing social problems, such as drunkenness and poverty. These reformers also supported the temperance movement that was sweeping the country. 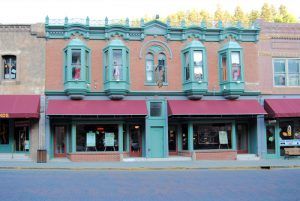 The Green Door Club was once one of the most famous brothels in Deadwood, South Dakota. Today it is a casino and restaurant. Photo by Kathy Weiser-Alexander.

In 1919, the U.S. government had passed the Prohibition Act banning the sale and distribution of alcohol. During the roaring twenties, gaming became illegal but continued to operate behind closed doors. With the repeal of the Prohibition Act in 1935, gambling once again flourished in Deadwood until 1947, when it was officially closed. Prostitution remained a business until the 1950s when the state’s attorney shut down many brothels. The last one to close was Pam’s Purple Door in 1980. While gambling and prostitution establishments closed, Deadwood became the only city in the United States to be named a National Historic Landmark in 1964.

During the 1980s, the question of gaming resurfaced, and a petition was introduced to reinstate gaming in Deadwood. In 1986, local business owners agreed to lobby for legalized gaming to create economic development for the community. As gaming moved through the state legislature, the Deadwood City Commission established the Historic Preservation Commission in 1987 to oversee the restoration of historic sites in the community. In 1988, the gaming issue initiative was put on the state ballot. It passed with 64% of the vote and was authorized to begin on November 1, 1989. The introduction of gaming has enabled Deadwood to preserve its historic buildings and dramatically increase tourism. The lure of gaming is not the only draw to Deadwood people are also fascinated by its unique, colorful history. 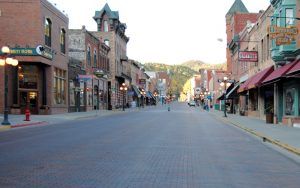 The ownership of the Black Hills is still in question. The Supreme Court decision that attempted to settle the issue by paying the Lakota tribes for the land was not accepted by all tribes. Many of the Lakota are still trying to gain ownership of land sacred to them.

Today, the historic old mining town is a full-service small community full of historic buildings and sites. With its tourist attractions, Deadwood is again booming, although on a quieter scale. Nearby Lead is home to the fabulous Homestake Mine, America’s largest underground gold mine. It is still active and still dominates the economy of Lead. Tours are available and are well worth the price. 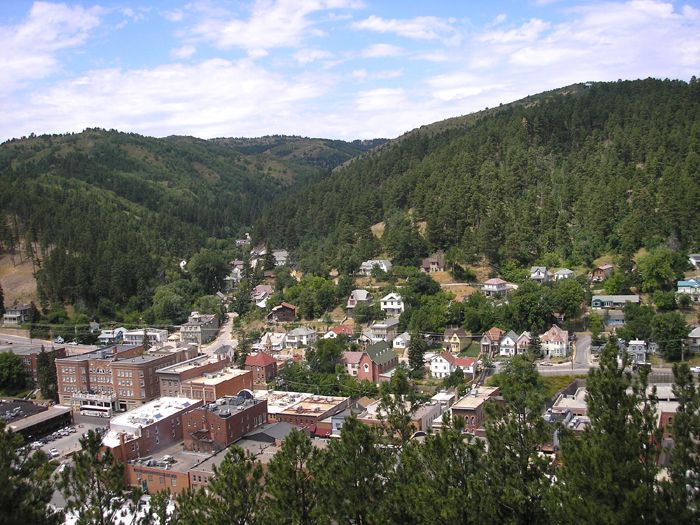