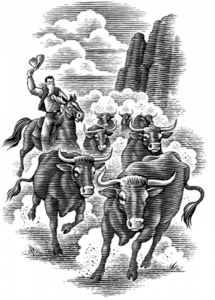 The Jesse Evans Gang, also known as “The Boys,” was an outlaw gang involved in cattle rustling and armed robbery in New Mexico from 1872 to 1879. Jesse Evans led the outlaws, and for a while, Billy the Kid rode with the gang.

When a feud between the Dolan-Murphy faction and John H. Tunstall began, with each trying to control business interests and the cattle industry in Lincoln County, the gang was hired by Dolan-Murphy to act as “enforcers.” After this occurred, Billy the Kid quit riding with the Evans Gang and eventually supported the opposing Tunstall faction, known as the Regulators. Some of the gang’s members were eventually involved in the “posse” that Sheriff William Brady formed to confront John Tunstall, which left Tunstall dead and ignited the Lincoln County War.

After the violence of Lincoln County had finally ended, the gang stayed in the area until February 1879, then fled to Texas after Jessie and gang member Billy Campbell were involved with another murder. In Texas, they continued their rustling and robbing activities until Texas Rangers tracked them down near Presidio on July 3, 1880.

In the ultimate gunfight that occurred, Jesse Evans shot and killed Texas Ranger George Bingham, and gang member John Gross was killed. The members of the gang were finally forced to surrender. Evans was sentenced to prison in Huntsville but managed to escape from a work detail in May 1882 and was never heard from again.