The Clanton family and their ranch hands were a loosely organized gang of outlaws who operated along the Mexican border, stealing cattle, robbing stagecoaches, ambushing teamsters, and committing murder. They were commonly known as the Clanton Gang or simply the “Cowboys.”

Before the Earp brothers arrived in Tombstone, Arizona, their unlawful and reckless behavior was unchallenged. Newman Haynes “Old Man” Clanton and his sons arrived in Arizona Territory in 1873, where they were initially involved in freighting and ranching. However, by the time brothers Tom and Frank McLaury, became their neighbors in 1878, the Clantons were avidly involved in outlaw pursuits. With “Old Man” Clanton at its helm, the “Cowboys” included his sons, Ike, Billy, and Phin; Tom and Frank McLaury, Curly Bill Brocius, Johnny Ringo, Pete Spence, and several others, including many who may not have participated in their outlaw activities, but supported or overlooked them, such as Sheriff Johnny Behan.

Controlling the territory from Tombstone, Arizona, to the Animas Valley of New Mexico, they operated undaunted until Marshal Virgil Earp began to come down on them when he was elected. This led to the Gunfight at the O.K. Corral on October 26, 1881, where Wyatt, Morgan, Virgil Earp, and Doc Holliday fought against Tom and Frank McLaury, Billy and Ike Clanton, and Billy Claiborne.

When the dust settled, Tom and Frank McLaury and Billy Clanton lay dead. While the Earps faired much better, Virgil was shot in the leg, Morgan in the shoulder, and Holliday was grazed on the hip. However, the Gunfight at the O.K. Corral did not end the feud, as the real death toll began after the fight when both sides began to assassinate key members of the opposing factions.

The main members of the gang were:

Other members, friends, and allies of the Cowboy Faction: 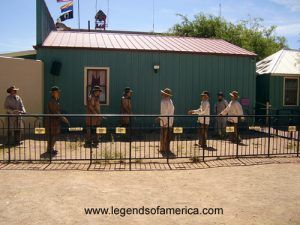