The Black Hills Bandits who operated between 1876 and 1877, was comprised of Sam Bass, Joel Collins, Jack Davis, Tom Nixon, Bill Heffridge, and Jim Berry. These outlaws first robbed some seven stagecoaches in the Deadwood, South Dakota area. Four of these robberies were directed at the same stage line – the Deadwood Stage. On the fifth attempt on March 25, 1877, the outlaws killed the stage driver, Johnny Slaughter. At the sound of the shot, the horses bolted, running towards Deadwood, some two miles away. Folklore has it that the runaway stage was stopped by none other than Calamity Jane as it entered Deadwood. 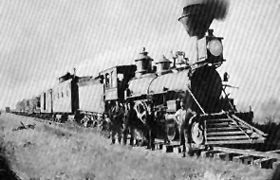 The gang soon decided that their profits from stage robberies were too low and turned their attention to the more lucrative business of robbing trains. Making their way to the isolated station at Big Springs, Nebraska, their first train robbery took place on September 18, 1877. Capturing the station master, John Barnhart, and destroying the telegraph, they forced him to signal the eastbound express train to stop. At 10:48 p.m., the six bandits boarded the train. Finding only $450 in the mail car safe, they then went to rob the larger safe, but it had a time lock preventing it from being opened until the train reached its destination. Though they beat the express messenger brutally in an attempt to get him to open it, the messenger was unable to. However, the outlaws continued to search the train car, finding some wooden boxes, which revealed $60,000 worth of freshly minted $20 gold pieces. Why these were not in the safe is unknown. The bandits then began to systematically rob the train passengers. In the end, they escaped with the $60,000 in freshly minted gold coins, $450.00 from the mail car safe, and about $1,300.00 and four gold watches from the passengers.

Splitting the money up, the outlaws separated into pairs, each heading in different directions. Joel Collins and Bill Heffridge were pursued to Buffalo Station (now Gove), Kansas, where they were killed. Jim Berry was captured near his home near Mexico, Missouri. Wounded during the capture, he died two days later. Sam Bass returned to Texas, where he formed the Sam Bass Gang. On July 21, 1878, he was killed in an ambush by Texas Rangers at Round Rock, Texas. Tom Nixon and Jack Davis were never apprehended.