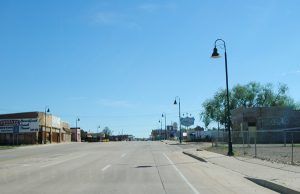 Santa Rosa, New Mexico, known as the “City of Natural Lakes,” is called thus due to the area’s many natural lakes and streams. Situated where the Great Plains rise to meet the Rocky Mountains lies this startling oasis amid the red mesas of the flatlands.

In 1865, the town began as nothing more than a large Spanish Rancho and was called Aqua Negro Chiquita. Around 1890, it took a new name honoring a chapel built by Don Celso Baco, who named it for his wife and Saint Rose of Lima, the first canonized Saint of the “New World.” Guadalupe County was created by the territorial legislature in 1891, with Puerto de Luna as the county seat. Santa Rosa remained a minor community until the Chicago, Rock Island & Pacific Railroad steamed into town in 1901, then became an important transportation hub. Just two years later, Santa Rosa became the Guadalupe County seat. 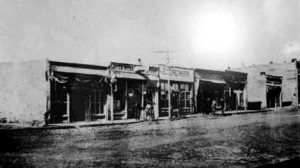 When Route 66 was completed through Santa Rosa in 1930, transportation services again increased in the city. During the days of early Route 66, after travelers had tired of the long, hot, dusty miles, Santa Rosa became known as a welcome and well-known oasis in the desert. Travelers arrived in Santa Rosa to eat, rest, and perform car repairs, if necessary, at the many motels, cafes, and service stations that lined the highway.

The old road ran into town past the 81-foot-deep Blue Hole and Park Lake, a motorist campground and water source during the Depression. Scenes in Rudolfo Anaya’s award-winning novel, Bless Me and John Steinbeck’s Grapes of Wrath took place on Route 66 at the Pecos River Bridge.

In 1935 Phillip Craig and Floyd Shaw built the Club Café with the smiling, satisfied face of the Fat Man. For over 50 years, thousands of hungry Route 66 travelers would stop to enjoy a tasty home-cooked meal. The logo of the Fat Man soon became synonymous with Route 66 in Santa Rosa. 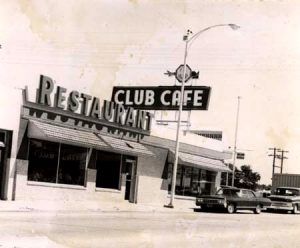 In 1940, when Steinbeck’s epic novel, Grapes of Wrath, was made into a movie, director John Ford used Santa Rosa for the memorable train scene, where Tom Joad (Henry Fonda) watches a freight train steam over the Pecos River railroad bridge, into the sunset.

In 1972, I-40 opened through Santa Rosa, and though the city remained a busy off-ramp, many vintage Route 66 businesses began to die. However, others continued to serve the exiting travelers of I-40, including the Club Café that survived for almost another 20 years. Finally, it too served its last meal in 1991. The Club Cafe stood vacant and soon fell into disrepair with the passing of the years. 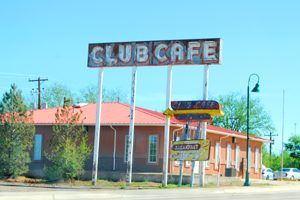 Today, there are plenty of signs of the good ole’ days of Route 66 through Santa Rosa. Look for “billboards” painted on huge roadside boulders and the still-grinning faces of Fat Man billboards before you enter the town. A particularly scenic stretch of Route 66 parallels Interstate 40 and can be accessed from the three exits east of the city. Once you enter Santa Rosa, you can see the Comet Drive-In, Silver Moon, Sun and Sand, and the La Loma Motel. The neon lights will thrill your Route 66 sensibilities if you’re traveling at night. While in Santa Rosa, another “must stop” is the Santa Rosa Auto Museum. 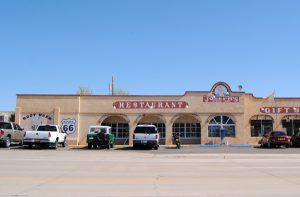 More activities abound at the area lakes, where you can scuba dive at the Blue Hole, fish at natural Perch or Park Lakes, and enjoy all the amenities of a large man-made lake, such as boating, skiing, and camping at Santa Rosa Lake State Park. A side trip well worth the trip is the ancient adobe village of Puerto de Luna, just ten miles south of Santa Rosa.

In the early days of Route 66, the old pre-1937 alignment of Route 66 in New Mexico, sometimes referred to as the Santa Fe Loop began 18 miles west of Santa Rosa at the junction of I-40 (Route 66) and U.S. Highway 84. The highway then traveled northwest through the ghost town of Dilia before reaching Romeroville, where the path turned southwest, following the old Santa Fe Trail through the Pecos River Valley and onto Santa Fe. 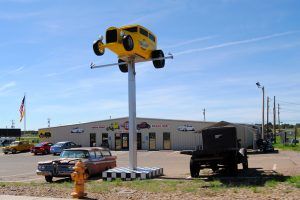 Here, you will need to choose which alignment you will take westward. Both alignments are a delight as you pass by numerous vintage peeks of the Mother Road, historic places, ghost towns, and beautiful views.

To Clines Corners or Dilia