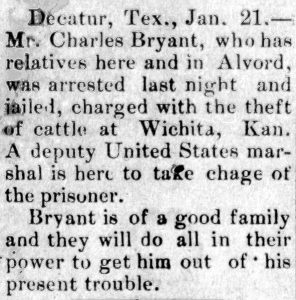 Charles “Charlie” Bryant, aka: Black Face Charlie was an Oklahoma outlaw that rode with the Dalton Gang.

Born in Wise County, Texas, Charles worked as a cowboy from the time he was just a teenager. When he was still very young, he got into a gunfight and when a pistol was fired next to his face, the grains of black powder permanently disfigured him, hence the nickname. Charlie joined the Dalton Gang in 1890 and was with them when they robbed a train near Wharton, Oklahoma on May 9, 1891, as well as the train robbery near Red Rock some weeks later.

Bryant was said to have loved gunplay of any kind and the Daltons often found him unreliable, he was so quick with the “trigger finger.” While the gang was camped out near Buffalo Springs, Oklahoma, Charlie got sick and was taken to see a doctor in nearby Hennessey. While he was recuperating in a hotel, U.S. Deputy Marshal Edward Short learned of his whereabouts and soon made an arrest. On August 3, 1891, Short and Bryant boarded a train so that Short could deliver the outlaw to the federal district court in Wichita, Kansas. When Short had to relieve himself, he made the mistake of leaving Bryant under the guard of the express car messenger. The messenger, seeing that Bryant was asleep, laid down the gun and went about his work. When Short returned, Charlie, who had only been pretending to be asleep, had just grabbed the revolver and shot the marshal in the chest as he reentered the car. Short immediately returned fire with his rifle, blowing Bryant’s chest away and severing his spinal column. By the time the train reached Waukomis, both men were dead.