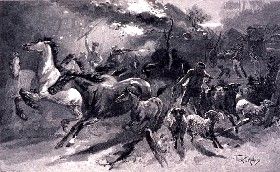 Henry Borne (also spelled Bourne), more often called Dutch Henry, was an outlaw and one of the most prevalent horse thieves and cattle rustlers of the Old West.

Henry was born to German immigrant parents on July 2, 1849, in Manitowoc, Wisconsin. In the 1860s, he moved with his family to Montague, Michigan, where he worked as a lumberjack.  Somewhere along the line, he joined the Seventh Cavalry but quit in the late 1860s.  Shortly afterward, Borne was arrested at Fort Smith, Arkansas, for stealing twenty government mules.  He was sentenced to prison but escaped just three months later.

By 1869 he had moved to Kansas, where for the next six years he hunted buffalo and worked as a freighter in Kansas and eastern Colorado. By the spring of 1874, he had moved on to the Texas Panhandle and participated in the Second Battle of Adobe Walls. At the time of the Indian attack, Borne was in the Myers and Leonard store, along with Fred Leonard, Charley Armitage, Bat Masterson, and several others. One account of the battle credits him with killing the black bugler who was fighting with the Indians. Afterward, Borne served briefly as a civilian scout for the army. He was reportedly assigned to General George Armstrong Custer but soon quit, declaring that Custer was the “meanest man” he ever knew.

Soon after the close of Texas’ Red River Indian War in 1875, Dutch Henry emerged as the leader of a horse-stealing ring operating in a vast area from Kansas to eastern Colorado to New Mexico and the Texas Panhandle.

Although the actual number of Borne’s followers is disputed, it has been estimated to be as many as 300.  Henry specialized in Indian ponies and government mules, for which he found a lucrative market.  At one time, Borne declared that he had never taken “a white man’s horse.”

Nevertheless, newspaper reports embellished his reputation as a “road agent and murderer.” In 1877, after establishing the JA Ranch, Charles Goodnight met with Dutch Henry and eighteen members of his band camped on Commission Creek near Fort Elliott, Texas. They made a pact, sealed with a drink, which bound the outlaw leader not to raid below the Salt Fork of the Red River, the northern boundary of Goodnight’s range. Borne remained true to his word, and Goodnight left him alone.

Demands that Dutch Henry be brought to justice increased. More than once, he had managed to escape from jails and elude law officers, but in December 1878, Las Animas County Sheriff, R. W. Wootton, arrested him at Trinidad, Colorado.

There, Borne was tried for stealing mules and ordered transferred to the Bent County Jail. Instead, Bat Masterson took him to Dodge City, Kansas, under a warrant for grand larceny. However, Borne was acquitted in January 1879.  Soon, he drifted on to Las Vegas, New Mexico, where he was said to have been a member of the notorious Dodge City Gang.  By that time, he had become so good at stealing horses that one legend says that he once sold a sheriff his own recently stolen horse. Their term “Dutch Henry” soon began to be known as a stolen horse.

Finally, the State of Arkansas caught up with him, putting him back in prison for the Fort Smith robbery years before. However, his time behind bars was apparently brief, as by the late 1880s, he was known to have been prospecting at Summitville, Colorado, and opened the successful Happy Thought Mine in Creede.

In the 1890s, he filed on 160 acres on the West Fork of the San Juan River twenty miles from Pagosa Springs, Colorado. The acreage would eventually become known as Borne’s Lake.  In July 1900, Henry married Ida Dillabaugh and fathered four children.  In his later years, he talked little about his past and for seven years did not even keep a gun in his home, claiming that he had “had all of the killing that he wanted.” Borne died of pneumonia on January 10, 1921, and was buried at Pagosa Springs, Colorado. 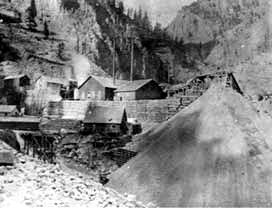