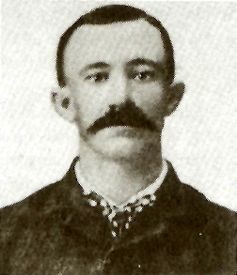 William “Little Bill” Raidler (18??-??) – An outlaw, he joined the Doolin-Dalton Gang in Oklahoma in 1892 and was captured in 1895 by U.S. Deputy Marshals. He was sentenced to ten years in prison in Lansing, Kansas. When he was diagnosed with a terminal disease, he was pardoned to die among his friends and family.

William Randall – An outlaw horse thief, he shot and killed Constable Joe Carson on January 22, 1880 in Las Vegas, New Mexico, and was then killed himself.

Frank Rande, aka: Charles Van Zandt – An outlaw in Iowa, Illinois, and Indiana in the 1870s, he was shot and killed by guards while in prison in March 1884.

Charles T. Ray, aka: “Pony” Deal (or Diehl) – A former member of the John Kinney Gang, Diehl joined the Jesse Evans Gang during New Mexico’s Lincoln County War. Afterward, he went to Arizona and joined the Clanton Cowboys. He was sought after by Wyatt Earp during the Earp Vendetta Ride but wasn’t found.

Joseph Raynolds – After stealing a horse from Captain Jack Crawford, he was captured, convicted, and served 18 months in prison.

Ned Ray (18??-1864) – Ray was a Bannack, Montana, acting sheriff when Henry Plummer was absent and thought to have been a member of Henry Plummer’s gang of Innocents. He was hanged by Montana Vigilantes.

Bob Reagin – Outlaw member of the Little Dick West Gang, he was captured by Heck Thomas.

Len Redfield – A suspected outlaw in Arizona, he was lynched in 1877 for allegedly robbing a stagecoach.

James Edwin Reed – The son of Belle Starr and Jim Reed, he was a known horse thief and suspected stagecoach and train robber.

Jim Reed (1845?-1874) – Rode with Quantrill’s Raiders during the Civil War. He married Belle Starr, was involved with the James-Younger Gang and Tom Starr’s gang. He was killed by a deputy sheriff in Paris, Texas, in August 1874. 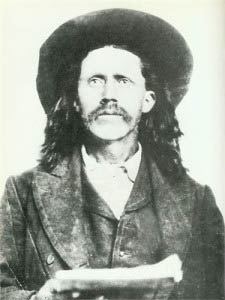 William Reeves – Thought to have been a member of Henry Plummer’s gang of Innocents. He was shot and hanged by Montana Vigilantes.

Reno Brothers (18??-1868) – A group of criminals that operated in the Midwestern United States during and just after the Civil War.

Richard Remine – An outlaw, he was hanged at Silver City, New Mexico, in March 1881.

Adam C. Ricchetti – A bank robber who rode with “Pretty Boy” Floyd, he was put to death in the gas chamber in Jefferson City, Missouri, on October 7, 1938.

Eva Ricchetti-Simpson – The sister of Adam Ricchetti, she was wanted for robbery, forgery, car theft, and child abandonment.

Johnny Ringo [John Ringgold] (1850-1882) – Ringo earned a deadly reputation in numerous gunfights and fought with Scott Cooley in the Mason County War. Later he showed up in Tombstone, Arizona, where he hooked up with the Clanton Gang. Later he was found dead, some say at the hands of Wyatt Earp or Doc Holliday.

Andrew L. Roberts, aka: Buckshot Roberts, Bill Williams (18??-1878) – A Texas Ranger, outlaw, and member of King Fisher’s Gang in New Mexico, Roberts heroically stood up against Billy the Kid and the Regulators in 1878 in what’s known as Buckshot Roberts Last Stand.

“Frank Pierce” Roberts –  A bootlegger in Indian Territory, he was the brother-in-law of Pink and Jim Lee and was killed by posse men.

Ben Robertson, aka: Ben Burton, Ben Wheeler (1854?-1884) – A lawman and outlaw, Robertson, originally from Texas, made his way throughout the west until he settled in Kansas, where he went to work for Marshal Henry Brown as a deputy in Caldwell. Excellent lawmen, they suddenly turned outlaw and robbed a bank in Medicine Lodge, Kansas, and were lynched on April 30, 1884.

John Robinson – A black murderer in Oklahoma, he was wounded when captured by U.S. Deputy Marshal Bass Reeves. He died at Fort Smith, Arkansas of his injuries.

Jesus Rodriguez – A gunman and horse thief, he fought with the Regulators in the Lincoln County War of New Mexico. Afterward, he disappeared.

William Roe – When ex-lawman Roe committed murder, he was hanged in Grimes County, Texas on May 26, 1888.

Annie Rogers, aka: Della Moore, Maud Williams (18??-19??) – Involved with Kid Curry, Annie was a “member” of Butch Cassidy’s Wild Bunch. She was charged with Curry as an accomplice, imprisoned in the Tennessee Penitentiary, and released on June 19, 1902.

David Rogers – An outlaw, he was arrested in 1889 for complicity in the robbery of an Army paymaster in the New Mexico Territory.

Dick Rogers – An outlaw, he attempted to break a friend from jail on March 13, 1885, and was killed.

Jim Rogers – Brother to Bob Rogers and member of his gang.

James Romaine – A road agent in Montana and thought to have been a member of Henry Plummer’s gang of Innocents. He was hanged by Montana Vigilantes.

Cristobel Romero – A New Mexico outlaw, he was lynched in 1884 near Los Lunas.

Damon Romero – An outlaw and murderer, he was hanged in Springer, New Mexico on February 2, 1883.

E.C. Rucker – Though a New Mexico lawman, he aligned with the outlaw, John Good.

David Rudabaugh, aka: Dirty Dave (1854-1886) – Better known as an outlaw, Rudabaugh briefly served as a lawman in Las Vegas, New Mexico. However, this was a part of the crooked Dodge City Gang. He rode with the likes of the Roark Gang, Doc Holliday, and Billy the Kid. He was shot and beheaded by vigilantes in Mexico in 1886.

Bill Rudolph, aka: The Missouri Kid – An outlaw and murderer, he robbed banks in Missouri with George Collins in the 1900s and was captured in 1904 and hanged on May 8th.

John D. Ruggles (1859-1892) – Getting into trouble at an early age, John Ruggles served time in prison for robbery when he was still a young man. When he was released he and his brother, Charles, robbed the Redding & Weaverville stage just outside Redding, California. In the process, Charles was shot in the face and the stage guard was killed.

Charles L. Ruggles (1870-1892) – Charles Ruggles came from a good family, attending college, and never committed a crime until his older brother, John, was released from prison. John, who had spent his life committing robberies, convinced Charles to rob a stagecoach with him.

William “Bill” Ryan (18??-1889) – Also known as Tom Hall and “Whiskey Head” Ryan, because he was a heavy drinker, Ryan was a member of the James Gang. He was sentenced to prison for train robbery, and after he was released, he was found dead in the woods with his head smashed.

Time Line of the Old West