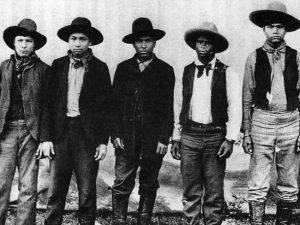 The Rufus Buck Gang, led by Rufus Buck, was a Creek Indian gang that also included Sam Sampson, Maoma July, and brothers Lewis and Lucky Davis. All of them had been apprehended on minor offenses and served time in the Fort Smith, Arkansas jail before going on their crime spree in the summer of 1895.

With the desire to become known as the most famous outlaws in the Wild West, Buck allegedly boasted that “his outfit would make a record that would sweep all the other gangs of the territory into insignificance.” Beginning with stockpiling a small cache of weapons in Okmulgee, Oklahoma, their spree began on July 30, 1895, when they robbed a town grocery store. When U.S. Deputy Marshal Garrett, one of the few black marshals in Indian Territory, responded to the call, the bandits shot him down. On their way from that murder, they abducted and raped a woman named Mrs. Wilson.

They began to hold up several stores and ranches in Indian Territory for the next two weeks, preying on white and Indian settlers indiscriminately. In one incident, an elderly salesman named Callahan, who the gang had just robbed, was offered a chance to escape if he could outrun the gang. When the old man was successful, the brutal teens killed his assistant in frustration. Later, they killed a man named Gus Chambers when he resisted the gang’s theft of horses. They then robbed a stockman, taking his clothing and boots, and fired at him as he fled naked. Two days later, the gang-raped Rosetta Hansen while they held her husband at bay with Winchesters.

They were finally caught up with outside Muskogee, Oklahoma, by a combined force of U.S. Deputy Marshals and the Creek Lighthorse police, led by Marshal S. Morton Rutherford on August 10. The ensuing gunfight between the lawmen and the outlaws lasted almost a full day before the teens finally surrendered. After their capture, the gang was almost lynched. Though the Creek Nation wanted to hold the gang for trial, the U.S. Marshals prevailed, and the outlaws were taken to Fort Smith, Arkansas, to face “Hanging” Judge Isaac Parker.

When they were brought to court later in the year, they were convicted of rape and murder and sentenced to die by Parker. However, the initial verdict was appealed, and the execution was delayed. However, in the end, their appeal failed, and Parker was allowed to re-sentence them to death. The execution of the five members of the Rufus Buck Gang on July 1, 1896, was the second to last execution to occur at Fort Smith. The Buck Gang were the only men to die on the gallows in Fort Smith for rape.