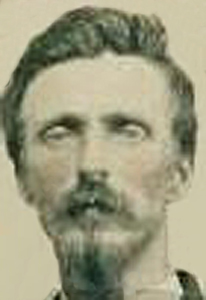 Hyman G. Neill, better known as Hoodoo Brown, was the leader of the Dodge City Gang in Las Vegas, New Mexico, in 1879 and early 1880.

Hyman G. Neill, hailed from a good family in Lexington, Missouri. A traditional southern family, Neill’s father came from Lee County, Virginia, in the 1830s. In Lexington, he practiced law and would have joined the Confederacy at the outbreak of the Civil War; however, he said that he could not disavow his oath to support the Constitution and fought with the Union, eventually becoming a major. Due to this choice and his wife’s death, he moved his family to Warrensburg, Missouri, after the war.

As a teenager, Hoodoo worked as a printer’s devil on the newspaper in Warrensburg until one day, having been dispatched to get rags needed for printing, he jumped on a freight train going by the back door of the office, stating he was leaving “to get your durn rags.”

In 1872 he was hunting buffalo and hauling lumber from Russell, Kansas, to Dodge City. Described as tall, thin, with light hair, a small mustache, and a rakish look, he was also known to be a small-time gambler and confidence man. Before long, he drifted on to Colorado, where he worked in the silver mines with a friend, then took off for Mexico, where they formed a ragtag opera company for the edification of the villagers.

By the time Hoodoo arrived in Las Vegas, New Mexico, the town was quickly earning a reputation as a  lawless place, filled with outlaws, bunko artists, murderers, and thieves. In 1879, supported by other recent immigrants to the town, he was elected as Justice of the Peace for East Las Vegas. Also serving as coroner and mayor, he soon gathered several former gunfighters from Kansas and formed the police force. These new “peace officers,” called the Dodge City Gang, began to police new arrivals on the railroad. However, the members were as lawless as those they “policed.” The Dodge City Gang included J.J. Webb as the town marshal, “Mysterious Dave Mather,” Joe Carson, and “Dirty Dave” Rudebaugh, among others.

From 1879 through 1880, Hoodoo would lead his “gang” in stagecoach and train robberies, murder, thievery, and municipal corruption. As Coroner, Hoodoo installed his gang on the “Coroner’s Jury,” which determined as to whether a killing was a homicide or self-defense, which became a convenient tool for covering up their crimes.

In March 1880, an article in the Chicago Times described Brown as “one of the worst class of low gamblers.”

By the summer of 1880, Las Vegas had had enough, assembled a party of vigilantes, and eventually drove Brown and the rest of his gang from the state. Hoodoo was said to have stolen money from a dead man before moving on to Houston, Texas. However, shortly after he arrived, he was arrested and jailed. While he was there, he was visited by the widow of a former Las Vegas deputy who had been killed two months earlier.

The Parsons Sun reported, “The meeting between the pair is said to have been affecting in the extreme, and rather more affectionate than would be expected under the circumstances.”

Another newspaper, the Parsons Eclipse, added “The offense committed at Las Vegas, as near as we can gather the facts relating to it, was murder and robbery, and the circumstances connected with the arrest here would indicate that the lesser crime of seduction and adultery was connected with it.”

In the meantime, Hoodoo hired two local attorneys and was released when the Texas authorities were unable to establish charges against him.

The Chicago Times soon reported that Brown and the widow who had visited him “have been skylarking through some of the interior towns of Kansas ever since.”

According to reports from a Hoodoo descendent, Hyman G. Neill died in Torreon, Mexico, where he left a common-law wife and a son. Two of his brothers traveled to Mexico and brought back Hoodoo’s remains, as well as his son, who was raised in Lexington, Missouri. Hoodoo was buried in the family plot in Lexington under the name of Henry G Neill.

Records list a Mrs. Hoodoo Brown living in Leadville, Colorado, some years later. According to reports, Elizabeth Brown was a hard drinker and a well-known practitioner of the black arts. She was also said to have married a gambler named Hoodoo Brown, who was shot and killed in a gambling dispute. Was this Hoodoo’s common-law wife? We shall never know.

“The baddest cowboy of them all was Hoodoo Brown.” 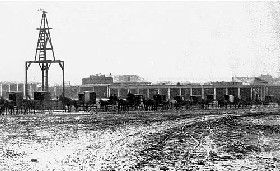