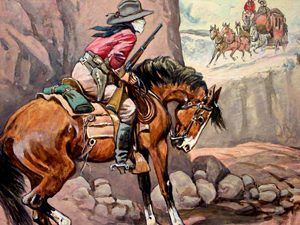 A personal favorite, The Story of the Outlaw, by Emerson Hough, includes historical narratives of famous outlaws, stories of noted border wars, vigilante movements, and armed conflicts on the frontier.

The Story of the Outlaw was first published by the Curtis Publishing Co. in 1905 and published again two years later by the Outing Publishing Company, New York, in 1907.

The author of some 34 books and countless magazine articles, Emerson Hough, wrote both factional accounts and historical novels of life in the American West. His works helped establish the Western as a popular genre in literature and motion pictures.

This is the only book, at this time, that appears in its entirety on Legends of America. That being said, readers should note that Hough’s writings, as they appear here, are not verbatim as they have been edited for spelling, grammar, clarity, and ease of the modern reader.