Butch Cassidy’s bandit gang, called the Wild Bunch, operated in Colorado, Wyoming, Montana, Idaho, Utah, and Nevada for nearly five years, successfully robbing banks, trains, and stages throughout the area. The group, which was usually made up of about ten people, varied throughout the years in its members, as outlaws and girlfriends came and went. But the Wild Bunch, sometimes referred to as Butch Cassidy’s Gang or the Hole in the Wall Gang, was always led by Cassidy, whose real name was Robert Leroy Parker, and Harry Longabaugh, better known as the “Sundance Kid.”

The gang utilized several hideouts, including the Hole in the Wall in the southern Big Horn Mountains of Wyoming, Brown’s Hole in a desolate valley near Wyoming, Colorado, and Utah, and the Robber’s Roost located in the desert of southeastern Utah. 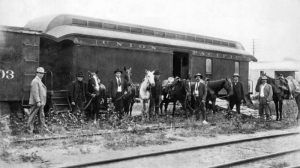 Probably the most colorful and best known “Wild West” railroad crime was pulled off by the gang on June 2, 1899, near Wilcox, Wyoming, when several members robbed the Union Pacific Overland Limited train. They forced the crew to uncouple the express car and remove it some distance from the passenger cars. Once this was done, the safe in the express car was dynamited, and in the process, the entire car was destroyed. Afterward, a select group of railroad special agents formed a posse called the “Rangers” and chased after The Wild Bunch.

As communication improved throughout the country, the robberies became more difficult, finally splitting up after their last train robbery in the summer of 1901. Avidly pursued by the Pinkertons, Butch Cassidy, the Sundance Kid, and Etta Place fled to Argentina in 1902. Some say the outlaw pair were killed in Bolivia, but others say they finally made their way back to the United States, where they lived anonymously until their deaths.

Express car blown up by “The Wild Bunch” at Wilcox, Wyoming in June 1899,

Other gang members reportedly met violent deaths in diverse locations in Kansas, Missouri, Texas, Utah, and Colorado. Harvey Logan, one of the gang leaders, was arrested at Knoxville, Tennessee, in 1902 on a Federal charge stemming from another crime. He escaped in 1903 and pulled his last job on June 7, 1904. Along with two other masked men, he reportedly held up a Denver & Rio Grande train near Parachute, Colorado. Their only loot consisted of a worn gold watch taken from an express guard. The next day, members of a posse wounded Logan, and he reportedly took his own life.

Hole in the Wall – Outlaw Hideout

Harvey Logan, aka “Kid Curry” – The Wildest of the Wild Bunch