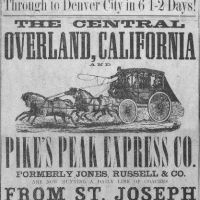 Jules Beni (sometimes referred to as Jules Reni) was a western outlaw who was the corrupt manager of the Central Overland, California & Pike’s Peak Express Company in Old Julesburg, Colorado.

The half-French Canadian, half-Indian trapper, Beni (pronounced Ben-eye) had established a small trading post and saloon along the Upper Crossing of the South Platte River in 1858. Prior to building his trading post, situated right on the border of present-day Colorado and Nebraska, Beni had been active in trading with the Indians. However, with the nearby California–Oregon Trail filled with emigrants headed west, he found it more profitable to trade with the emigrants.

The grizzled and sullen Beni, who was in his fifties at the time, was described to be bearlike in stature, was known to have a keen mind, was described as shrewd and mean, and had a reputation of a killer. He was more often known to locals and travelers as “Old Jules” due to his age.

Soon, more people settled in the vicinity and a cluster of a half-dozen buildings rose up as it became a rendezvous point of traders, Indian fighters, buffalo hunters, and adventurers, as well as, desperados and bandits. It soon became the largest settlement along the 350-mile stretch between Fort Kearny, Nebraska and the new mining town of Denver, Colorado. The settlement became known as Julesburg, for its founder. 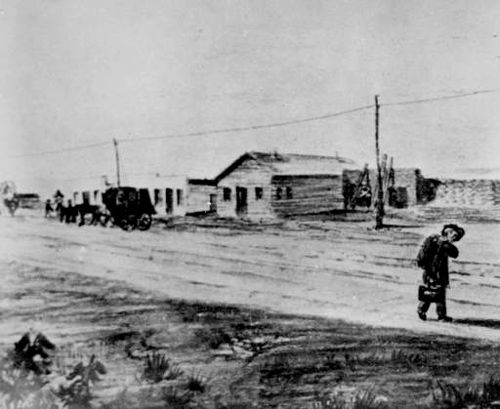 In the summer of 1859, the struggling Jones & Russell Stagecoach Line chose Julesburg to be a site where its two westbound lines would diverge – one to Denver, Colorado and the other to Salt Lake City, Utah.

When the stagecoach line came through, “Old Jules” Beni seemed the logical choice to manage the company’s station there. Beni quickly became a noted and conspicuous frontiersman in the early staging days between the Missouri River and Denver and Salt Lake City.

In the meantime, a number of atrocities had been taking place along the nearby Oregon Trail including wagons being frequently looted and burned, and solitary travelers murdered. The outrages were naturally blamed on the Indians, but the presence of white men among the raiding parties was testified to by more than one survivor. Released prisoners also told of white men who came and went freely in the Indian camps, sharing in the stolen loot. Rumor grew that Jules himself was at the bottom of the business and it was remarked that the richest trains were almost invariably attacked and burned after leaving Julesburg.

After Jules became the station manager, crime increased as the stagecoach lines were being increasingly robbed, particularly those stages carrying money and other valuable cargo. There were also problems with the station itself, as horses, supplies, and other valuable company property began to disappear and the mail was often misrouted or lost.

Partly as a result of this mischief, Jones & Russell’s business failed in October 1859 and was reorganized as the Central Overland, California & Pike’s Peak Express Company. William H. Russell remained as president of the reorganized company and in 1860 would introduce the Pony Express.

The express company needed to clean-up its unprofitable divisions and in the fall of 1859, Joseph “Jack” Slade, who had a reputation of being a fearless man on an extremely tough frontier, was hired as superintendent of the Central Overland’s Sweetwater Division, which covered nearly 500 miles from Julesburg to Rocky Ridge, Wyoming. Though one of the smaller divisions of the company, it was considered the most dangerous section of the company’s 1,200-mile route between the Missouri River and Salt Lake City.

Slade immediately proceeded to find problems within the division and clean it up by upgrading the livestock, personnel and stage stations. It didn’t take long to determine that Jules Beni was a thief and scoundrel, and Slade forced him out of his position as station master.

Beni, cowed by Slade’s reputation, stepped aside peacefully and it appeared that the two were initially civil as Jules continued to run his trading post and ranch in Julesburg. That was not the case, however, as Jules was still simmering from having Slade take over “his town” and having lost his job as station-master. Jules’ anger increased when Slade rode into one of Beni’s corrals and appropriated two horses he believed Jules had stolen from the company. Afterward, Jules’ swore vengeance upon his nemesis.

In the early months of 1860, Slade was relentlessly working to prepare for the scheduled April 3rd launch of the Pony Express, which was set to run its first cross country delivery from St. Joseph, Missouri to San Francisco, California.

However, Slade’s efforts would be stalled in March, about three weeks before the Pony Express was set to run. Making a routine inspection of the stage stations on his divisions, he arrived in Julesburg. When he started towards Beni, unarmed, one of the men of the state station yelled out to him: “Look out, Slade, Jules is going to shoot you!” Before anyone could react, Beni shot three bullets from his six-shooter into Slade’s body. Slade, who appeared to be mortally wounded, staggered towards the stage station. But, Beni was not yet done. He then reached into the door of his cabin and brought out a double-barreled shotgun to finish the job. After emptying two barrels of buckshot, he turned to the horrified stage drivers and said: “There are some blankets and a box – you can make him a coffin if you like.”

Slade was then carried into the station and placed in a bunk, with bullets and buckshot all through his body. No one who witnessed the attack supposed he could survive an hour. Jules, who believed that Slade would never recover stated within Slade’s hearing, “When he is dead, you can put him in one of these dry-goods boxes, and bury him.”

To this statement, Slade rose in his bunk and exclaimed “I shall live long enough to wear one of your ears on my watch-chain. You needn’t trouble yourself about my burial.”

In the meantime, the overland coach arrived, bringing with it, the superintendent of the road. Hearing of the assault and finding Slade writhing in mortal agony, he ordered that Jules be immediately arrested and executed. The men then built an improvised gallows and marched Beni to the site. Though they tried three times to hang the shooter, Jules didn’t die. The superintendent then ordered Beni to leave the country or be hanged by an informal court. Beni immediately fled to Denver and then farther west.

A Pony Express rider then galloped 175 miles to Fort Laramie, Wyoming to fetch a military surgeon. The doctor arrived a day or two later, probably astonished to find Jack Slade still alive, and removed the pistol balls from Slade’s body. When Slade had recovered enough to travel, the Central Overland Company transported him almost 1,000 miles by stagecoach and rail to St. Louis, Missouri, where skilled surgeons removed most of the buckshot from his body.

Amazingly, Slade was able to return to work in June. By that time, Beni had disappeared. But it was not yet over.

After Slade returned to his post he was told of repeated boasts by Beni that he would come back to finish the job of killing him. At Fort Laramie, Wyoming he talked over the situation with army officers who advised Slade to catch Jules and kill him, because there would be no peace for the stage company until he was really gone.

Beni returned to the area in August 1861 and hearing of his return, Slade dispatched four of his men on horseback to the area where Beni was said to be, promising a reward of $500 if he was captured alive. Within a short time, the men delivered with Jules tied over a pack-saddle to the Cold Spring Pony Express Station in Wyoming. There, Jules was tied up to a post in the corral, awaiting Slade’s arrival and judgment. When Slade arrived he shot Beni several times and cut his ears off. These, he was said to have kept as souvenirs, using one of the ears as a watch fob.

Afterward, Slade’s exploits spawned numerous legends and his ferocious reputation, combined with a drinking problem, caused his downfall. He was fired by the Central Overland for drunkenness in November 1862. He then made his way to Montana, where during a drunken spree in Virginia City, he was lynched by local vigilantes on March 10, 1864, for disturbing the peace.

Julesburg – Wicked in the West