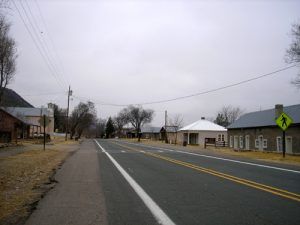 A walk down Lincoln, New Mexico’s Main Street is a step back into the Wild Wild West. It was here that such men as Billy the Kid and Pat Garrett left their marks; here, that Indians, Mexican American settlers, gunfighters, and corrupt politicians made themselves known; it was in this small settlement that the violent Lincoln County War erupted, which resulted in the deaths of a number of men and made Billy the Kid a legend.

And today, it is here that the modern tourist can still taste the flavor of those earlier times in century-old adobe buildings, hear the tales from the voices of old-timers, and walk those very same dusty streets that were made infamous in the late 1800s.

The area that would become Lincoln was roamed only by Native Americans until Spanish Pioneers began to settle the lush green valley of the Rio Bonito around 1849, first calling their new “city” Las Placitas del Rio Bonito, meaning “the village by the pretty river.”

However, when Lincoln County was formed in 1869, and the fledgling settlement became the new County Seat, the town’s name was changed to Lincoln.

Before long, the county and the town were populated by a number of cattle barons and cowboys, in addition to the Spanish settlers.  In the early 1870s, two men, by the names of Lawrence Murphy and James Dolan owned the only store in Lincoln County, the largest county in the nation, covering 1/5 of New Mexico territory. The pair not only owned Murphy & Dolan Mercantile and Banking, they also owned large cattle ranches, and having influential territorial ties to officials in Santa Fe, the merchants were able to obtain several lucrative contracts with the military at Fort Stanton.

Before long, the two men monopolized the trade of the county, controlling pricing, making immense profits on their goods, and virtually having a hand in nearly every part of the economy of the large county. The merchants, along with their allies, which included local law enforcement, were familiarly known as “The House.”

For obvious reasons, Murphy and his allies were disliked by the small farmers in Lincoln County, as they were forced to pay high costs for their goods, while at the same time, accepting low prices for their cattle.

When a rival store was set up in 1876 by Alexander McSween and John Tunstall called H.H. Tunstall & Company near the one owned by Dolan and Murphy, it soon spawned what became known as the Lincoln County War. The feud between the two factions for political and economic control of the area would last for the next two years, sometimes fought in courtrooms, but more often through cattle rustling, gunfights, and murder. The feud came to a head when John Tunstall was murdered on February 18, 1878. Battling on the side of Tunstall and Company, referred to as the “Regulators,” was none other than Billy the Kid, who had been employed by Tunstall as a ranch-hand.

The feud became an all-out “war” as Tunstall’s employees swore to avenge their boss’s murder and began to retaliate against the “House.” The Lincoln County War came to a climax in July 1878 in a five-day battle when the Regulators holed up in McSween’s house and the Ellis Store.  Soon, they were besieged by the Dolan faction in a battle that wouldn’t end until the arrival of U.S. Troops. When the smoke had cleared, five Regulators, including AlexanderMcSween, had been killed and several wounded. Of the Dolan faction, one man was killed and several wounded.  The “House” declared a victory as the Regulators fled the area. The famous battle made Billy the Kid not only a household name but also a fugitive.

President Rutherford B. Hayes called Lincoln’s main street “the most dangerous street in America,” and in September 1878, he removed New Mexico’s corrupt Governor Axtell from office and appointed Lew Wallace as the new governor. The United States attorney, the sheriff, and the local military commander were also replaced. At first, Governor Wallace felt that conditions in Lincoln County might call for martial law. The President, however, advised lawbreakers to return to peace. On November 13, 1878, Governor Wallace proclaimed an amnesty for all those involved in the Lincoln County War if they were not already under indictment. This proclamation, however, did not include Billy the Kid.

The fugitive Billy soon formed a gang, referred to as the “Rustlers” or simply Billy the Kid’s Gang, and survived by stealing and rustling cattle. Billy and his gang would be actively pursued by Pat Garrett, especially after Governor Wallace put a $500 reward on his head in December 1880.

Garrett and his posse finally captured Billy the Kid and his gang of “Rustlers” on December 23, 1880. After a trial in Mesilla, New Mexico, in April 1881, Billy was taken to Lincoln, where he was scheduled to be hanged on May 13th. However, Billy escaped on April 28th, killing both of his guards while Garrett was out of town.

It would be his last escape, however, as Garrett tracked him down to Fort Sumner, where he shot and killed the teenage outlaw on July 14, 1881.

During Lincoln’s violent heydays, more than 450 people made their homes there, and when the town calmed down, Lincoln continued to serve as a supply center for area ranches and mines and, by 1888, reported a population of about eight hundred residents. However, when the railroad moved to nearby Carrizozo, the town began to decline in population and by 1909 lost its county seat status to Carrizozo.

Over the decades, the population continued to decline to its current population of only about 75. However, amazingly, many of its old buildings were preserved. Today, the old settlement is officially referred to as the Lincoln State Monument and is the most widely visited state monument in the state. The historic site includes 17 structures and outbuildings, three of which are museums.

Representing the Territorial style of adobe architecture, historic buildings line both sides of Lincoln’s mile-long Main Street. The gurgling Rio Bonito River still forms the northern boundary of the town that has not been marred with commercial gas stations or convenience stores.

The main visitor’s center is located near the east end of town on the north side of the highway, exhibits the role in Lincoln’s history of Apaches, Hispanics, Anglo cowboys, Buffalo Soldiers, and details the Lincoln County War. A brief video further presents Lincoln’s history in an old-fashioned theater.

Lincoln’s highlight is the old Lincoln County Courthouse on the west end of Main Street, which highlights Billy the Kid’s escapades and his escape from the courthouse, complete with a famous bullet hole made during his flight.

Other buildings that can be toured include the Montaño Store, the 1887 La Iglesia de San Juan-Bautista Mission, which still provides services for parishioners; Tunstall Museum and post office, which contains displays of original 19th-century merchandise in the original shelving and cases.

More old buildings in the town include Dolan’s old home, the defensive torreón (tower) for the village, and the Wortley Hotel, once owned by Sheriff Pat Garrett. Here was where Deputy Ollinger had his last supper before Billy the Kid shot him and Deputy J.W. Bell down. The historic hotel now serves as an inn and restaurant. The Juan Patron House has been converted into a bed-and-breakfast inn.

Old Lincoln Days, held on the first full weekend in August, provides living-history demonstrations of traditional crafts, musical programs, and food booths throughout the village. An annual folk pageant, The Last Escape of Billy the Kid, presented outdoors since 1949, portrays a highly romanticized version of the Lincoln County War during August weekends. Other special events are scheduled throughout the year.

From about March to November, visitors can ride in a four-horse-drawn Lincoln County Overland Stage. The morning and afternoon rides provide for 2 hours rides, which cover 5 ½ miles of an old stagecoach route from near Lincoln to the Old Fort Stanton cemetery. 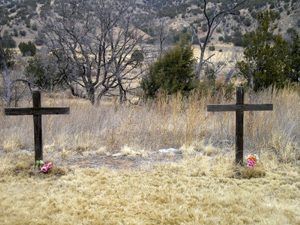