William M. “Bill” Doolin, aka Will Barry was the leader of an Oklahoma outlaw gang that was known as the Doolin-Dalton Gang, Oklahombres and the Wild Bunch.

More than 100 years ago in a quiet little town in the Oklahoma Territory, members of the infamous Oklahombres gang squared off against a posse of deputies in one of the deadliest confrontations in the history of the U.S. Marshals. By the end of the gunfight, nine men lay dead or wounded, and the people of Ingalls had a vivid picture of Western lawlessness and the harsh means needed to restore justice.

William “Bill” M. Doolin was born in 1858 in Johnson County, Arkansas to Michael Doolin and Artemina Beller Doolin.  At the age of 23, he drifted west, working at odd jobs until he landed a job as a cowboy at the H-X Bar Ranch on the Cimarron River in Indian Territory in 1881. The ranch was owned by a Texan named Oscar D. Halsell, who took a liking to Doolin, teaching him to write and do simple arithmetic, and eventually, making him an informal foreman on the ranch.

For the next decade, he continued to work as a cowboy at several area ranches and was considered trustworthy and capable. It was during these years that Doolin worked with other cowboy and outlaw names of the day, including George “Bitter Creek” Newcomb, Charley Pierce, Bill Power, Dick Broadwell, Bill “Tulsa Jack” Blake, Dan “Dynamite Dick” Clifton, and Emmett Dalton.

By the 1890s however, Doolin had hooked up with the Dalton Gang, participating in several train and bank robberies. His first encounter with the law occurred in 1891 in Coffeyville, Kansas when he and several friends were celebrating the 4th of July by tapping a keg of beer. However, at that time, Kansas was a dry state and when lawmen attempted to confiscate their alcohol, a shootout erupted, resulting in two lawmen being wounded. Doolin and his cohorts quickly fled the area. Doolin was then a wanted man and began his outlaw career earnest.

On October 5, 1892, the Dalton Gang made its fateful attempt to rob two banks in Coffeyville, Kansas. In the end, it was a total failure with Bob and Grat Dalton, Bill Power and Dick Broadwell being killed. Only Emmett Dalton survived to spend years in prison for the attempt. On the face of it, Doolin didn’t participate in this robbery, which spared his life, at least for a little while. However, since that fateful day, some historians have alleged that there was a sixth gang member in an alley holding the horses, who escaped. Though who that sixth man was remains a mystery, many speculate that it very well might have been Bill Doolin.

Soon afterward, Doolin founded another gang, the Oklahombres, who were also called the Wild Bunch and the Oklahoma Long Riders because of the long dusters that they wore.

Wasting no time, Doolin and his new gang robbed the Ford County Bank at Spearville, Kansas on November 1, 1892, getting away with cash and over $1,500 in treasury notes. Within no time, a notice was circulated of the robbers’ descriptions. The city marshal in Stillwater, Oklahoma recognized the description of Oliver “Ol” Yantis and a posse was sent looking for him. He would be the first of the gang to die when he was killed in a shootout on November 29, 1892, at Orlando, Oklahoma Territory.

On March 14, 1893, Doolin married Edith Ellsworth of Ingalls, Oklahoma in Kingfisher. Whether she knew that Bill was an outlaw is unknown, but she stood by him and the couple would have a son they named Jay.

On June 11, 1893, the gang was back on the trail again, robbing a train near Cimarron, Kansas. Making off with about $1,000 in silver, a posse was in quick pursuit, tracking them to a point north of Fort Supply, Oklahoma. When the guns began to blaze, Doolin was shot and wounded in the left foot. Though he was able to escape and recovered, he would walk with a limp for the rest of his life.

In August 1893, several members of the outlaw gang, including Bill Doolin, Bill Dalton, George “Red Buck” Weightman, George “Bitter Creek” Newcomb, Charlie Pierce, “Arkansas Tom” Jones, “Tulsa Jack” Blake, and “Dynamite Dick” Clifton, were taking refuge in the small town of Ingalls, Oklahoma. Most of them had been in town for weeks living at the city hotel and spending their time at the Ransom Saloon.

When U.S. Marshals got word of their location, Marshal Evett Dumas “E.D.” Nix formed a posse of some 27 deputy marshals and Indian Police and headed towards Ingalls. Camping out along a creek the night before, they were seen by a young boy, who the deputies held overnight. However, the boy slipped away early the next morning and ran into Ingalls, telling the outlaws, “The marshals are coming.”

On September 1st, the posse entered the outlaw town of Ingalls with the intent to capture the gang. In what would be remembered as the Battle of Ingalls, three of the fourteen lawmen carrying Deputy U.S. Marshals’ commissions would die as a result of the battle. Two town citizens would also die; one killed while protecting the outlaws. Of the Doolin Gang, Newcomb was seriously wounded but escaped, and Arkansas Tom Jones, the killer of the three deputies and one citizen, was captured. He would be sent to prison, paroled in 1910, but after robbing another bank, he was killed on August 16, 1924, in Joplin, Missouri by police officers.

After the shootout, the gang laid low for a while but were back at it early the next year. On January 3, 1894, Charlie Pierce and George “Red Buck” Weightman held up the store and post office at Clarkson, Oklahoma. Just a few weeks later, on January 23rd, the gang robbed the Farmers Citizens Bank at Pawnee, Oklahoma, and March 10th the Oklahombres robbed the Santa Fe Railroad station at Woodward, Oklahoma of over $6,000.

“I have selected you to do this work, placing explicit confidence in your abilities to cope with those desperadoes and bring them in — live if possible — dead if necessary.”

On April 1st gang members Bill Dalton and Bitter Creek Newcomb attempted to rob the store of retired US Deputy Marshal W.H. Carr at Sacred Heart, Oklahoma. The old lawman instantly recognized Bill Dalton and reached for his gun, at which point Newcomb drew his pistol and shot Carr in the wrist. However, the retired lawman wounded Newcomb in the shoulder. Dalton then shot Carr in the abdomen, but though wounded, Carr continued to shoot, chasing the fugitives outside, where they jumped on their horses and fled.

The heists continued with a bank robbery at Southwest City, Missouri on May 10, 1894, that netted $4,000 and left one townsperson dead and several wounded.

In the meantime, Bill Dalton left the Doolin Gang to form his own gang, who robbed the First National Bank at Longview, Texas on May 23, 1894. It would be his only robbery with his “new” gang. Just a few weeks later, on June 8, 1894, a posse of lawmen approached Bill’s home near Ardmore, Oklahoma. Bill, with a pistol in hand, jumped out of a window and ran toward the posse, ignoring orders to halt. He was killed immediately.

On December 19, 1894, Doolin was reportedly one of six men who attempted to rob the J.R. Pearce store at Texana, Oklahoma. However, they were driven off with less than $20.00 in merchandise.

On April 3, 1895, the Oklahombres without Bill Doolin, held up a Rock Island train at Dover, Oklahoma. However, they were unable to open the safe containing some $50,000 destined for the army payroll. Instead, they robbed the passengers of cash and jewelry. In hot pursuit were U.S. Deputy Marshal Chris Madsen and a posse who picked up their trail at daybreak. At about noon, “Tulsa Jack” Blake was standing on lookout, when the posse came upon him. Blake was shot dead and the gang scattered.

Charlie Pierce and George “Bitter Creek” Newcomb killed on May 1, 1895

On May 1, 1895, gang members Charlie Pierce and George “Bitter Creek” Newcomb were shot and killed by the bounty hunters known as “The Dunn Brothers”. The bounty hunter team that killed Pierce and Newcomb were the older brothers of George Newcomb’s teenage girlfriend, Rose Dunn. It was alleged that she had betrayed Newcomb, but it is more likely that her brothers simply trailed her to the outlaws’ hideout.

With the Three Guardsmen in hot pursuit and gang members being killed one by one, Bill Doolin and “Little Dick” West fled to New Mexico in the summer of 1895. Knowing that his freedom was limited, Doolin made several offers to surrender in exchange for a light sentence, but his offers were rejected. Later that year, Doolin and his wife were hiding out near Burden, Kansas. In the meantime, Little Bill Raidler was captured on September 6, 1895, by Deputy U.S. Marshal Bill Tilghman. He would be sent to prison and paroled in 1903 because of complications from wounds received when he was captured. He died the following year.

From Kansas, Bill Doolin and his wife went to Eureka Springs, Arkansas so that Doolin could take in the medicinal waters. Evidently, his foot, which had taken a bullet some years previous, had developed rheumatism. But the tenacious Bill Tilghman tracked him to the resort and in January 1896, the famous lawman single-handedly captured the outlaw at the resort. Offering no resistance, Doolin was taken back to Oklahoma and jailed at Guthrie while awaiting trial.

While Doolin was in jail another gang member was killed — Red Buck Weightman on March 4, 1896, near Arapaho, Oklahoma Territory by a Custer County Posse.

But Bill Doolin had a plan. On July 5, 1896, he, along with “Dynamite Dick” Clifton, and 12 others escaped the Guthrie jail and fled. Doolin took refuge with his wife in Lawson, Oklahoma and the other escapees scattered. His freedom would be brief. On August 24, 1896, Doolin was tracked down and when he refused to surrender was shot and killed by a shotgun blast by Deputy U.S. Marshal Heck Thomas. 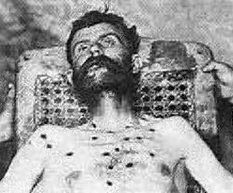 Doolin’s body was put on display in Guthrie, Oklahoma. A local photographer made two pictures of the dead outlaw. Mrs. Doolin and her brothers composed a poem about the outlaw which they had printed on postcards and sold it with the pictures to all who would buy them at twenty-five cents each. The profits were to be used for burial expenses, but, the government actually ended up paying for the embalming and burial because of the need of preserving the body for identification purposes. He was buried in the Boot Hill section of Summit View Cemetery in Guthrie, Oklahoma. Doolin’s widow filed a $50,000 damage suit against the U.S. Marshals for the unlawful death of her husband but it was dismissed in February 1897.

More than a year later, Dynamite Dick Clifton, was tracked down by Deputy U.S. Marshals and was killed near Checotah, Oklahoma on November 7, 1897.

“Little Dick” West was the last remaining fugitive gang member. He too was killed on April 8, 1898, by Deputy U.S. Marshals in Logan County,  Oklahoma Territory. 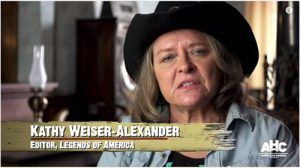