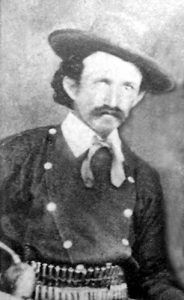 Charles “Charlie” Bowdre was a friend to Billy the Kid, who fought alongside him in the Lincoln County War. Though not known to have been involved in outlaw activities, his relationship with the gang made him suspect.

Charlie Bowdre came from a prominent family in Wilkes County, Georgia, where he was born in 1848. Raised in DeSoto County, Mississippi, he headed west and by 1874 and soon landed in New Mexico, where he was farming south of Lincoln. When the Lincoln County War erupted, he fought with the McSween faction alongside Billy the Kid and several others who would later become part of Billy the Kid’s Gang. After losing the war, both he and the Kid retreated to Fort Sumner, New Mexico, where Bowdre went to work as a cowboy.

Though he was not overly involved with Billy’s cattle rustling activities, he remained friends with several of the gang members and, by association, was a suspect in their outlaw endeavors. In December 1880, he was riding into Fort Sumner with Billy and his gang when Pat Garrett shot and killed gang member Thomas O’Folliard. The others escaped, but several days later, on December 23, 1880, Garrett, along with a 20-man posse, tracked them down to an abandoned farmhouse near Stinking Springs, New Mexico. Inside were Billy the Kid, Charlie Bowdre, Dave Rudabaugh, Tom Pickett, and Billy Wilson.

When Garrett called for the men’s surrender, Billy responded by firing several shots. The posse returned the gunfire, and as Bowdre was passing by a window, he was hit in the chest and  screamed, “I’m killed, Billy, they killed me.” Billy responded by pushing him out the door, telling him to get revenge before he died. But, Charlie didn’t have the strength to fire and was soon hit several more times. His body lay there for two more days as the posse kept up the siege until the outlaws, out of food and water, finally surrendered.

Bowdre was buried next to Thomas O’Folliard at Fort Sumner’s old military cemetery. Billy the Kid’s body would soon join with those of his old friends.