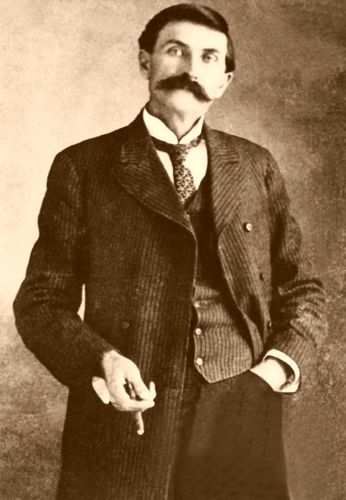 Pat Garrett was a cowboy, rancher, and lawman best known for killing Billy the Kid.

A tall, thin, angular man with prominent cheekbones, Garrett left Louisiana for Dallas County, Texas, at the age of 19. He worked on the large LS Ranch in west Texas as a cowboy and cattle gunman when rustling was rampant in the area.

From there, he joined up with W. Skelton Glenn as a buffalo hunter. However, he soon disagreed with a fellow hunter over some hides. The altercation led to gunplay, and when the other man drew on Garrett, Pat shot him dead.

By 1878, he had moved on to Fort Sumner, New Mexico, just as the Lincoln County War was drawing to an end. The battle between rival gangs spawned a storm of lawlessness and violence that would continue in southeastern New Mexico for the next two decades. 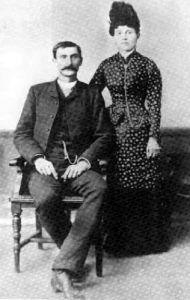 Pat Garrett, with his wife Apolonaria

Garrett first went to work on Peter Maxwell’s ranch. A year later, he quit and worked as a bartender at Beaver Smith’s saloon. Soon after, he married a woman named Juanita Martinez, but she died before the end of the year. A little more than a year later, on January 14, 1880, he married Apolinaria Gutierrez. The two would have nine children over the years.

At the saloon, Pat Garrett met and often gambled with William Bonney, better known as Billy the Kid. The two were seen together so often they soon took on the nicknames “Big Casino” and “Little Casino.”

On November 7, 1880, Garrett was appointed Lincoln County Sheriff. Friends or not, his first vow was to end the current reign of lawlessness with the primary goal of apprehending Billy the Kid.

On December 15, 1880, Governor Wallace put a $500 reward on Billy’s head, and Pat Garrett began the relentless pursuit of the outlaw. Garrett set up many traps and ambushes to apprehend Billy, but the Kid seemed to have an animal instinct that warned him of danger. However, that was not to last.

On December 19, 1880, Garrett confronted Billy and his gang when they rode into Fort Sumner, New Mexico, killing Tom O’Folliard, but the rest of the gang escaped. Soon, the determined Garrett and his posse tracked the outlaws down to Stinking Springs and surrounded the hideout. After a several-day siege, the posse killed Charlie Bowdre and captured Billy the Kid, Dirty Dave Rudabaugh, Tom Pickett, and Billy Wilson on December 23, 1880.

Billy the Kid was tried and sentenced to hang in Lincoln, New Mexico, on May 13, 1881. However, he escaped from jail on April 18, 1881, killing two guards in the process. 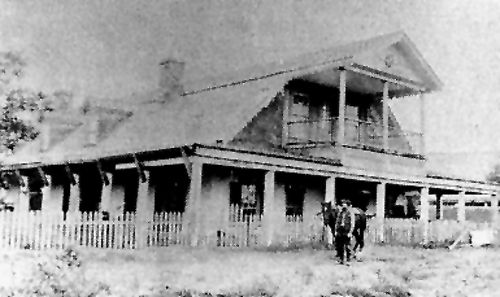 Garrett went after the Kid again and arrived at Peter Maxwell’s ranch on July 14, 1881, to question him about Billy’s whereabouts. As Maxwell and Garrett sat in Peter’s darkened bedroom in Old Fort Sumner, Billy unexpectedly entered the room. The Kid didn’t recognize Garrett in the poor lighting conditions and asked, “¿Quien es? ¿Quien es?” (Spanish for “Who is it? Who is it?), to which Garrett responded with two shots from his revolver, the first striking Billy’s heart.

Billy the Kid was buried in a plot in-between his dead friends Tom O’Folliard and Charlie Bowdre the next day at Fort Sumner’s cemetery.

Though the New Mexican newspaper said, “…Sheriff Garrett is the hero of the hour,” most people in the area saw him as a villain for having killed a favorite son. Although he had put his life on the line for his community, he lost the next election for sheriff of Lincoln County.

Garrett then turned to ranching and began to write a book about Billy the Kid. Published in 1882, The Authentic Life of Billy the Kid, the Noted Desperado of the Southwest, didn’t sell well as eight books had already beat him to the press.

In 1884, Garrett ran for New Mexico state senator, where he again lost the election. Fed up, Garrett moved his family to Tascosa, Texas, where he became captain of the LS Texas Rangers. However, this role would not last long, as Garrett quit within just a few weeks and returned to southeastern New Mexico, this time to Roswell.

In 1890 he ran for sheriff of the newly created Chaves County. However, when he lost, he bitterly left New Mexico again, living in Uvalde, Texas, where he raised and raced horses for several years.

In 1899, Garrett purchased a ranch in the San Andres Mountains of New Mexico, and in October, he was appointed sheriff of Dona Ana County. His family stayed on the ranch while Pat worked in Las Cruces, Mesilla, and Dona Ana.

On December 16, 1901, President Theodore Roosevelt, infatuated with gunfighters in the West, appointed Garrett as a United States Customs Collector at El Paso, Texas. However, it was a controversial appointment, and when his term was over in 1905, Roosevelt refused to reappoint him. Garrett and his family returned to the ranch, but Garrett was soon in the midst of financial difficulties due to back taxes and liability for a loan he had co-signed for a friend.

Becoming increasingly sad over the situation, he began to drink and gamble too much. However, still trying to make a living, he started a new horse breeding operation. To help with his financial problems, Garrett leased part of his land to a man named Wayne Brazel, who was to graze cattle upon the land. However, he soon found that Brazel had brought in several thousand goats, considered even worse than sheep as far as cattlemen were concerned.

Owing money to many people in the Roswell area, Garrett desperately approached another rancher named Carl Adamsson in January 1908 to see if he might be interested in buying his ranch. However, when he neared Adam’s home, Carl’s wife, Amanda, ordered him from the property at gunpoint. 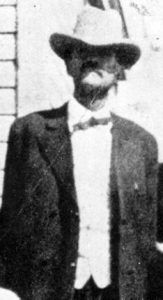 Adamson and Garrett met later and agreed on the sale. But Wayne Brazel refused to break his five-year lease unless Garrett bought his goats. Brazel and Garrett made the deal, but soon Brazel wanted even more money. Though angry, Garrett finally agreed to Brazel’s terms.

On February 29, 1908, Garrett and Adamson were in a buckboard bound for Las Cruces, where they would meet Brazel to close the deal. Brazel caught up with them on the way, and as words heated, Adamson threatened to back out of the purchase. Afterward, Brazel rode on while Garrett and Adamson continued in the buckboard.

Just miles outside of Las Cruces, they stopped the wagon, and while Adamson was relieving himself off the back of the buckboard, three shots rang out. Pat Garrett lay dead. Adamson left his body in the desert and continued to Las Cruces. Once there, Adamson swore he never saw who shot Garrett and Brazel confessed to the shooting, claiming it was self-defense.

When the body was retrieved, numerous cigarette butts were found off the trail, indicating that someone had been waiting for them. This led to the belief that the shooting was an obvious conspiracy involving two more people. Allegedly, Brazel took the “fall” for the murder because he was single. Also implicated in the killing was hired assassin Killin’ Jim Miller because Carl Adamson was married to a cousin of Jim Miller’s wife, Sallie. However, most historians deem this unlikely.

While Garrett’s remains lay in the undertaker’s parlor, dozens of gawkers came to see the man who had killed Billy the Kid. On March 5, 1908, he was buried in Las Cruces, New Mexico.

Brazel was later tried; however, he was acquitted of the crime. Controversy still exists over whether Garrett’s murder was a conspiracy to gain his land or if it was just simply a dispute with an irate Brazel.

In May 2017, Doña Ana County officials announced in a press release that a County Clerk’s office employee had found a document in a box of unarchived materials dated July 9, 1908. The handwritten Coroner’s Jury Report, signed by seven jurors, references Wayne Brazel’s involvement. According to the press release, the document says:

“We the undersigned Justices of the Peace and Coroners Jury, have attended the investigation of the body of Pat Garrett, who was reported dead within the limits of Precinct No. 20, County of Doña Ana, territory of New Mexico, on about five miles northeast of the town of Las Cruces and find that the deceased came to his death by gunshot wounds inflicted by one Wayne Brazel.”