Robert Leroy Parker, better known as Butch Cassidy was a train and bank robber who led the Wild Bunch gang of outlaws who operated throughout Utah, Nevada, Wyoming, Colorado, and New Mexico.

Robert Leroy Parker was born on April 13, 1866, in Beaver, Utah, the first of 13 children of British immigrants Maximillian Parker and Ann Campbell Gillies. The Parker and Gillies families had converted to the Mormon faith while still living in England and Ireland before immigrating to America.

In 1879, the Parker family moved to a piece of property near Circleville, Utah, where they farmed and raised cattle. Robert left home during his early teens and went to work on a dairy farm where he formed a close relationship with a cowboy and known cattle rustler who called himself Mike Cassidy (an alias for John Tolliver “J. T.” McClammy). Later, Parker worked on several ranches as well as being briefly employed by a butcher in Rock Springs, Wyoming, where he acquired the nickname “Butch.” Later, he borrowed his friend’s last name and began to go by the name of Butch Cassidy. 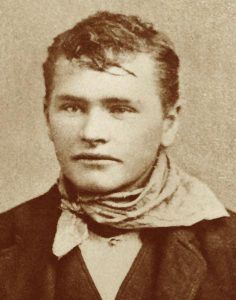 Butch continued to work on area ranches until he turned 18 in 1884. He then moved to Telluride, Colorado, telling his family that he was going to seek work in the town’s silver mines. However, he didn’t mention that he would be driving a herd of stolen horses down to Colorado. There, he took a few honest jobs while continuing to rustle horses. He also met a man named Matt Warner, the owner of a racehorse, and Cassidy was soon immersed in the horse race scene.

Cassidy’s first bank robbery took place on June 24, 1889, when he, Matt Warner and the McCarty brothers — Tom and Bill, robbed the San Miguel Valley Bank in Telluride, Colorado stealing approximately $21,000. Fleeing into the rough country, they lost their trackers in a wilderness of canyons, hidden valleys and high peaks known as Robber’s Roost.

In 1890, with his share of the loot stolen in Colorado, Cassidy purchased a ranch on the outskirts of Dubois, Wyoming where he was known to have rustled cattle and horses. This location is across the state from the notorious Hole-in-the-Wall, a natural geological formation and a popular hideout for outlaw gangs including Cassidy’s, so some historians surmise that the ranch was never economically successful, but rather, was a facade for clandestine activities. 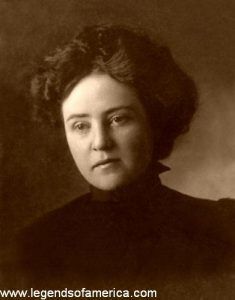 In early 1894, Cassidy became involved romantically with outlaw and rancher Ann Bassett. Bassett’s father, rancher Herb Bassett, did business with Cassidy, supplying him with fresh horses and beef. That same year, Cassidy was arrested at Lander, Wyoming, for stealing horses. He was sentenced to two years in the Wyoming State Prison in Laramie, but was released after 18 months.

Upon his full release in 1896, Cassidy resumed his life as a criminal. With several other well-known outlaws, including his best friend, William Ellsworth “Elzy” Lay, Harry “Sundance Kid” Longabaugh, Ben “Tall Texan” Kilpatrick, and Harvey “Kid Curry” Logan, they formed nucleus of the group known as the “Wild Bunch”, Cassidy embarked on what is considered the longest stretch of successful train and bank robberies in American history. Others in the group included Harry Tracy, William “News” Carver, Laura Bullion, and George “Flat Nose” Curry. The group took its name from the Doolin–Dalton gang, who were also known as the “Wild Bunch”.

Their first robbery occurred on August 13, 1896, when Cassidy, Lay, Logan and a man named Bob Meeks robbed the bank at Montpelier, Idaho, escaping with approximately $7,000.  It would be followed by numerous robberies in South Dakota, New Mexico, Nevada Utah, Wyoming and Montana. Between their robberies, the men hid out at the Hole-in-the-Wall Pass, located in Johnson County, Wyoming, where a number of outlaw gangs had their hideouts. It was shortly after this robbery that Cassidy recruited the Sundance Kid into the Wild Bunch.

In early 1897, Cassidy was joined at Robbers Roost by Ann Bassett and Elzy Lay’s girlfriend Maude Davis. The four hid there until early April when Lay and Cassidy sent the women home so that the men could plan their next robbery. On April 22, 1897, the pair ambushed a small group of men carrying the payroll of the Pleasant Valley Coal Company in Castle Gate, Utah. Making off with some $7,000 in gold, before fleeing back to Robbers Roost. The outlaw loot was never recovered and many believe it was hidden by the gang somewhere near Robbers Roost located along the Outlaw Trail, in southeastern Utah. (See story HERE)

On June 28, 1897, six bandits, including Kid Curry, George “Flat Nose” Curry, Sundance Kid, Tom “Peep” O’Day, Harvey Logan, and Walt Punteney, robbed the bank at Belle Fourche, South Dakota. This robbery was obviously not well-planned, as the gang got away with only $97 and Tom O’Day was caught hiding in a saloon privy. He was later tried but acquitted. Walt Punteney was also captured but the charges were dropped.

On June 2, 1899, the gang, including Butch Cassidy, Sundance Kid, Harvey Logan, and Elzy Lay, robbed a Union Pacific Overland Flyer passenger train near Wilcox, Wyoming. They wore masks made from white napkins, possibly pilfered from a Harvey House restaurant. This holdup, which yielded between $30,000 and $50,000, made the gang nationally famous and resulted in a massive manhunt. The New York Herald stated: “They were lawless men who have lived long in the crags and become like eagles.”

Witnesses reported six masked men. The two additional men may have been George Currie, Lonnie Logan or Bob Lee. The gang split up afterward, a common ploy to throw off pursuers, and several fled to New Mexico.

Many notable lawmen of the day took part in the hunt for the outlaws, but they were not found. During a shootout with lawmen following the train robbery, both Kid Curry and George Curry shot and killed Sheriff Joe Hazen. Tom Horn, a killer-for-hire employed by the Pinkerton Agency, obtained information about the Hazen shooting and then passed this information to Pinkerton detective Charlie Siringo, who was assigned the task of capturing the outlaws. Siringo became friends with Elfie Landusky, who was using the last name Curry after allegedly becoming pregnant by Kid Curry’s brother, Lonny. Through her, Siringo intended to locate the gang.