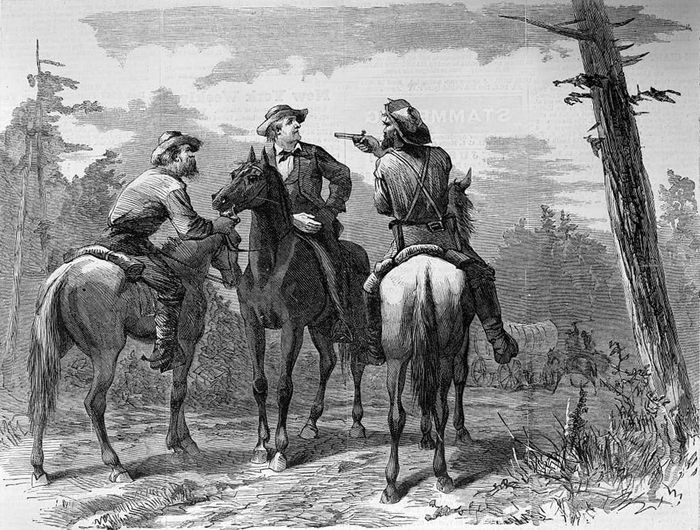 Cullen Montgomery Baker was a mean, cold-blooded, and ruthless killer who left a long trail of bodies across the American Frontier. A Confederate guerrilla during the Civil War, he didn’t want to give up the fight once the war was over, and afterward ambushed reconstructionists, killed former slaves, and generally terrorized the states of Texas and Arkansas for four years.

Baker was born in Weakley County, Tennessee on June 22, 1835, to John Baker and his wife Elizabeth. His father was an honest but poor farmer who also owned cattle. Soon after he was born, the family moved to Clarksville, Arkansas. After just a few years, the family moved again to Texas in 1839 where they eventually settled in Davis County. There, his father received a land grant of 640 acres. Though they had received the acreage, the family was still poor and because of his homespun trousers and bare feet, Cullen was teased by students at school. Though he was a slender and withdrawn youth, he began to fight back. He also obtained an old pistol and rusty, but workable, rifle and began to practice with both weapons until he was very proficient. 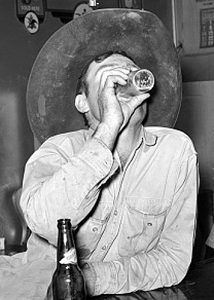 He took his first drink of whiskey when he was just 15-years-old and began to challenge both boys and men who annoyed him, to “go for your guns.” It wasn’t long before he was spending much of his time in saloons, where his quick temper got him into a number of brawls. He was generally described as a hard drinker, a braggart, quarrelsome, and mean-spirited. During one fight, he was knocked unconscious by a man named Morgan Culp, who hit him in the head with a tomahawk. This incident seemingly calmed his temper for a little while, but it wouldn’t last.

Some weeks later, on January 11, 1854, still wearing a head bandage, Baker married 17-year-old Martha Jane Petty and settled down to a quiet life of farming. But he tired of this routine and just eight months later he was back to his old ways. One night when he was out drinking, he became involved in a verbal altercation with a youth named Stallcup. As the discussion devolved, Baker became enraged, grabbed a whip, and beat the boy to near death. Baker was then charged with the crime and he confronted one of the witnesses, Wesley Bailey, at his home, shot him in both legs with a shotgun, and left him lying in front of his house. Bailey died a few days later. Before Baker could be arrested for the murder, he fled to Perry County, Arkansas, where he stayed with his mother’s brother, Thomas Young for almost two years.

While he was there he stabbed a man named Wartham to death in an argument about horses in 1856 and afterward fled back to Texas. But he soon returned to Arkansas when he learned he was still wanted to face murder charges in the killing of Bailey. While he was gone, his wife Martha gave birth to a baby girl, Louisa Jane on May 24, 1857. The next year, he briefly returned to Texas to retrieve his wife and daughter. His wife died on July 2, 1860, and Baker took their child to Sulphur County, Texas and left her there with his in-laws. He never saw his daughter again. 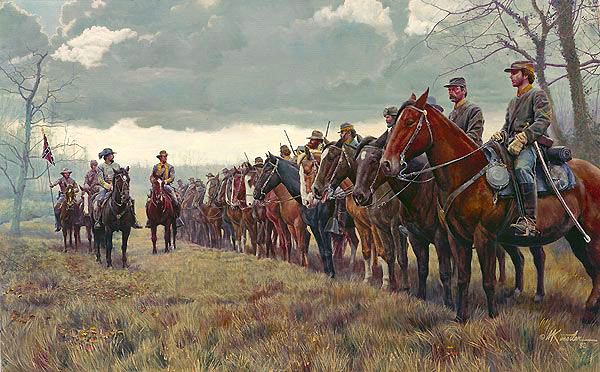 In November 1861 he joined Company G of Morgan’s Regimental Cavalry to fight in the Confederate Army. In July 1862, he married for a second time to Martha Foster, who was unaware that he was wanted for murder. His name is on the muster roll for September-October 1862, and he received pay through August 31, but he is designated a deserter on January 10, 1863.

He then joined a group of guerillas called the “Independent Rangers” who were loosely associated with the Confederate Home Guard. Their objective was to pursue and capture deserters from the Confederate Army, but instead, they took advantage of most of the men being away at war and committed atrocities of intimidation, rape, theft, and violence. Any man who had property was considered an enemy and was declared to be a Union man. The depredations in some areas became so bad that everyone who could, left the area. 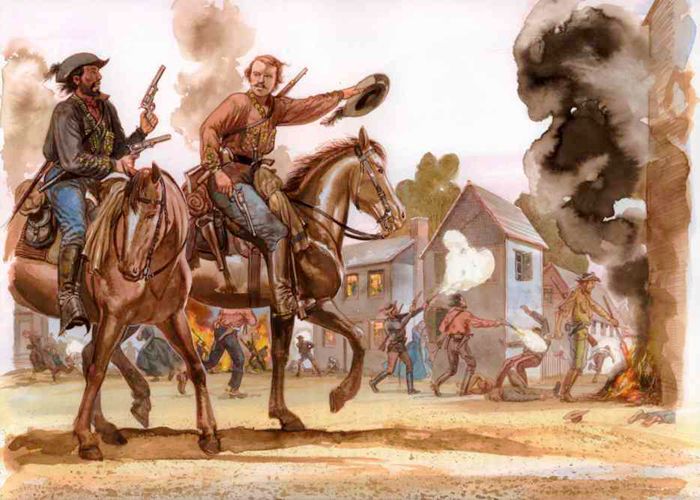 Shortly after Baker joined the “Independent Rangers” they began an ongoing feud with another band called the “Mountain Boomers”, who were Union guerrillas. Both bands ranged through Arkansas robbing, burning and murdering indiscriminately.

In November 1864, a small band of mostly old men, women, and children wished to flee from the turmoil and started west with their teams and valuables. However, as they were crossing the Saline River in the Ouachita Mountains, they were overtaken by Cullen Baker and the Independent Rangers. Allegedly, Baker and his men considered their attempt to flee as “unpatriotic,” but, in reality, they needed little reason to harass them. When the settler band refused to return, Baker drew his pistol and shot and killed the band’s leader. He then assured the rest of the group that he would not kill anyone else if they would agree to return to their homes. But, after the remaining settlers came back to Baker’s side of the river, he quickly led his “Rangers” in shooting and killing nine other men and stole any valuables. The event became known locally as the Massacre of Saline.

Afterward, the local citizens had had enough and began active preparations to annihilate the murderous gang. However, when the ruffians got word of this, they fled with their booty and the many horses and mules they had stolen.

At the end of 1864, Baker was in a saloon wearing a Confederate hat in Spanish Bluffs, Arkansas when he was approached by four African American Union soldiers who asked for identification. Baker turned to face them with his pistol drawn, shooting and killing a sergeant and the three other soldiers.

When the war was over, one report tells that as he was making his way home, he came upon a group of travels in Sevier County, Tennessee. In the group was a black woman who he began to verbally harass and then shot and killed her.

He then settled down with his wife Martha near the Sulphur River area in southwestern Arkansas where he became the manager of the Line Ferry. But, it would be short-lived. Martha soon took ill and died on March 1, 1866. By many accounts, Baker was said to have deeply grieved her loss. But that didn’t stop him from proposing to her 16-year-old sister, Belle Foster, just two months later. Belle rejected his proposal and instead married a schoolteacher and political activist named Thomas Orr. Baker then began to harass Orr, trying to pick fights with the man, hitting him over the head with a tree limb, and going to his school to ridicule, curse, and threaten the man in front of his students. 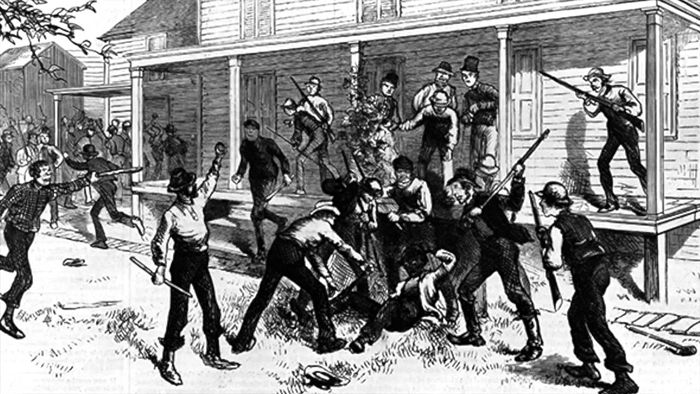 By this time, Reconstruction had begun in Arkansas and Texas, and Baker despised the idea. He and another outlaw named Lee Rames organized a gang that operated out of the Sulphur River bottoms near Bright Star, Arkansas. Committing acts of robbery and murder, the gang was said to have killed at least 30 people, many of whom were outnumbered, ambushed, or shot in the back.

Baker and his gang also traveled to Texas, where he killed John Salmons, who had previously killed a gang member, Seth Rames, the brother of gang member Lee Rames. He also killed W.G. Kirkman, a Reconstruction official, and a man named George W. Barron, who had previously taken part as a member of a posse hunting him. The gang continued their outlaw spree the areas of Queen City, Texas, and Texarkana, Arkansas. 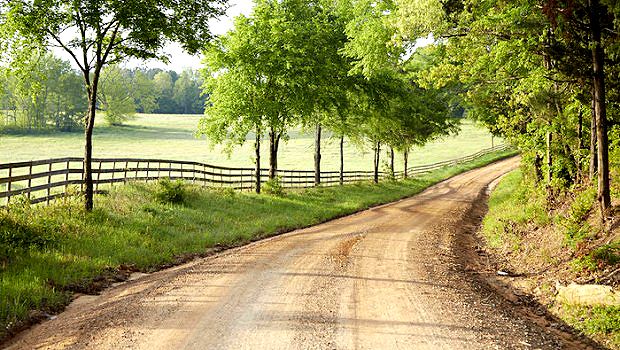 On June 1, 1867, he returned to Cass County, where he entered the Rowden General Store, picked up some items and left without paying. The proprietor, John Rowden then rode with a shotgun to Baker’s house and demanded payment. Baker said he would come back and pay him, but on June 5th, he killed Rowden instead.

Baker then fled back into Arkansas, where he was confronted by a Union sergeant when he boarded a ferry, who recognized him. He killed the Union officer, but a private was able to get away and reported the murder. After this, Baker was pursued relentlessly by Union forces.

On July 25, 1867, he got into an argument with several Union Soldiers near New Boston, Texas which quickly escalated to violence. In the ensuing gunfight, Baker was shot in the arm, but he killed army Private Albert E. Titus. This resulted in a $1,000 reward for his capture, dead or alive.

In December 1867, he then made his way to Bright Star, Arkansas where he met up with several men who were planning a raid on the farm of Howell Smith, who had recently hired several freed slaves. In the attack, one of Smith’s daughters was stabbed, another clubbed, and a black man was shot and killed. But, Smith resisted and a shootout ensued which resulted in several of the raiders being wounded, including Baker, who was shot in the leg.

On October 24, 1868, Baker and his gang were reported to have been involved in the killings of Major P.J. Andrews, Lieutenant H.F. Willis, and an unnamed black man in Little Rock Arkansas. In the attack, Sheriff Standel was wounded. 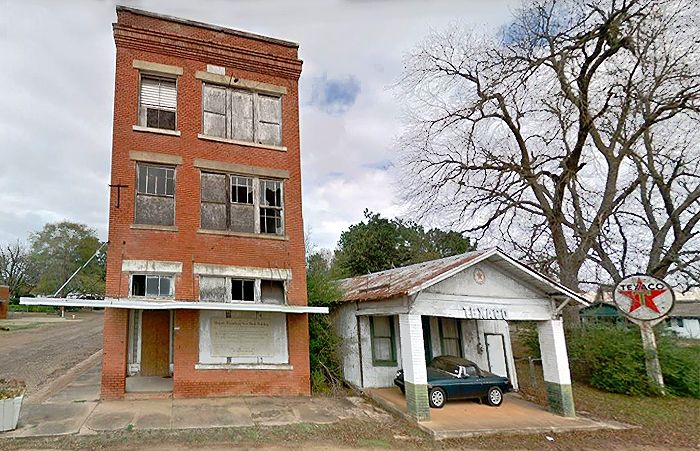 By this time, Baker’s co-leader of the gang, Lee Rames, had begun to doubt Baker’s leadership and felt that his actions would lead to the downfall of the entire gang. Rames then defied Baker, who backed down and the gang broke up in December 1868. All of the members, except “Dummy” Kirby sided with Rames. He and Kirby made their way to Bloomburg, Texas to the house of Baker’s in-laws in January 1869. It would be there that Cullen Baker and “Dummy” Kirby would die on January 6, 1869.

Exactly how they were killed is unknown. One version says that his father-in-law and friends laced a bottle of whiskey and some food with strychnine and both men died from poisoning. Afterward, their bodies were riddled with bullets. Another version says that Thomas Orr, with whom Baker had long feuded with, led a small band of men who ambushed Baker and Kirby at the Foster home, shooting and killing them. 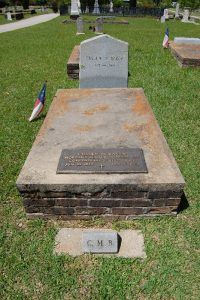 After the men were killed, their bodies were dragged through the town of Bloomburg and then taken to the US Army outpost near Jefferson, where they were placed on public display. Thomas Orr was said to have collected some of the reward money offered for Baker.

Baker was buried in the Oakwood Cemetery in Jefferson, Texas. Though he was a deserter from Morgan’s Squadron, the Confederate cavalry unit is shown on his grave marker.

Afterward, he was romanticized by some for his defense of the “Southern honor.” But his record shows he was a merciless killer who killed anyone who angered him, regardless of their loyalties. He is estimated with killing between 50-60 people and authorities and historians alike rank him among the most ruthless killers who ever lived.