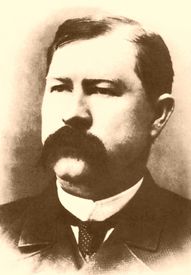 “Virgil Earp was known as one of the most daring and adventurous of Western pioneers, and he was known from North to South on the Pacific Coast as one of the great-hearted men who helped to build the West.”

Though living a life of as much adventure as his younger brother, Wyatt, Virgil Earp never obtained the same fame, perhaps due to Wyatt’s better skills at self-publicity.

Virgil Walter Earp was born on July 18, 1843, in Hartford, Kentucky, the second son of Nicholas Earp and Virginia Ann Cooksey. By the time Virgil was 17 years old, his family was living in Pella, Iowa, where he eloped with a Dutch immigrant named Magdalena C. “Ellen” Rysdam on September 21, 1861. Though her parents severely disapproved of her choice of a husband, the pair remained together. When the Civil War broke out, 18-year-old Virgil enlisted in the Union Army, eventually serving with the 83rd Illinois Infantry from July 26, 1862-June 24, 1865.

Virgil and Ellen had a baby girl on January 7, 1862, naming her Nellie Jane Earp. It was the only known child that Virgil would have in his lifetime. He went off to war when she was only two weeks old.

While Virgil was off fighting the war, Ellen received word in the summer of 1863 that Virgil had been killed. Soon after, she remarried a man named John Van Rossem, and the couple, along with Virgil’s daughter, Nellie, moved to Oregon Territory.

When Virgil was discharged from the army on June 26, 1865, he arrived back in Pella to find his wife and daughter gone. In the meantime, the rest of his family had moved westward to San Bernardino, California. A year later, he joined them in California. Though he had probably learned where Ellen and his daughter had gone, he did not go looking for them.

In 1866, Virgil worked with his younger brother Wyatt as a freighter-teamster between Wilmington and Prescott, Arizona. Later, the pair also worked on railroad construction in Wyoming.

In 1868, the Earps returned to the Midwest, settling in Lamar, Missouri, where Virgil helped his father Nicholas farm and operate a grocery store. While there, Virgil took a second wife named Rosella Dragoo on August 28, 1870. But Virgil had no luck in the love department, as the marriage lasted just three years.

Shortly afterward, Virgil left Lamar, settling in Council Bluffs, Iowa, for a short time. There he met a waitress named Alvira “Allie” Sullivan. Though some say they married in 1874 in Los Angeles, California, others surmise that they never made it official. In any case, Virgil would spend the rest of his life with her.

Over the years, Virgil would most often work as a lawman but also held several other jobs, including farming, prospecting, driving a stagecoach, rail construction, and working at a sawmill.

In 1877, Virgil was in Dodge City, Kansas, along with his brother, Wyatt. However, no records indicate that he ever worked as a lawman there. From Dodge City, he and his wife moved to Prescott, Arizona, where he worked in a sawmill. However, in October 1877, he was deputized by Yavapai County Sheriff Ed Bowers during a gunfight in the street. Fighting robbers trying to make off with their loot, Virgil shot one of them twice through the head with a Winchester Rifle. The next year, he served as a night watchman in Prescott for a couple of months before becoming a constable.

On November 27, 1879, Virgil was appointed as a U.S. Deputy Marshal for Arizona Territory and traveled from Prescott to Tombstone, along with brother Wyatt. Less than a year later, on October 30, 1880, Virgil became the acting town marshal after Fred White was shot and killed by the outlaw and gunman Curly Bill Brocius.

He continued to hold his federal law enforcement position and the marshal’s appointment. However, it wouldn’t be for long, as elections were held just two weeks later for the “open” marshal slot. Virgil was narrowly defeated by Ben Sippy.

The next year, on June 6, 1881, Virgil would be appointed as acting city marshal again when Ben Sippy requested a temporary leave of absence. During his appointment, Tombstone was devastated by a fire on June 22nd, and Virgil was left to help manage the issues. Less than a week later, the City of Tombstone discovered $3,000 in financial improprieties in the marshal’s office. Ben Sippy, who had known financial problems, was then permanently replaced by Virgil on the appointment of Tombstone Mayor John Clum.

A re-creation of the Gunfight at the O.K. Corral

Later that year, on October 26th, Tombstone and the Earps would become famous for the well-publicized Gunfight at the O.K. Corral. When Virgil, temporarily deputizing brothers Wyatt and Morgan, and Doc Holliday went to disarm the McLaurys and Billy Clanton, all hell broke loose, resulting in the most famous gunfight of the Old West. The affair made Wyatt a legend, but it was actually Virgil who was the most experienced. Up to that point, Wyatt had only been in one gunfight, Morgan in none, while Virgil had years of lawman experience, plus that of the Civil War. When the smoke cleared, Frank and Tom McLaury, along with Billy Clanton, were dead. Virgil Earp took a shot to the leg, and Morgan suffered a shoulder wound.

Sheriff John Behan arrested Virgil Earp, Wyatt Earp, Morgan Earp, and Doc Holliday for the murder of Billy Clanton, Tom McLaury, and Frank McLaury. Three days later, the city council suspended Virgil pending the outcome of the shooting investigation. After a trial, all of the members of the Earp faction were found to have acted within the law.

Over the next few months, the Earps struggled to retain control over Tombstone as word spread that the Cowboy faction would take revenge on the Earps for the killings. For safety, Virgil moved to the Cosmopolitan Hotel. A couple of months later, on December 28th, when Virgil was walking from the Oriental Saloon to the hotel, he was ambushed. Shots were fired from the second-story building across Allen Street, hitting the Crystal Palace Saloon and the Eagle Brewery, breaking windows, and narrowly missing customers. Virgil was hit in the back and left arm by buckshot. Though his arm would be permanently crippled, he would survive. The shooters were never positively identified. Though Ike Clanton’s hat was found at the shooting site, one of his friends gave him an alibi, and no arrests were made.

On March 18, 1882, the cowboy gang struck again while Morgan Earp was playing pool at Campbell and Hatch’s Saloon. A shot was fired from the darkness of the alley, striking Morgan in the back. Morgan’s body was dressed in one of Doc Holliday’s suits and shipped to the parents in Colton, California, for burial. The entire Earp party accompanied Morgan’s body, including Virgil and his wife, Allie. Also accompanying them out of town were several “bodyguards,” including Sherman McMasters and “Turkey Creek” Jack Johnson.

However, in Tucson, Wyatt, Warren, and Doc Holliday hopped off the train in search of Frank Stillwell, who supposedly worked in the railroad yards. The train went on to California without them. Wyatt and Warren Earp, Doc Holliday, Sherman McMasters, and “Turkey Creek” Jack Johnson saw the train safely off.

When they spied Frank Stillwell, a member of the Cowboy faction, near the train tracks, Wyatt shot him. He and the others then began what is known as the Earp Vendetta Ride, chasing down those they felt were responsible for Morgan’s death, killing them one by one or running them out of the territory. Though the five men were indicted for the killing of Stillwell, none were brought to trial, all having fled the territory after their vengeance ride.

After settling in Colton, California, and recovering from his injuries, Virgil worked as a railroad agent for a couple of years and was also said to have gambled heavily. In 1886, he opened a detective agency for a brief time before becoming a constable in July 1886. A year later, when Colton was officially incorporated, Virgil became the city’s first elected marshal on July 11, 1887.

In March 1889, he resigned as city marshal and became a boxing matchmaker and gambling hall operator in San Bernardino, California. By the spring of 1893, the restless Virgil had moved on again, establishing an Earp’s Hall in the mining camp of Vanderbilt, California. The two-story saloon provided dances, prizefights, and church services in its upstairs hall, while downstairs held the typical saloon fare. Even though he was well-liked in the town, he lost a constable election in 1894. 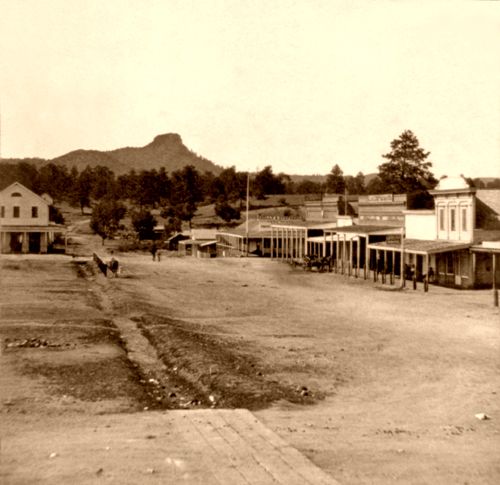 Virgil and Allie briefly returned to Colton in early 1895 but were soon headed to another booming mining town — Cripple Creek, Colorado. Virgil didn’t stay long, soon moving back to Prescott, Arizona, and working in the mines. In the fall of 1896, he was injured in a mining accident and took up ranching south of Prescott.

In the fall of 1898, Virgil Earp received a letter from Mrs. Levi Law of Portland, Oregon, in which she asked if he was the same Virgil Earp who had married Ellen Rysdam in Pella, Iowa, in 1861. Obviously, he was, and the two soon began a correspondence. In April 1899, Virgil and Allie traveled to Portland to see her for the first time in 37 years and his two grandchildren. They maintained a relationship for the rest of his days.

In 1900, he ran for Yavapai County, Arizona Sheriff, but his health was suffering, and he was forced to drop out of the race.

By 1904, Virgil was back in Colton, California. By that time, the city had an anti-saloon sentiment and a liquor ordinance that limited the number of saloons When Virgil was unable to get a license, he and Allie struck out for yet another mining camp – Goldfield, Nevada.

There, he became a Deputy Sheriff on January 26, 1905. However, his health continued to fail him, and on October 19, 1905, he died in Goldfield of Pneumonia.

His daughter Nellie arranged for her father’s body to be transported to Portland, Oregon, where she lived, and he was buried at Riverview Cemetery.

Allie returned to California, where she spent the rest of her life, dying at the age of 98.