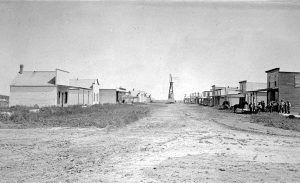 Charles Edwin “Ed” Short was born on October 27, 1864, in New Marion, Indiana.  Short headed west when he was about 17 years old, first settling in Emporia, Kansas. He then got a job as a cowboy near Hunnewell, a small town on the border of Kansas and Oklahoma. However, he was later in Stevens County, Kansas serving as the Woodsdale Marshal in 1888, at the time the area was embroiled in the vicious Stevens County Seat War. When the faction that Short supported failed to win, he next headed to Oklahoma, where he settled at Hennessey.

He then became a U.S. Deputy Marshal. In August 1891, Marshal Short heard that Charles Bryant, a member of the Dalton Gang was sick and recuperating at a Hennessey Hotel. Wasting no time he arrested Bryant and on August 3, 1891, and he and the outlaw boarded a train so that Short could deliver Bryant to the federal district court in Wichita, Kansas. When Short had to relieve himself, he made the mistake of leaving Bryant under the guard of the express car messenger. The messenger, seeing that Bryant was asleep, laid down the gun and went about his work. When Short returned, Charlie, who had only been pretending to be asleep, grabbed the revolver and shot Short in the chest as he reentered the car. The lawman immediately returned fire with his rifle, blowing Bryant’s chest away and severing his spinal column. By the time the train reached Waukomis, Oklahoma both men were dead.