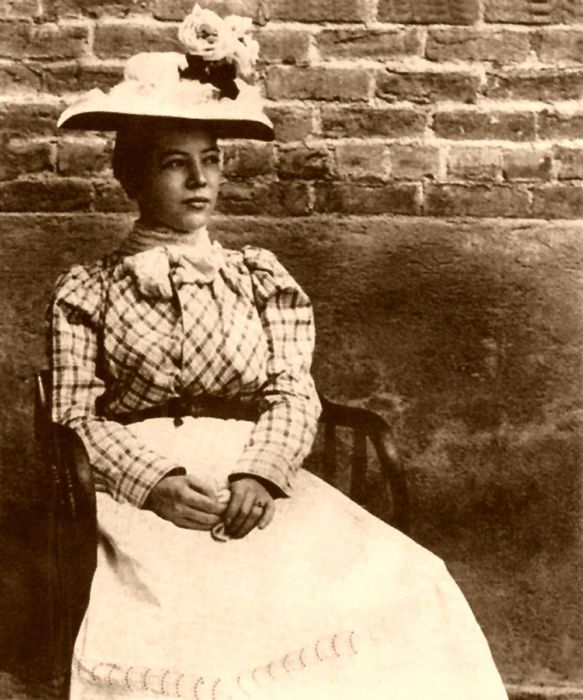 Pearl Hart, a petite and attractive young girl, would become one of the only female stagecoach robbers in the American West, and a celebrity in her own right.

Born as Pearl Taylor of French descent in Lindsay, Ontario, Canada, she was one of several children brought up in a respectable middle-class family and received a good education. Though she couldn’t have known it, her life would take a turn for the worse when, at the age of seventeen, she fell for swaggering and seductive gambler named Frederick Hart.

Pearl soon eloped with Hart, who sometimes worked as a bartender, but more often, lost whatever money he had at the gaming tables. In addition to being a poor provider, he was also said to have been a heavy drinker and often abusive to his young wife. Whatever dreams Pearl might have had with Fred, she was soon disappointed, as her life with him proved to be one hardship after another.

In 1893, the couple traveled to the Columbian Exposition in Chicago, Illinois where Fred worked as a sideshow barker and Pearl found a number of odd jobs. 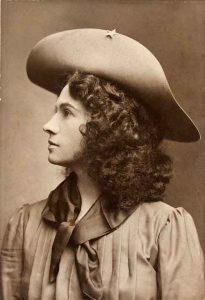 While she was there, she became enthralled with the Wild West shows and was especially enamored by Annie Oakley, who she saw performing. She also attended the World’s Fair Women’s Pavilion where she listened to a number of women’s speeches, including Julia Ward Howe, a prominent women’s activist and poet.

Inspired by seeing strong women and enamored by the heroes and legends of the Wild West, she soon mustered the courage to leave her shiftless husband and boarded a train to Trinidad, Colorado. There, she became a popular saloon singer. However, she soon found that she was pregnant with Frederick’s child and returned to her family in Canada. After giving birth to a son, she left him with her mother and traveled west again, this time landing in Phoenix, Arizona. Pearl was disappointed in the “West” not finding the glamour and heroes she had been so enamored with, instead working as a cook in a café and taking in laundry to supplement her income.

However, she stayed and in 1895, her estranged husband Frederick caught up with her. After begging Pearl to come back to him and promising to get a regular job, the couple reunited. True to his word, Fred got a job working as a manager and bartender at a local hotel. While their life seemed to be happier during this time, the pair also began to live a little wildly, frequenting the saloons and gambling parlors on Washington Street, where Pearl learned to smoke and drink, and allegedly use other harsher drugs, including marijuana and morphine.

Inevitably, the couple’s marital problems started up again and after Pearl gave birth to a second child, a girl, Fred said he was bored with domestic life and tired of supporting a family. After a violent argument between the two in 1898, Fred knocked Pearl unconscious and left her to ride off with Teddy Roosevelt’s Rough Riders in Cuba. Pearl once again returned to her parents but had gotten a taste of life in the west and didn’t stay long, leaving her second child there as well.

She was soon back in Arizona, working at odd jobs in many of the mining camps. But a woman alone during these times found it difficult to survive and she became very depressed. She tried to kill herself several times but was saved by acquaintances. 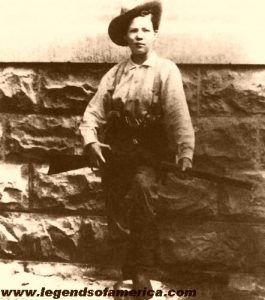 By 1899; however, she had hooked up with a miner named Joe Boot. When she received a letter from her brother that her mother was ill and needed money for medical bills, she turned to Boot for advice. Joe, who had long been planning to rob a train, had several ideas for Pearl to make some quick cash.

Their first scam was for Pearl to lure men into their room, allowing them to think that there was an opportunity for romance. Instead, Joe knocked them out and they took the unsuspecting men’s money. However, this was not lucrative enough, so the pair soon conceived of the idea of robbing a stagecoach.

After careful planning, the couple decided to rob the stagecoach that ran between Florence and Globe, Arizona. To get ready for the heist, Pearl cut off her hair and dressed in Joe’s clothing. On May 30, 1899, they carried out their plan, jumping in front of the stage with their guns drawn and ordering the driver to stop. As Joe kept his gun pointed at the driver, Pearl ushered the passengers out of the coach and emptied their pockets and wallets. After taking about $450 and a revolver, the pair ordered the passengers back in the coach and Joe fired his gun in the air and told the driver to take off.

But, for all their planning, the couple hadn’t prepared for the fact that they were not all that familiar with the surrounding desert hills. Riding off on their horses, they soon got lost. After a couple of days, the couple made camp in a grove of trees and after building a campfire, they fell asleep. Sometime later, when they awoke, they were surrounded by the sheriff and his posse.

Taken to the Globe jail, Hart played up her part as a lady bandit, giving autographs and entertaining those who just wanted to get a glimpse of the “Bandit Queen.” A few weeks after her capture, Pearl escaped from the jail on October 12, 1899, with another prisoner by the name of Ed Hogan. As the posse quickly pursued the pair, Pearl’s legend began to grow throughout the west. But her freedom would be short as the law soon found her and returned her to the jail.

Hart’s trial took place in Florence in November 1899 where she insisted that the court had no right to place her on trial, saying: “I shall not consent to be tried under a law in which my sex had no voice in making.” Though she admitted her guilt, she was still acquitted by the jury, most likely because of her story of robbing the stage only to send her mother money. Her lawyer had also pleaded with the jury that it was her first offense and that she had always obeyed the law in the past.

The trial magistrate, Judge Fletcher Doan, was furious at the verdict, claiming that Pearl “…flirted with the jury, bending them to her will.” He soon replaced the jury and had Pearl re-tried for unlawfully carrying a gun. This time, the jury was not swayed by her charms and she was convicted and sentenced to five years in the Yuma Territorial Prison. Tried in a separate trial, her partner in crime, Joe Boot, was not so lucky, as he received 30 years for his part in the stage robbery. Boot, who was also sent to the Yuma prison, was able to escape in 1901 and was never recaptured or heard of again. He was thought to have fled to Mexico and stayed there.

In the meantime, Pearl became even more of a celebrity while she was in prison and the warden, who liked the attention, accommodated her with a larger than usual cell as well as a few other perks. While there her legend grew as she “entertained” visitors and reporters, often posing for pictures. After just 18 months in prison, she was paroled on December 19, 1902, and moved to Kansas City. There, she planned to profit from her fame as the “Lady Bandit” in a production that her sister wrote about her western adventures. However, her fame faded quickly and she disappeared from public view for a couple of years until she was arrested in Kansas City under the name of Mrs. L.P. Keele for buying stolen canned goods. Afterward, she disappeared again until in 1924, when she visited the old courthouse in Florence where she was tried. While there she said to an attendant with a smile, “nothing has changed.” When he asked who she was, she turned in the doorway and dramatically exclaimed: “Pearl Hart, the lady bandit.

As to what happened to Pearl Hart in the end, it remains unknown. Some reports say that she died in Kansas City where she operated a cigar store in 1925. Others say that she was living in San Francisco, California when she died in 1952. Most often, however; she is credited with having married a rancher in Dripping Springs, Arizona, where she lived out the last days of her life going by the name of Pearl Bywater and died in 1956.

Though she is often credited with being the last person to ever rob a stagecoach, this is untrue as the last actual stage robbery took place on December 5, 1916, near Jarbridge, Nevada. During the hold-up, the bandit, Ben Kuhl, killed the driver and made off with more than $3,000 in gold coins.

Hart is also frequently credited as being the only woman to ever hold up a stagecoach. This is also untrue, as Jane Kirkham was killed when robbing a stagecoach along the road between Leadville and Buena Vista, Colorado on March 7, 1879.