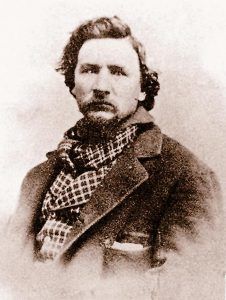 Erastus “Red” Yager was said to have been an outlaw member of Sheriff Henry Plummer’s gang, called the Innocents, in Montana. He was lynched in January 1864 by Montana Vigilantes.

Born in Indiana in 1831, Erastus Yager (or Yeager)  was raised near Moscow, Iowa, and was said to have been a studious, intelligent child. He attended the same school as Granville Stuart, who would grow up to become a Montana Cattle Baron and defend Yager, but unfortunately, too late.

When Yager grew up, he joined his older brother, William, in Washington Territory in 1850. There, he initially helped his brother with the farm before joining a freighting business that served the mining camps. In 1863, he joined a party on its way to the mines in Bannack, Montana, arriving in August.

He soon took a job as a bartender at Rattlesnake Ranch, about 15 miles east of Bannack. Described as a quiet man and a bit of a loner, Yager had never been accused of any crimes. The saloon, situated on the stage road that crossed  Rattlesnake Creek, entertained numerous travelers, and Yager’s quiet ways and courteous manner quickly earned him a solid reputation among them.

However, despite his quiet ways, Yager got into a dispute with one of his bosses, a man named Bill Bunton, who was a known outlaw and gambler and soon found himself jobless. Yager then began to make his way to Virginia City and stopped at the Dempsey Ranch near present-day Twin Bridges. While he was in the saloon, the bartender asked him to carry a letter to a man named Alex Carter. Carter, who had earlier been accused of murder, was wanted by the Montana Vigilantes. As Yager continued his journey, he came upon the vigilantes, who had with them a man named Long John Franck who supposedly knew the identities of the road agents involved with the gang called the Innocents. Franck did not recognize Yager nor identify him as one of those involved.

However, when the vigilantes were trying to track down Alex Carter in Deer Lodge, they found he had escaped, due to a warning, and soon connected his escape to the letter that Yager had been carrying.

The vigilantes were then on a mission to once again find Yager, whom they tracked to the Stinkingwater Valley in Madison County. At first, the vigilantes told him that he would be taken back to Virginia City to stand trial; however, instead, they hanged Yager and another man named George Brown on January 4, 1864. Though there is no written record of a confession, the vigilantes would say that before Yager was hanged, he named a number of gang members and pointed the finger at Sheriff Henry Plummer as the leader.

Various versions of Yager’s life are in conflict, with some having him participating in road agent activities long before he ever arrived in Montana and others stating he was an innocent man. In fact, Granville Stuart, Montana Cattle Baron, and leader of a later vigilante group called, Stuart’s Stranglers, would adamantly dispute any involvement in the gang. Stuart, who had attended school with Yager years ago in Iowa, went on record saying that he doubted that Yager knew any of the names of the outlaw band. 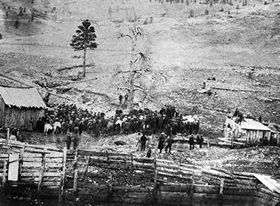