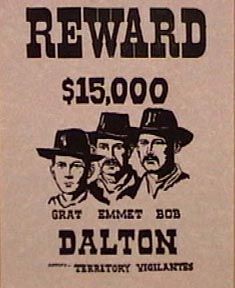 Richard “Dick” Broadwell, also known as Texas Jack and John Moore, was a member of the Dalton Gang who was killed at the Coffeyville, Kansas raid on October 5, 1892.

Richard L “Dick” Broadwell was born to William B. and Elsie Jordan Broadwell in Logan County, Illinois in 1862. His father was an entrepreneur and cattleman. When Dick grew old enough he worked with his brothers running cattle. In the early 1870s, the prominent family moved and settled near Hutchinson, Kansas. Dick was described as “tall, handsome, well-dressed, filled with a jovial spirit of deviltry, he was popular and welcomed everywhere,”

In 1882, at the opening of Oklahoma Territory, Dick and his father staked claims to homestead in the Cowboy Flats area. There, he met and a young lady who owned the homestead next to his and he asked her to marry him. After their marriage, she persuaded him to sell both claims and move with her to Fort Worth, Texas, where she disappeared with their money.

The embittered Broadwell returned to the Indian Territory and started work as a cowboy. While working at the Bar X Bar Ranch near the Pawnee Agency, he met the members of the Dalton Gang. In 1891, he was riding with the gang when they robbed a Kansas, Missouri & Texas train near Wagoner, Oklahoma on September 15, 1891, making off with $2500 from the express car. 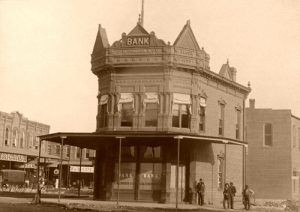 On June 1, 1892, they robbed a train at Red Rock, Oklahoma, but made off with only $50. The gang then attacked another train at Adair, Oklahoma on July 14th. This time they made off with $17,000 in cash, but not before a gunfight erupted, in which two guards and an innocent bystander were killed. After this robbery, a prize of $5,000 was placed on each of their heads.

Afterward, the gang planned on making one last big robbery to get enough money to leave the country. They devised a plan to rob two banks at the same time, something that had never been done before. On the morning of October 5, 1892, Broadwell, along with gang members Bob, Grat, and Emmett Dalton, and Bill Power rode into Coffeyville, Kansas. Though the men were disguised, they were soon recognized and the townspeople fought back. In the end, all of the gang members with the exception of Emmett Dalton were killed.

Dick Broadwell’s family retrieved his body and took it back to Hutchison where he is buried in an unmarked plot in the Eastside Cemetery.

Bad Men of the Indian Nations