Leonard Calvert Brock was an outlaw train robber in the southern United States.

Also known as Will Waldrip, Joe Jackson, and Henry Davis, he was born in Coffee County, Alabama on July 13, 1860, to Joseph E. and  Sallie F. Harrell Brock. Though his father was a physician, Brock was raised on a farm and had limited schooling.

Brock went to Texas in 1886 after stabbing a black man in Alabama. He made his way to various towns including San Antonio, Dallas, and Gainsville, often working with cattle and in the lumber industry. He first met Rube Burrow in the spring of 1886 when he worked with him driving cattle to Fort Worth. 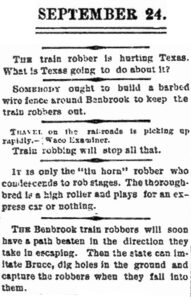 After drifting around for a couple of more years, Leonard, along with his brother, William L. Brock, joined the Burrow Gang in 1888. They were soon aiding the notorious Burrow brothers in a number of train robberies in Texas and Alabama. He was identified as one of the outlaws when the Burrow Gang robbed the Mobile & Ohio Railroad on September 26, 1889. After a substantial reward was posted for him, he was arrested on a train in Columbus, Mississippi in July 1890. After a quick conviction, he was sentenced to a long prison term. However, he committed suicide on November 10, 1890, by jumping from the fourth tier of the cellblock. Brock never married.