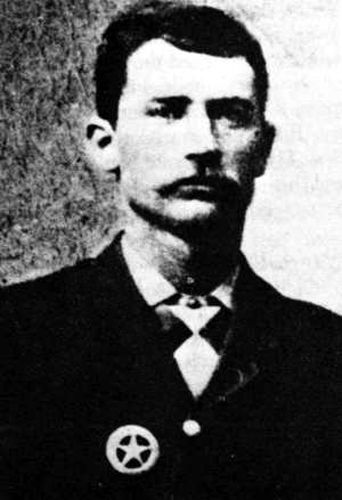 Born in 1857, Henry Newton Brown was orphaned at an early age and raised by relatives in Rolla, Missouri. When he was 17, he headed west to become a cowboy, working on Colorado ranches before drifting south to Texas. There, he killed a cowhand in a gunfight outside a Texas panhandle town and moved on to Lincoln County, New Mexico, where he soon became involved in the Lincoln County War. Fighting on the side of the McSween–Tunstall faction, known as the “Regulators,” he befriended Billy the Kid.

He rode with Billy the Kid’s Gang, rustling cattle, and continued with the gang when they went to the Texas Panhandle in 1878 to steal horses.

When the Kid returned to New Mexico, Brown decided to stay in Texas, which probably saved his life for a few more years.

He then worked as a deputy sheriff in Oldham County, Texas but was soon fired for picking fights with drunks. Afterward, he moved on to Oklahoma, where he worked on several ranches before making his final move to Caldwell, Kansas.

In 1882, he was hired as an assistant marshal in Caldwell and later was promoted to marshal. Brown hired his friend Ben Wheeler, also known as Ben Robertson, to work as a deputy, and the two men “cleaned up” the tough town quickly. When Brown felled two outlaws in the streets of Caldwell in 1883, the Caldwell Post bragged that Brown was “one of the quickest men on the trigger in the Southwest.” So taken were the town citizens that they presented him with a new, engraved Winchester rifle.

The marshal continued to serve the city well, and the Caldwell Commercial lauded him as “cool, courageous and gentlemanly, and free from vices.” In the early spring of 1884, he married a local woman, purchased a house and furnishings, and seemingly settled down. However, unbeknownst to his wife and the citizens of Caldwell, Brown had been living beyond his means, and the debts were mounting. 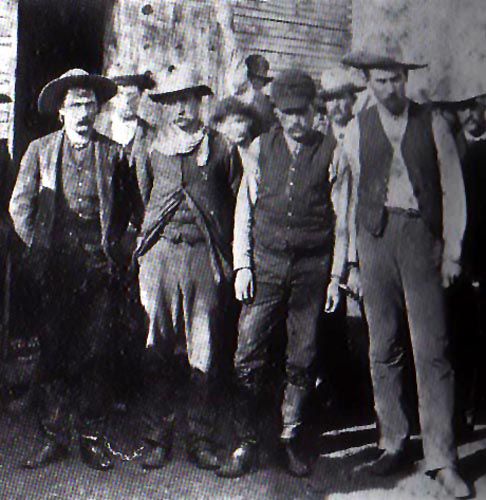 Falling back on his old outlaw skills, Brown, along with his deputy, Ben Wheeler, and two other former outlaw friends named William Smith and John Wesley, planned to rob the bank in Medicine Lodge, Kansas. Under the ruse of traveling to Oklahoma to apprehend a murderer, the lawmen left Caldwell, met up with the two other would-be bank robbers, and headed to Medicine Lodge. They entered the bank on April 30, 1884, just after it opened, and demanded cash. When Bank President E.W. Payne reached for his gun, Brown shot him to death. Though Chief Cashier George Geppert had his hands up, he too was shot. However, before he died, he staggered to the vault and managed to close the door.

Their robbery attempt failed; the gang quickly mounted their horses and fled with an angry posse right behind them. Just outside of town, the posse trapped them in a box canyon and after a two-hour shoot-out, the outlaws finally surrendered. Taken to the Medicine Lodge jail, a mob outside chanted, “Hang them! Hang them!”

The outlaws were given a meal, their photo was taken, and told to write letters to their families.

At about 9:00 p.m., the mob broke into the jail, demanding the prisoners. The sheriff refused but was overpowered by the mob of men, and the jail doors opened. As the prisoners attempted to dash for freedom, Brown was shot and killed, his body riddled with bullets. Wheeler was also wounded but was dragged along with Wesley and Smith to a nearby elm tree and hanged.