“The grimly humorous phrase about our town was that Tombstone had a man for breakfast every morning.”

Tombstone, Arizona, one of the most lawless mining camps in the American West, was soon dubbed “The Town Too Tough to Die.” 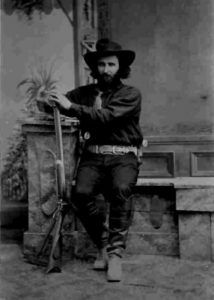 The mining camp was born when a prospector named Ed Schieffelin looked out on the mountains from where he stood at Camp Huachuca, Arizona. Thinking that the rich colors of the mountains looked like a promising place to prospect, he commented on this to a nearby soldier. However, the soldier was quick to warn him that the area was controlled by the Apache and responded to him “All you’ll find in those hills is your tombstone.”

However, Schieffelin was not deterred, and the next year, in February 1878, he set out to hills alone in search of his fortune. After hiding for two nights from Apache Indians, he spied what looked like it might be a silver vein on a ledge high above his hiding place. Climbing to the ledge, he pried out several pieces of pure silver and was elated when he estimated the vein to be some fifty feet long and twelve inches wide. Remembering the soldier’s warning he called his vein, which would later become a mine, “Tombstone.”

Ed collected a bag of samples and put up two claim markers – the second claim, he called “Graveyard.” He then traveled to Tucson to file his claim and afterward struck out for Signal, Arizona (now a ghost town,) where his brother lived, hoping for a grubstake.

When Ed’s brother, Al, wanted no part of such a wild venture, the disappointed Ed took a job for a short time in the McCracken Mine. However, he continued to search for help. 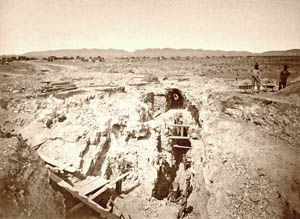 Toughnut Mine in Tombstone, Arizona.

Soon, he took his samples to Richard K. Gird, a Signal assayer, who pronounced that Schieffelin’s ore was very rich. Gird immediately offered to finance the development of a mine for a 1/3 interest in the claim. Brother Al, quickly changed his mind, upon finding out this information, and also became involved, the three becoming equal partners.

On the way back to the mountains Ed found two more sites laden with silver ore, registering the claim as “Lucky Cuss” and “the Toughnut.” All of Ed’s claims would soon become mines. In no time at all, word spread that silver had been discovered and other prospectors began to search the area. Before long, more mines began to open including, the Grand Central, the Charleston, and the Contention mines, and a mining camp was born named after Ed’s first claim – Tombstone.

Tombstone’s post office was established on December 2, 1878, and has never been discontinued. On March 5, 1879, an official townsite was laid out and lots were sold on Allen Street for five dollars each. Soon, Tombstone had some 40 cabins and about 100 residents.

As word continued to spread more and more people began to come to the area including the Earp brothers who began to arrive in the fall of 1879. Tombstone quickly became a boomtown.

Ed Schieffelin was more interested in prospecting than in becoming a businessman a continued to prospect the area. When he returned after a four-month prospecting trip, his brother Al had found a buyer for their claims as the capital required to develop silver mine was more substantial than the partners could afford. The brothers, Al and Ed would soon sell out their interest for $600,000 each, while Richard Gird took his payment in company stock. Gird would eventually make a considerable amount more as a conservative estimate of the mines ended up producing some $40 million dollars in silver, an amount that would equal $1.7 billion today. Ed Schieffelin took his money and left Tombstone traveling for an extended period then pursuing a new mining adventure in the Yukon.

When Wyatt Earp arrived in Tombstone in December of 1879, he planned to establish a stage line but soon discovered there were already two in the town. Instead, he partnered with the owner of the Oriental Saloon to run a gaming business for a quarter percent of the proceeds. He also took a side job as a shotgun rider on the stage lines for Wells Fargo shipments.

James Earp established a saloon on Allen Street. Virgil Earp was already deputy marshal of Tombstone and Morgan went to work with his brother as a lawman.

Doc Holliday and Big Nose Kate would arrive in Tombstone in early 1880. Kate quickly realized the opportunity in Tombstone, setting up a large tent with several girls and lots of cheap whisky, becoming the first “sporting house” in town. Doc resumed his habit of gambling as usual.

Before the arrival of the Earps, there was a working faction of cowboys in the area that lived off of rustling cattle and robbing stagecoaches. These included the outlaw Clanton Gang, with “Old Man” Clanton and his sons, Ike, Phin, and Billy.

Others included the McLaury brothers, Frank and Tom; Curly Bill Brocius, and Johnny Ringo. The notorious cowboys and their followers lost no time in expressing their displeasure at the arrival of the Earps.

On May 1, 1880, the Tombstone Epitaph, the oldest continuously published newspaper in Arizona, was begun. By June 1880 there were some 3,000 people in the new town which had attracted its share of drifters, dancehall girls, outlaws, saloon keepers, and gamblers. Before long, Tombstone would be hailed as one of the most violent towns in the Southwest. The Tombstone, Toughnut and Richmond Mines were producing millions in silver and the town continued to grow. 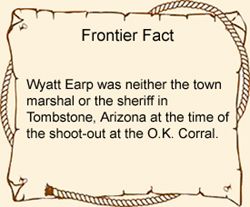 By 1881 there were some 8,000 people in the town that boasted more gambling houses, saloons, and the largest “red light” district in the Southwest. The town also supported four churches, a school, two banks, and an opera house.

In February 1881, former Dodge City, Kansas lawmen Bat Masterson and Luke Short joined Wyatt Earp in Tombstone. Both worked with Wyatt at the gaming tables at the Oriental Saloon. On February 25, 1881, Short got into a dispute with a man named Charlie Storms which resulted in a gunfight in the street. Charlie Storms soon lay dead in the dust from Short’s quick drawn six-gun. Masterson stayed in Tombstone just a few short months before he was urgently summoned back to Dodge City to help his brother Jim.

Meanwhile, the Cowboy faction continued to rustle cattle in the area; however, Deputy Marshal Virgil Earp could do nothing about it, as stealing cattle was a county offense for which the town of Tombstone had no jurisdiction. The Earp brothers, as well as Doc Holliday constantly found themselves at odds with the Cowboy faction, with multiple disputes between the “law” and the “lawless.”

On June 22, 1881, a fire destroyed most of the eastern half of Tombstone’s business district. Having no water to put out the fire, buildings in the path of the fire were dynamited to slow the engulfing flames. The citizens of Tombstone blamed Marshall Ben Sippy for not controlling the looting that followed the fire and Virgil Earp, the senior deputy, was soon appointed marshal, a move that antagonized the already hostile Clantons. 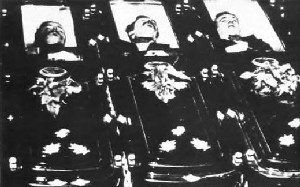 The McLaurys and Clanton Dead

On October 26, 1881, the tension between the two factions finally culminated in the gunfight at the OK Corral, thirty seconds which would long be remembered in history.

The gunfight between Virgil, Wyatt, and Morgan Earp, along with Doc Holliday, against five members of the Clanton Gang, would leave Billy Clanton, Tom and Frank McLaury dead. Virgil Earp took a shot to the leg and Morgan suffered a shoulder wound. As Wyatt stood, still stunned, Sheriff Johnny Behan appeared advising him he was under arrest.

The Earps and Doc Holliday were tried for murder but it was determined that the Earps acted within the law. Virgil was later terminated as marshal for his role in the homicides.

On March 18, 1882, the cowboy gang killed Morgan Earp in retaliation for the OK Corral gunfight. The entire Earp party would leave with Morgan’s body headed to California. However, Wyatt and Warren Earp, along with Doc Holliday would jump off the train in Tucson and spend the next year chasing down the members of the Clanton Gang and killing them one by one. However, neither the Earps nor Holliday would ever return to Tombstone. 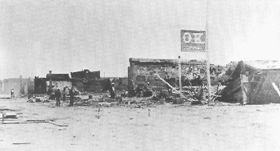 The O.K. Corral burns Down

On May 25, 1882, another fire devastated Tombstone, destroying most of the western half of Tombstone’s business district, including the O.K. Corral. But the resilient citizens of the town would once again rebuild.

The Cochise County Courthouse was built in 1882. At about the same time, the Bird Cage Theatre brought “culture” to the community, though it also served as a saloon, gambling hall, and brothel. The New York Times called it, “the wildest, roughest, wickedest honky-tonk between Basin Street and the Barbary Coast.” That statement was well deserved since the Bird Cage was the scene for twenty-six deaths during its eight years of business.

In 1886, a well was drilled striking water and the citizens were thrilled. However, what they didn’t realize was that this newfound water would end the mining boom and almost end the town. Immediately, water began to seep into the many mines of the area. Though giant pumps were installed, the seepage could not be stopped. When a fire burned the pumps of the Grand Central Mine in 1886, the water claimed the mine for good. The disgruntled miners soon found new employment in the copper mines of Bisbee and other new mining towns. The nearby towns of Charleston and Millville completely died and Tombstone lost its boom-town status and began to fade.

In 1890, more sophisticated pumps were brought into the mines and they began to open increasing Tombstone’s population once again. However, by the turn of the century, new flooding would begin that would entirely stop the mining for good.

In 1929 a vote moved the county seat to Bisbee, some 25 miles away and Tombstone was truly destined to become a ghost town. However, resilient citizens banded together to save the town. Leaning on its rich history they began to focus on Tombstone’s opportunity for tourism. Historic buildings were repaired and restored. Boot Hill became a top attraction and the famed shootout was re-enacted to thrill visitors. Movies and books began to be written about Tombstone which further gave life to the dying town.

The infamous Allen Street, once full of bars, casinos, and bordellos has been restored to attract visitors. The original 1882 Cochise County Courthouse and gallows are now a State Historic Park.

This old town, full of life and history, survives the test of time and is well worth the visit. Tombstone, Arizona is conveniently located just 70 miles southeast of Tucson and very close by Benson, Arizona. Hotels and dining are abundant in the area including in Tombstone. 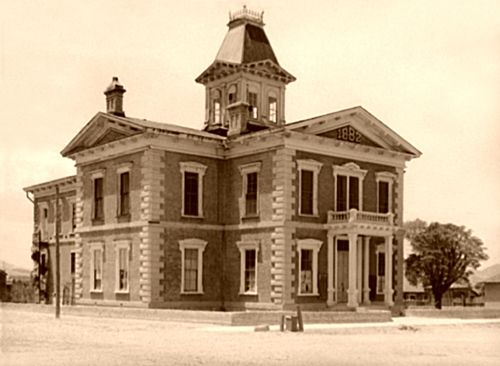