America’s progression toward Civil War over the issue of slavery dated back over 200 years before the final conflict. Here is a timeline of notable events.

1619 – English settlers in Virginia purchase 20 African indentured servants from a Dutch ship. Not slaves, the Africans would ultimately earn their freedom after working for a certain number of years. However, it was not long after that any Africans arriving in America were treated as slaves — bought and sold into a lifetime of slavery, along with any of their offspring.

1663 – Maryland becomes the first colony to enact laws that recognize slavery for life. Under prior English law slaves who became Christians were granted freedom. 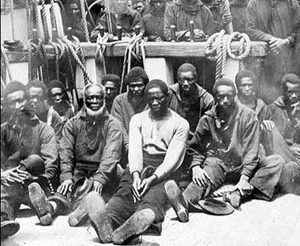 1667 – Virginia passed a law that allowed for slaves that converted to Christianity to become free.

1688 – In February, the first organized protest against slavery in the new world was drafted by a group of Quakers in Germantown, Pennsylvania. Known as the Germantown Protest, it argued that Christians should do as they would want to be done to them, that slavery was essentially theft as you were buying something stolen, and that adultery is wrong yet slave traders/owners forced adultery on men and women by breaking up marriages when they resold husbands and wives to different owners.

1739 – In September, in the town of Stono, South Carolina a band of slaves started an insurrection. Previous runaway slaves had made their way to Florida, where they had been given freedom and land by the Spanish, who had issued a proclamation stating that any slave who deserted to Florida would be given freedom.

1775 – The Pennsylvania Abolition Society is organized to protect the rights of blacks unlawfully held as slaves. 1776 – In July, the 13 colonies declared independence from England with the adoption of The Declaration of Independence. Written largely by Thomas Jefferson, the document declares “all men are created equal,” even though Jefferson and many of the signers of the document were slaveholders.

1777 – Vermont, an American colony and not yet a state, is the first government entity to abolish slavery.

1780 – Pennsylvania became the first state to abolish slavery with the law calling for gradual abolition.

1787 – At the 1787 Constitutional Convention in Philadelphia, delegates debated whether Congress should halt the importation of slaves. South Carolina and Georgia delegates threatened that their states would not join the new Union being planned and won concessions that the slave trade could not be restricted for 20 years.

Congress passed the Three-Fifths Clause stating that each slave is to be counted as three-fifths of a person for determining representation in Congress, which dramatically strengthened the power in the House of Representatives for slave states. 1787 – In July, Congress passes the Northwest Ordinance, preventing slavery from existing in the new federal territories.

1790 – The results of the first national census shows that of a total population of nearly 4 million people in the United States, 18% are slaves. Maine, Massachusetts, and Vermont have no slaves, while 43% of the population in South Carolina are slaves, 39% in Virginia, and 35% in Georgia.

1791 – Vermont becomes the fourteenth state and enters the Union as a free state.

1792 – In June, Kentucky becomes the 15th state and enters the Union as a slave state.

“Whenever I hear anyone arguing for slavery, I feel a strong impulse to see it tried on him personally.”  — Abraham Lincoln

1793 – In February, Congress passes the first Fugitive Slave Act which allows for the recovery of runaway slaves, authorizes the arrest and/or seizure of fugitives, and creates a fine of $500 for any person who aids a fugitive. 1794 – In March, Eli Whitney receives a patent for inventing the Cotton Gin, which dramatically increased production of cleaned cotton and making cotton a profitable crop and increasing the need and value of slaves.

1796 (June) – Tennessee becomes the 16th state and enters the Union a slave state.

1800 – The results of the 1800 census show a total population of a little more than five million, 17% of which are slaves. Slaves are virtually non-existent in northern states and as high as 42% in South Carolina and 39% in Virginia. 1800 – In August, a slave named Gabriel Prosser leads a group of armed slaves in rebellion. His plan involved seizing Capitol Square in Richmond, Virginia and taking Governor James Monroe as a hostage, in order to bargain with city authorities for freedom. Ultimately, Gabriel, along with many followers, were captured and executed.

1803 – In March,  Ohio becomes the 17th state and enters the Union as a free state based on the terms of the Northwest Ordinance.

1807 – In March, Congress passes law banning the importation of any new slaves into the United States effective January 1, 1808.

1810 – The results of the 1810 census show a U.S. population that nears 7 million, with 17% of them being slaves. Slaves are virtually non-existent in northern states and as high as 47% in South Carolina and 42% in Georgia.

1812 – In December, Louisiana becomes the 18th state and enters the Union as a slave state.

1816 – In December, Indiana becomes the 19th state and enters the Union as a free state.

1817 – In December, Mississippi becomes the 20th state and enters the Union as a slave state.

1818 – In December, Illinois becomes the 21st state and enters the Union as a free state.

1819 – In December, Alabama becomes the 22nd state and enters the Union as a slave state. 1820 – The results of the 1820 census show of a total population of a little more than 10 million, 15% are slaves, though they are virtually non-existent in the northern states. However, in the South, it as high as 51% in South Carolina and 45% in Louisiana.

1820 – In March, the Missouri Compromise is negotiated allowing Maine to be admitted to the Union as a free state and Missouri as a slave state in 1821. This act will maintain a balance between free and slave states. The compromise established the 36 degree, 30′ parallel of latitude as a dividing line between free and slave areas of the territories.

1828 – Congress again raises tariffs with the Tariff of Abominations. Designed to support American industry, they are successful in benefiting the northern industrial economy but are damaging to the southern agricultural economy.

“The fact is, that civilization requires slaves. Human slavery is wrong, insecure, and demoralizing. On mechanical slavery, on the slavery of the machine, the future of the world depends.”  — Oscar Wilde