Springfield, Illinois, is the state’s capital, the county seat of Sangamon County, a Route 66 city, and was once called home to Abraham Lincoln.

The pioneer settlement of Springfield began when John Kelly, his wife Mary, their five children, and John’s brother, Elisha, arrived in the area in the spring of 1819. The following year, they built the first cabin at the northwest corner of Second and Jefferson Streets in 1820. Other pioneers from North Carolina, Virginia, and Kentucky followed, taking advantage of the area’s fertile soil and trading opportunities.

In 1821, Zachariah Peter, William Drennan, and Rivers Cormack drove a stake in the ground at a point in the prairie near John Kelly’s field, and a town was officially born. It was first named Calhoun after Senator John C. Calhoun of South Carolina. A trail traveling past John Kelly’s cabin brought supplies to the settlement from the Illinois River and soon became the first street, called Jefferson. In the same year, Elijah Iles opened the first store on Jefferson Street, purchasing goods from St. Louis, Missouri, and having them brought to the settlement. Calhoun then was designated as the county seat of Sangamon County

The school was first taught in a log building during the winter of 1821-22. Like most pioneer settlements, it took no time for taverns to spring up, the first of which was opened by Elijah Slater in 1822, where travelers were provided with food, drink, and a place to stay. Two more taverns quickly followed. In 1830 the Methodists built the first church in the burgeoning community, and the Presbyterians opened a new brick church just one month later.

In 1832, Senator John C. Calhoun, for whom the settlement was named, fell from public favor, and the town’s name was changed to Springfield. The town was officially incorporated on April 2, 1832, and by 1835, Springfield had grown enough that the Board of Trustees saw the need for law enforcement, and a constable was appointed. 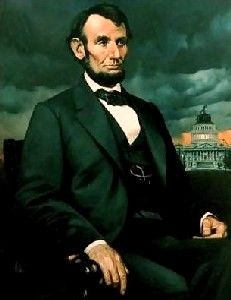 In 1837, mainly due to the political maneuverings of a young politician named Abraham Lincoln, the state capital was moved from Vandalia to Springfield. On April 15, 1837, Lincoln moved to Springfield from nearby New Salem and began practicing law with John T. Stuart, a prominent Springfield attorney.

Before Lincoln moved to Springfield, the young man had tried his hand at several endeavors, including clerking at Denton Offutt’s store in New Salem, becoming a postmaster, a surveyor, and a law student, before running for the state legislature in a losing campaign. In 1834, he was elected to the legislature on his second try. It was during this term in office that he influenced the placement of the State Capital in Springfield.

During Lincoln’s time in Springfield, he had three different law partners, the last of which eventually became his biographer.  He spent many days riding the Eighth Judicial Circuit and practicing in county courthouses all around central Illinois. Practicing law provided Lincoln with the status and visibility that contributed to his success in politics. 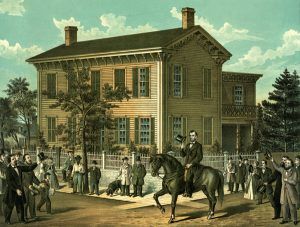 Abraham Lincoln at his home in Springfield, Illinois by Rees Print & Litho. Co.

In 1840, Lincoln met a Kentucky belle named Mary Todd, and after a stormy, sporadic courtship, the couple was married by the Reverend Charles Dresser in 1842. Their first son, Robert Todd Lincoln, was born on August 1, 1843. The following spring, Lincoln bought the Reverend Dresser’s home on the corner of Eighth and Jackson streets for $1,200 cash and a small lot worth $300. The Lincolns occupied this brown frame house for the next 17 years. This home still stands in Springfield today at 413 S. 8th Street and is part of a National Historic Site that includes several other structures within the four-block area. All the homes have been restored to their appearance during the time Lincoln lived in the neighborhood.

While practicing his profitable law career, Lincoln continued to be active in politics, and on November 6, 1860, he was elected president.

On February 11, 1861, Lincoln stood on a train station platform and, in a voice filled with emotion, shared his parting words for Springfield, Illinois. To the large crowd that gathered, he said: 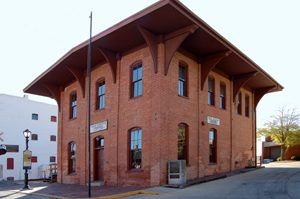 “My friends – No one, not in my situation, can appreciate my feeling of sadness at this parting. To this place and the kindness of these people, I owe everything. Here I have lived a quarter of a century and have passed from a young to an old man. Here my children have been born, and one is buried… To His care I am commending you, as I hope in your prayers you will commend me, I bid you an affectionate farewell.”

He left Springfield that day and would never return during his lifetime.

Though the Civil War took many men from Springfield in the fight for the Union, it also boosted Springfield’s economy with numerous new industries and businesses. With its State Capitol status, the town continued to grow.

When Route 66 came through Springfield, the town responded with even more businesses targeted to the many travelers of the new highway. Gas stations, cafes, and motels sprang up overnight.

In January 1977, when the Route 66 signs came down, many of these longtime businesses died the inevitable death of being bypassed by the superhighway. However, many of these old icons still stand in this proud city, and Springfield is dedicated to the memory of its rich history, including the Mother Road. The city today is called home to about 114,700 people. 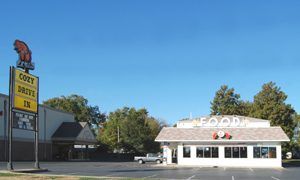 The Cozy Drive-In on Route 66 in Springfield, Illinois by Kathy Weiser-Alexander. 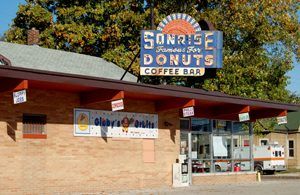 Sonrise Donuts on Route 66 in Springfield, Illinois by Kathy Weiser-Alexander.

Several museums and historic sites can be seen in Springfield, including Abraham Lincoln’s longtime home, burial site, and presidential library.

Downtown, the historic district provides many examples of preserved nineteenth-century architecture, where you can walk through the very same streets as did Abraham Lincoln. Check out the Old State Capitol Building, where Lincoln delivered his famous “House Divided” speech. The Old State Capitol Historic Site was the center of the Illinois government from 1839 to 1876 and is considered among the most important 19th-century public buildings in the United States. After his assassination, President Lincoln’s body lay in state in the second-floor House of Representatives. The Old State Capitol Building is located at 2nd and Capitol Streets. The present-day capitol building and governor’s mansion are also in this area. 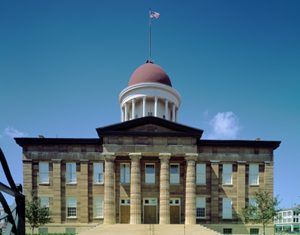 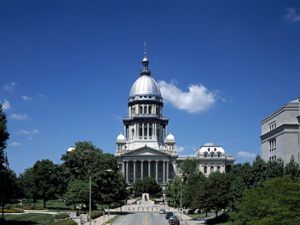 As you continue your travels southward along Route 66 out of Springfield, you will have to choose between two alignments that are still intact today.

The pre-1930’s two-lane alignment meanders through Chatham and Auburn — where you can see a piece of brick alignment — before moving on to Thayer, Virden, Girard, Nilwood, Carlinville, Gillespie, Benld, Sawyerville, and Staunton. South of Staunton, the road rejoins with the later alignment.

The newer alignment (1930-1977) begins as a four-lane road in Springfield closely following I-55 and will take you to Glenarm, Divernon, Farmersville, Litchfield, Mt. Olive, and Livingston.

If you travel the older alignment (pre-1930), you will see the Route 66 Drive-in at 1700 Recreation Drive, which shows movies nightly.

As you travel down the Mother Road, you’ll pass over Lake Springfield. A manmade lake in the 1930s covers parts of the original two-lane alignment of Route 66. When the water level is low, glimpses of the old road can still be seen. You might want to plan your trip to Springfield the last week in September when the enthusiastic Route 66 city holds the Route 66 Mother Road Festival every year. Join thousands of others to relive the good old days, see dozens of vintage automobiles and celebrate the Rock and Roll era.

Or, as an alternative, travel through the city in late August when Springfield hosts the Illinois State Fair each year. Regardless of when you visit this historic city, plan on taking your time here, as there is much to see.