Re-enactors fire cannons during the 149th Anniversary of the Battle of Chickamauga, Georgia, by Dave Alexander.

“This…is the death-knell of the Confederacy.”

— A Confederate soldier after the Battles of Chickamauga and Chattanooga.

In the fall of 1863, in some of the hardest fighting of the Civil War, Union and Confederate forces fought for control of Chattanooga, Tennessee, a key rail center known as the “Gateway to the Deep South.” The Confederates were victorious at nearby Chickamauga, Georgia, in September. However, renewed fighting in Chattanooga in November provided Union troops victory and control of the city. After the fighting, one Confederate soldier ominously wrote, “This…is the death-knell of the Confederacy.”

Eluding his Federal pursuers, General Bragg concentrated his forces at LaFayette, Georgia, some 26 miles south of Chattanooga. Here, reinforcements swelled his ranks to more than 66,000 men. Twice, General Braxton Bragg unsuccessfully tried to destroy segments of General Rosecrans’ army. Then, on September 18, 1863, hoping to wedge his troops between the Federals and posted his army on the west bank of Chickamauga Creek.

On the morning of September 18, 1863, three advanced brigades of Confederate General James Longstreet’s Corps from Virginia arrived at Ringgold, Georgia. One brigade immediately joined Brigadier General Bushrod R. Johnson’s division as it prepared to cross Chickamauga Creek at Reed’s Bridge. Under Colonel Robert H. G. Minty and mounted infantry under Colonel John T. Wilder’s command, guarding the bridges, Union cavalry offered stout resistance. It delayed the crossing of the southern troops for several hours. During the skirmishing, Minty’s men dismantled Alexander’s Bridge and forced Walker to proceed to Lambert’s Ford, a half-mile downstream. The Confederates used other fords and crossings throughout the late afternoon and night as all of the forces, except three divisions, crossed to the west side of Chickamauga Creek.

The Union forces were not idle, and during the night, General Rosecrans moved Thomas’ corps northeastward above and back of Crittenden so that General Bragg would not outflank the Federal line. Negley’s Division remained near Crawfish Springs (now Chickamauga), Major General Joseph J. Reynolds’ Division near Widow Glenn’s, and Brigadier Generals Absalom Baird’s and John M. Brannan’s Divisions covered the roads leading to Reed’s and Alexander’s Bridges. General McCook’s Corps moved into position in McLemore’s Cove.

The situation at dawn on the 19th found the two armies facing each other over a stretch of several miles along Chickamauga Creek banks. In a short time, Rosecrans had been able to maneuver the Army of the Cumberland into position so that it interposed between General Bragg and Chattanooga. His Reserve Corps under General Granger was at McAfee’s Church, near Rossville, Georgia. Thomas’ Fourteenth Army Corps composed the Union’s left a few miles south of Granger and formed a southwesterly line to Crawfish Spring where it joined McCook, forming the right in McLemore’s Cove. Crittenden’s 21st Army Corps remained concentrated at Lee and Gordon’s Mills, somewhat in front of the other two corps, to protect the Union.

Early in the morning of September 19, Major General George H. Thomas ordered Brigadier General John M. Brannan to reconnoiter the Confederate forces that had crossed Chickamauga Creek. In this manner, Colonel John T. Croxton’s brigade of infantry accidentally ran into some of Confederate General Nathan B. Forrest’s cavalry, which was dismounted and serving as infantry, at Jay’s Mill near Reed’s Bridge. And so the battle began.

Union Colonel Croxton drove General Nathan B. Forrest and his men back, but reinforcements hurried in and forced Croxton to give ground. Suddenly, the commanding generals realized that a major conflict was upon them, and they hurriedly sent troops into the fight as first one side, and then the other gained the upper hand. Union General Rosecrans, by rapid and forced marches, brought up his troops from Crawfish Springs. Confederate General Bragg ordered his left-wing divisions to cross to the west side of Chickamauga Creek. By mid-afternoon, major fighting had spread along a jagged line some three miles in length. Except for Union Major General Gordon Granger’s reserve force, all the Union divisions became involved. The Confederate troops were also largely engaged, except Generals T.C. Hindman and J.C. Breckinridge, who had crossed over during the late afternoon and night.

When the battle ended for the day, little progress could be shown by General Bragg’s troops had reached the LaFayette-Chattanooga Road but were not able to hold the position. Neither side could claim a victory. Bragg had failed to crush the Union left, and General Rosecrans remained in possession of Chattanooga roads. The losses on both sides were heavy.

As night fell and darkness settled over the battlefield, the fighting stopped, but there was little rest for the weary soldiers. Rosecrans brought the Army of the Cumberland into a more compact defensive line; Thomas’ Corps, heavily reinforced, formed the left in a bulge east of the LaFayette Road at Kelly’s Field. 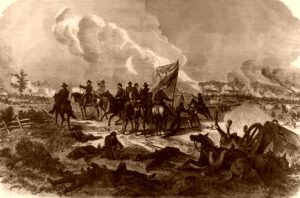 Throughout the night, the Confederates heard the ring of axes as the Union troops cut trees and logs to form breastworks. General Alexander McCook’s Corps in the center faced Lafayette Road; Major General Thomas L. Crittenden’s Corps on the right was a little withdrawn west of the road.

During the night, Confederate General James Longstreet arrived with two more brigades ready for action. General Bragg then decided to form the Army of Tennessee into two wings for offensive action the next day. He placed Lieutenant General Leonidas in command of the right-wing and General Longstreet, the left. The Confederate Army, facing west between Chickamauga Creek and the LaFayette Road, formed a line more or less parallel with the road.

On September 20th, Confederate General Braxton Bragg again tried to drive between the Union force and Chattanooga but failed to dislodge Major General William Rosecrans‘ line. Suddenly, a gap opened in the Federal ranks, and Confederates smashed through, routing Rosecrans and half his army. General George H. Thomas took command of the remaining Federals and formed a new battle line on Snodgrass Hill. Here, his men held their ground against repeated assaults. After dark, Thomas’ forces withdrew from the field to the defenses of Chattanooga. The Confederates pursued and besieged the city. The Southerners prevented Federal supplies from entering the city by placing artillery on the heights overlooking the river and blocking the roads and rail lines. 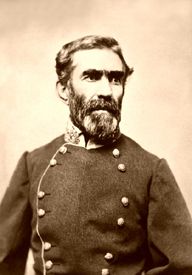 Within days of Grant’s arrival in October, the situation began to change dramatically. Federal troops opened a supply route, nicknamed the “Cracker Line,” from Bridgeport, Alabama. On November 23, Thomas’ men attacked and routed the Confederates from Orchard Knob, Tennessee. On the 24th, aided by a heavy fog that enshrouded the slopes of Lookout Mountain, Hooker’s soldiers pushed the Confederates out of their defenses. On November 25, most of General Bragg’s army now concentrated on Missionary Ridge. General Ulysses S. Grant launched General Sherman’s troops against the Confederate right flank and sent Hooker’s men from Lookout Mountain to attack the Confederate left.