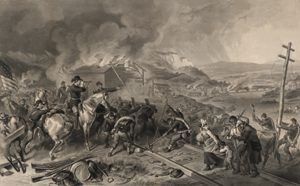 At Rome, Georgia, when parting with one of the officers he was sending back to Tennessee, Union General William T. Sherman said, “If there’s to be any hard fighting, you will have it to do.” He perfectly understood that there was no sufficient force in Georgia to thwart his plan or even to delay his march. Before leaving Atlanta he pointed out to one of his principal subordinates that a National army at Columbia, South Carolina, would end the war unless it should be routed and destroyed. Deprived of the material support of all the States but North Carolina, it would be impossible for the Confederate Government to feed its army at Richmond, Virginia, or to fill its treasury. The experience it had with the country west of the Mississippi River proved that a region isolated from the rest of the Confederacy would not furnish men or money, and could not furnish supplies; while anxiety for their families, who were within the National lines, tempted the soldiers from those States to desert, and weakened the confidence of the whole army.

In such a situation, credit would be destroyed, the Confederate paper money would become worthless, its foreign assistance would be cut off, and the rebellion must end. The one chance left would be for Confederate General Robert E. Lee to break away from Union General Ulysses S. Grant, overwhelm Sherman, and re-establish the Confederate power in a central position by the abandonment of Virginia. But, this implied that Lee could break away from Grant, who, on the south side of Petersburg, was as near Columbia as his opponent, and would be close upon his heels from the moment the lines about Richmond, Virginia were abandoned.

If Sherman, therefore, should reach Columbia with an army that could resist the first onslaught of Confederate General Robert E. Lee, the last hope of the Confederacy would be crushed between the national forces meeting from the east and west. Of course, this implied that Union Major General George H. Thomas should, at least, be able to resist Confederate General John Bell Hood until the Eastern campaign should be ended, when, in the general collapse of the Richmond Government, Hood must abandon the hopeless cause, as Confederate General Joseph E. Johnston was in fact forced to do after General Robert E. Lee’s surrender in the following spring.

Establishing a new base upon the sea was a necessary part of such a plan so that the practical separation of the Carolinas from the Gulf States could only be accomplished. This would require the thorough destruction of railway lines in Georgia. The army could live upon the country while marching, but, it must have the ordinary means of supply within a very few days from the time of halting, or it would starve. The country through which it moved was hostile, no local government could be made to respond to formal requisitions for subsistence, and the wasteful method of foraging itself made it a necessity for moving on into new fields. A rapid march to the sea, the occupation of some harbor capable of becoming a fortified base, and the opening of lines of ocean communication with the great depots of the North must, therefore, constitute the first part of the vast project. Beyond this, Sherman did not venture to plan in detail and recognizing the possibility that unlooked-for opposition might force a modification, he kept in mind the alternative that he might have to go west rather than east of Macon. He requested that the fleets on the coast might watch for his appearance at Morris Island near Charleston, South Carolina; at Ossabaw Sound just south of Savannah, Georgia; and at Pensacola, Florida and Mobile, Alabama. If he should reach Morris Island, it would naturally be by the way of Augusta, Georgia and the left bank of the Savannah River. Ossabaw Sound would, in like manner, indicate the route by way of Milledgeville, Millen, and the valley of the Ogeechee. The Gulf ports would only be chosen if his course to the east should be made impracticable.

On November 12, 1864, communication with the rear was broken. The railway bridge at Allatoona, Georgia was taken to pieces and carried to the rear to be stored; but, from the crossing of the Etowah River, southward to Atlanta, the whole line of the road was thoroughly destroyed. The foundries, machine shops, and factories at Rome were burned, lest they should be again turned to use by the enemy, and on the 14th, the army was concentrated at Atlanta. The troops from numerous corps and divisions, under various commanders, was estimated to be more than 59,000 men, but, furloughed men and recruits hurried so fast to the front in those last days that the muster at Atlanta showed a total of over 62,000.

No pains had been spared to make this a thoroughly efficient force, for an army in an enemy’s country and without a base, cannot afford to be encumbered with sick, or to have its trains or its artillery delayed by weak or insufficient teams. The artillery was reduced to about one gun to a thousand men, and the batteries usually to four guns each with eight good horses to each gun or caisson. Twenty days’ rations were in hand, and 200 rounds of ammunition of all kinds were in the wagons. Droves of beef cattle to furnish the meat ration was ready to accompany the march, and these grew larger rather than smaller as the army moved through the country. 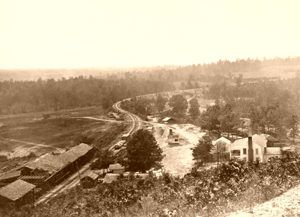 The determination to abandon Atlanta also involved the undoing of much work that had been done there in the early autumn. As the town could not be used by the National forces, the defenses must be destroyed, the workshops, mills, and depots ruined and burned. This task had been given to Colonel Poe, Chief Engineer, and was completed by the time the army was assembled and ready to march southward. On the morning of November 15th, the movement began. The two corps of each wing was ordered to march upon separate roads, at first diverging sharply, and threatening both Macon and Augusta. Sherman himself accompanied the left wing, which followed the line of railway leading from Atlanta to Augusta; for, by doing so, he could get the earliest and best information of any new efforts the Confederate Government might make for the defense of the Carolinas. In this way, he could best decide upon the proper direction for his columns after he reached the Oconee River.

The general line of Sherman’s march was between the Ocmulgee and Oconee Rivers, though he sent his right wing, at first, along the Macon Railroad by more westerly routes, for the purpose of deceiving the enemy, and to drive off Confederate General Joseph Wheeler’s cavalry and some 3,000  Georgia Militia, under General G. W. Smith, which had been assembled at Lovejoy’s Station for some days. General Oliver O. Howard’s right (Fifteenth Corps) marched by way of Jonesborough, McDonough, and Indian Spring to the crossing of the Ocmulgee River at Planters’ Factory, the Seventeenth Corps keeping a little farther east, but reaching the river at the same place. Union General Judson Kilpatrick, with most of the cavalry, was upon this flank and drove the enemy’s skirmishers before him to Lovejoy’s Station. Smith had retired rapidly upon Macon with his infantry, but the old lines at Lovejoy’s Station were held by two brigades of cavalry with two pieces of artillery. Kilpatrick dismounted his men and charged the works on foot, carrying them handsomely. He followed his success with a rapid attack by another column, which captured the guns and followed the retreating enemy some miles toward Macon. The cavalry continued its demonstrations nearly to Forsyth, creating the impression of an advance in force in that direction; then it turned eastward and crossed the Ocmulgee River with the infantry.