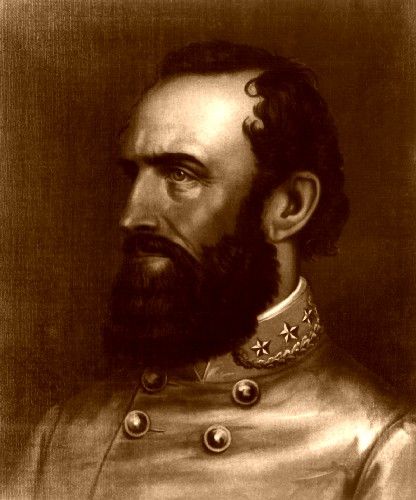 While Stonewall Jackson was buried in his hometown of Lexington, Virginia, his amputated left arm remained in a burial plot of its own, 100 miles to the east, just beyond the Chancellorsville battlefield, where it had been laid to rest on May 3 by Reverend Beverly Tucker Lacy.

Lacy had come that day to visit Jackson as soon as he had heard about the general’s wounding. When he arrived at the field hospital, he broke into tears when he saw the extent of Jackson’s injury. “Oh, General, what a calamity,” he cried.

Lacy and Jackson had formed a close bond during their six months of service together. The two had known each other in Lexington before the war, although for the four years prior to the conflict, Lacy had been the pastor for the Presbyterian congregation in Frankfort, Kentucky. In 1862, he had moved to Fredericksburg, then to Orange Court House, where he served wounded soldiers. In January of 1863, Jackson asked Lacy to oversee the chaplain service of the entire Second Corps.

Lacy was ideally suited for the position. Born in 1819 to a clergyman father in Prince Edward County, Virginia, Lacy eventually went on to Washington College and Union Theological Society. Mary Anna called him a true “spiritual comforter.”

But on the morning of May 3, it was Jackson providing the comfort, meager as it was in his weakened condition. He consoled his friend, and when the time finally came for Lacy to depart, they parted on an optimistic note. Lacy would spend a great deal of time with Jackson over the next seven days, and he would serve as the principal messenger bringing communications from Lee. It would be Lacy to whom Lee would say, “He has lost his left arm, but I have lost my right.”

As it happened, that left arm was much on Lacy’s mind. He found it wrapped in a cloth outside Jackson’s tent, where the doctors had placed it following the operation. Worried that it would end up as one of many on a pile of amputated limbs eventually destined for a mass, unmarked grave, and convinced that it deserved a better fate, Lacy collected Jackson’s arm and determined to dispose of it in a more fitting manner. 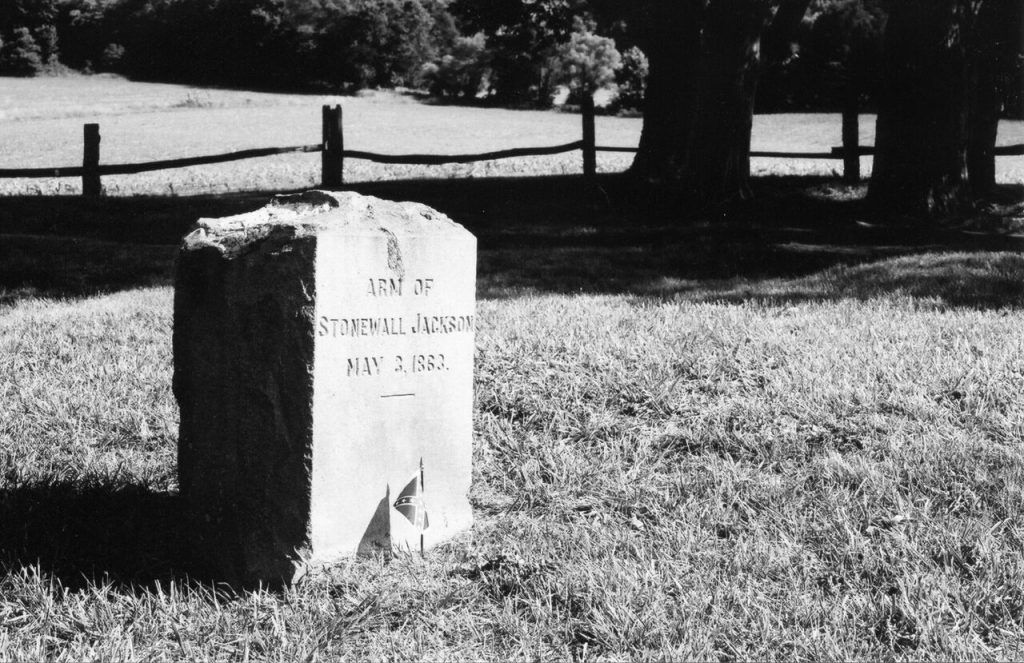 Fifteen people, most of them members of Lacy’s family, rest in peace in the family cemetery, but only Jackson’s arm has a marker. The marker for Jackson’s arm was one of ten such markers erected in the area by James Power Smith.

Lacy set out northeast across the fields toward the nearby home of his brother, J. Horace Lacy. Lacy’s home, called Ellwood, had been built around 1790. Lacy assumed ownership in 1848 when he married the daughter of the building’s original owner. The plantation grew corn, wheat, and oats, tended by several dozen slaves. However, the Lacys primarily used Ellwood as a summer home; they also owned a larger home in Fredericksburg, Chatham, which overlooked the Rappahannock River.

Later, Mary Anna was asked if she wanted the arm exhumed and buried with her husband in Lexington. “Was it given a Christian burial?” she asked. Assured that it was, she consented to let the arm remain at Ellwood.

Not that the arm necessarily rested in peace. When Union forces occupied the area in May of 1864, they dug up the arm and, satisfied that it was really there, reburied it.

A Union engineer, Wesley Brainerd of New York, also took a moment amidst the cacophony of battle sometime on May 7 to visit the spot, mistakenly believing Jackson himself was buried there, not just the arm. In his journal, he wrote: 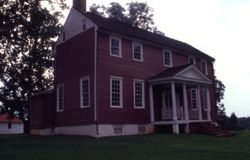 “I was much interested and impressed on approaching a common-looking farmhouse situated in an opening in the woods, to learn that Stonewall Jackson was buried nearby.

His grave was situated in the heart of the Wilderness on a knoll, unmarked by stone or board. It was hard to realize, as I stood beside that lonely grave, that the little mound of earth before me hid from view all that was mortal of the man whose great deeds had filled the world with wonder and amazement . . . . I lingered for a long time at the grave of that wonderful and eccentric man.

Nor could I leave the spot without having experienced those peculiar feelings of awe and respect for the memory of the genius which, though that of an enemy, possessed the faculty which inspired his Soldiers with a religious enthusiasm, resulting in most wonderful victories and made his name a terror to ourselves.” 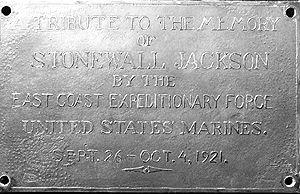 The plaque installed by the Marines eventually fell off and now belongs to the National Park Service’s curatorial collection.

Popular legend also has it that United States Marine Corps General Smedley Butler, in the area for a Marine Corps exercise in 1921, excavated the arm and then reburied it in a metal ammunition box with full military honors. That story, which has taken on a life of its own, probably never happened. The Marines did, however, place a plaque on the side of the arm’s monument: “A Tribute to the Memory of Stonewall Jackson by the East Coast Expeditionary Force: United States Marines Sept. 26-Oct. 4, 1921.”

The monument itself was placed there by an intimate of Jackson’s who sought to preserve the general’s memory: James Powers Smith.

After the war, Smith had married Agnes Lacy, Horace’s oldest daughter, and went on to a successful career as a Presbyterian minister for a church on the corner of Princess Anne and George streets in Fredericksburg. Smith always kept an eye on the grave of his beloved commander’s arm. In 1903, as one of ten granite markers Smith placed around the area’s battlefields, he installed the marker at the cemetery. It reads, “Stonewall Jackson’s arm—Buried May 3, 1863.” Fifteen members of the Lacy family lie interred in the cemetery, but only Jackson’s arm has a marker.

Still, Stonewall Jackson’s arm is not the only limb in United States military history with its own unique story. Major General Benedict Arnold, who would go down in U.S. history as a notorious turncoat for switching his allegiance to the British during the American Revolution, has a monument for a lost limb. At the 1777 battle of Saratoga, while still serving the American cause, Arnold led a brilliant charge against a British position, but British musket balls tore apart his left leg, which was then crushed under his fallen horse. The monument, erected in 1887 near Freeman’s Farm, depicts a bas-relief boot, but the monument’s inscription refers only to the memory of “the most brilliant soldier” in the army without naming Arnold by name because of his subsequent infamy.

During the Mexican War, at the battle of Cerro Gordo, the 4th Illinois Infantry captured the cork leg of Mexican General Antonio Lopez de Santa Anna. The Illinois National Guard has kept the leg as a trophy, displaying it at its museum in Springfield. 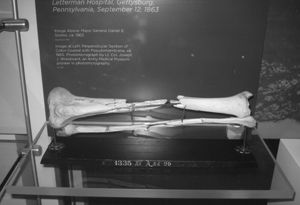 Another leg, this one belonging to flamboyant Union officer and politician Major General Daniel E. Sickles, remains in possession of the Army Medical Museum in Washington, D.C. Sickles lost his left leg in the Peach Orchard on the second day of the battle of Gettysburg. In a show of bravado as he was being carried off the battlefield, Sickles smoked a cigar and ordered that his dismembered leg be saved. He later sent it to the museum, which pickled it and put it on display. Sickles would visit his leg at least once a year for the rest of his life.

This excerpt from The Last Days of Stonewall Jackson re-printed with permission from Savas Beatie LLC.

Chris Mackowski is a professor in the School of Journalism and Mass Communication at St. Bonaventure University in Allegany, New York. He also works as a historian with the National Park Service at Fredericksburg & Spotsylvania National Military Park, where he gives tours at four major Civil War battlefields (Fredericksburg, Chancellorsville, Wilderness, and Spotsylvania), as well as at the building where Stonewall Jackson died. He’s the author of books on the battles of Chancellorsville and the Wilderness, and his writing has appeared in several national magazines. He blogs regularly for Scholars and Rogues.

Mackowski and White are longtime friends and have co-authored several books together, including The Last Days of Stonewall Jackson and Simply Murder: The Battle of Fredericksburg, along with monograph-length articles on the battle of Spotsylvania for Blue & Gray. They have also written for Civil War Times, America’s Civil War, and Hallowed Ground. They are co-founders of the blog Emerging Civil War.

Kristopher D. White is a historian for the Penn-Trafford Recreation Board and a continuing education instructor for the Community College of Allegheny County near Pittsburgh, Pennsylvania. He served for five years as a staff military historian at Fredericksburg & Spotsylvania National Military Park and is a former Licensed Battlefield Guide at Gettysburg. Kristopher holds a Master of Arts degree in Military History from Norwich University.