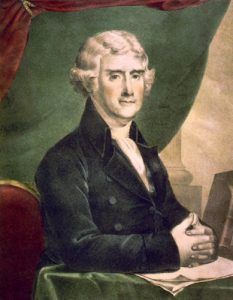 The policy of the American government is to leave their citizens free, neither restraining nor aiding them in their pursuits.

On the 13th of April, 1743, in a farmhouse among the mountains of Central Virginia, a male child was born who was destined to stamp his genius and personality upon the future nation. The father was a backwoods surveyor of Welsh origin and a giant in stature and strength. His name was Peter Jefferson, and he called his boy Thomas.

Peter Jefferson was the owner of thirty slaves and of a wheat and tobacco farm of nearly 2,000 acres. He was a stern man, though kind and just. One of his favorite sayings was, “Never ask another to do for you what you can do yourself.” He died when Thomas was but 14 years old and was ever remembered by his son with pride and veneration.

From the very first, young Thomas was an especially bright child. He inherited his mother’s gentle, thoughtful disposition and her love for music and nature. He also took naturally to books and studious pursuits. He might have been over studious, but his love of nature made him a keen hunter, a fine horseman, and as fond as George Washington of outdoor sports.

There were ten children in the Jefferson home. Young Thomas was the third. He had a great affection for his elder sister, Jane. The two were always together and she did much toward elevating and ennobling his character. Her early death, at the age of just 25, was regretted by Jefferson to the end of his long life.

Young Jefferson entered William and Mary College when he was seventeen. He was described as one of the “gawkiest” students of the session, but professors and students alike soon found out his worth. Dr. Small, a Scottish professor of mathematics, was particularly attracted to him and exercised a great and beneficial influence over his character.

Among Jefferson’s early companions was a jovial young fellow noted for “mimicry, practical jokes, fiddling, and dancing.” His name, like Jefferson’s, has since been written indelibly upon the country’s history. Every schoolboy and girl knows it. It was Patrick Henry. The two were boon companions in their youthful sports.

Shortly after Jefferson entered college, Patrick Henry strolled into his room one day and delighted him with the news that he had been studying law since they parted and that he had come to Williamsburg to get a license to practice. Jefferson questioned him eagerly. When he found that the young man had, in reality, studied law only about six weeks, he was doubtful of the outcome; but, needless to say, young Henry secured his license. 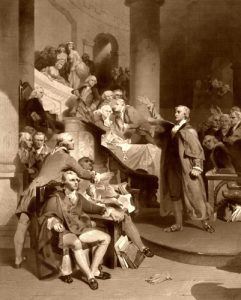 Patrick Henry before the Virginia House of Burgesses

Some time afterward, when Jefferson was himself a law student and young Henry was a member of the House of Burgesses, which met at Williamsburg, matters between the King and the colonies were brought to a straitened pass by the issue of the Stamp Act.

Henry felt at once that it was time to rebel, and prepared his famous set of Five Resolutions, and went to the assembly chamber primed for the occasion. It is possible that he gave his young friend, whose guest he was, a hint of what he intended to do. At any rate, young Jefferson watched him intently. Suddenly he saw his friend draw himself to his full height and “sweep with a conqueror’s gaze the entire audience before and about him.” Then, in a voice rich and full and musical, he poured out his impassioned plea for the liberties of the people. In the midst of it, his voice suddenly rang out in electric tones:

“Caesar had his Brutus, Charles the First his Cromwell and George the Third–” He paused. The house was in an uproar. The Speaker and many of the members were upon their feet shouting, “Treason! Treason!” They thought that he was going to threaten the overthrow of George III, who was King of England and of the colonies. But young Henry did not flinch. He looked the Speaker squarely in the eye, and, with a superb gesture, added in a tone which thrilled all hearers, “May profit by their example. If that be treason, make the most of it.”

Young Jefferson never forgot the scene. He listened enthusiastically to the heated debate which followed. The “torrents of sublime eloquence” which fell from the lips of Patrick Henry almost took his breath away, and a well-spring of patriotism bubbled into being in his strong young heart. He resolved that he, too, would strive to serve his country, and to this end redoubled his studious efforts, sometimes spending fifteen hours a day over his books. The result was that he soon became the most accomplished scholar in America. He excelled in mathematics and was acquainted with five languages besides his own. 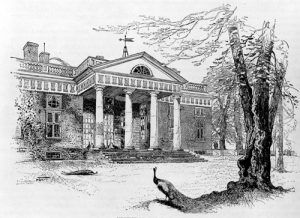 But, first and foremost, Jefferson was a farmer. He once said: “No occupation is so delightful to me as the culture of the earth, and no culture comparable to that of the garden.”

He celebrated the occasion of his coming of age by planting a beautiful avenue of trees near his house, which he had built upon a high hill and given the name of “Monticello,” meaning “little mountain.” He delighted in trying new things and imported a large number of trees and shrubs to beautify his grounds, which were marvelous indeed.

We are told that “his interests were wide and intense,” but in nothing, perhaps, did he display a more unfaltering zeal than in the cause of education. In his epitaph, which he wrote himself, Jefferson makes no mention of his having been Governor of Virginia, Minister to France, Secretary of State, Vice-President, and President of the United States. Instead, there is a modest mention of the three things which he considered had won him his most enduring title to fame, viz.: that he was the “Author of the Declaration of Independence; of the statute of Virginia for Religious Freedom, and Father of the University of Virginia.”

All of these had freedom for their core. “Free government; free faith; free thought,” says Ellis, in his biography–“these were the treasures which Thomas  Jefferson bequeathed to his country and his State; and who, it may well be asked, has ever left a nobler legacy to mankind?”

Jefferson was a member of the convention which met in Richmond in March 1775, to decide what part Virginia should take in the coming war. He fully endorsed the words of his friend, Henry, when that “Demosthenes of the woods” electrified his hearers with the thrilling cry: “Gentlemen may cry,’ Peace, peace!’ but there is no peace! The war has actually begun! The next gale that sweeps from the North will bring to our ears the clash of resounding arms! Our brethren are already in the field. Why stand we here idle? What is it the gentlemen wish? What would they have? Is life so dear or peace so sweet as to be purchased at the price of chains and slavery? Forbid it, Almighty God! I know not what course others may take, but as for me, give me liberty or give me death!”

When George Washington was elected commander-in-chief, Jefferson took the place which he vacated in Congress. He was at once recognized as an influential member. No one was better than he on committees. He was so prompt, frank, and decisive. Again, no one had a clearer insight into a situation or understood his countrymen better. He was sagacious, wise, and prudent; by birth an aristocrat, but, by nature, a democrat. He cared very little for pomp and ceremony and despised titles and the insignia of rank. He could not make a brilliant speech, but in his hand the pen waxed mighty indeed.