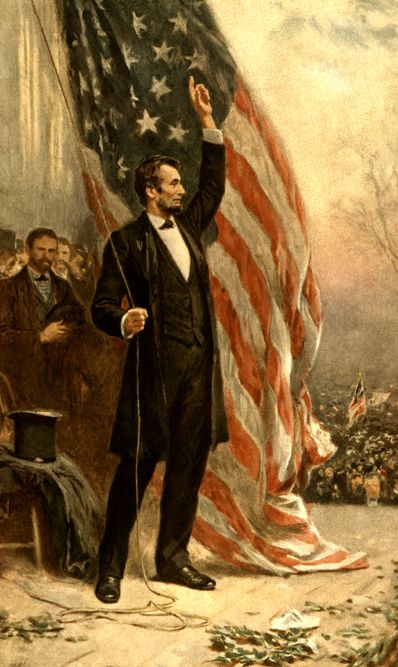 O captain. My captain. Our fearful trip is done;
The ship has weathered every rack, the prize we sought is won;
The port is near, the bells I hear, the people all exulting,
While follow eyes the steady keel, the vessel grim and daring:
But O heart! Heart! Heart!
Leave you not the little spot,
Where on the deck my captain lies,
Fallen cold and dead.

O captain. My captain. Rise up and hear the bells;
Rise up–for you the flag is flung–for you the bugle trills;
For you bouquets and ribbon’d wreaths–for you the shores a-crowding;
For you they call, the swaying mass, their eager faces turning; O captain. Dear father.
This arm I push beneath you;
It is some dream that on the deck,
You’ve fallen cold and dead.

My captain does not answer, his lips are pale and still;
My father does not feel my arm, he has no pulse nor win:
But the ship, the ship is anchor’d safe, its voyage closed and done;
From fearful trip, the victor ship, comes in with object won:
Exult O shores, and ring, O bells.
But I with silent tread,
Walk the spot the captain lies,
Fallen cold and dead. 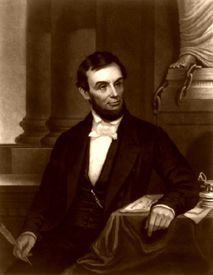 Leaving an enduring legacy in his historic role as savior of the Union and emancipator of the slaves, Abraham Lincoln was the 16th President of the United States, serving from March 1861 until his assassination in April 1865.

Five months before receiving his party’s nomination for President, he sketched his own life, saying:

“I was born on February 12, 1809, in Hardin County, Kentucky. My parents were both born in Virginia, of undistinguished families — second families, perhaps I should say. My mother, who died in my tenth year, was of a family of the name of Hanks. My father removed from Kentucky to Indiana, in my eighth year. It was a wild region, with many bears and other wild animals still in the woods. There I grew up. Of course, when I came of age I did not know much. Still, somehow, I could read, write, and cipher but that was all.”

He was the second child of Thomas Lincoln and Nancy Hanks Lincoln, born in a one-room log cabin on the Sinking Spring Farm in Hardin County, Kentucky (now LaRue County). Though coming from humble beginnings, his father Thomas enjoyed considerable status in Kentucky—where he sat on juries, appraised estates, served on country slave patrols, and guarded prisoners. By the time Abraham was born, Thomas owned two 600-acre farms, several town lots, livestock, and horses. He was among the richest men in the county; however, in 1816, Thomas lost all of his land in court cases because of faulty property titles. 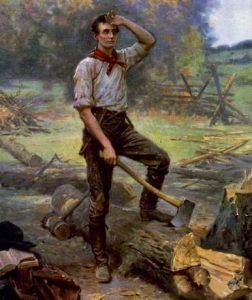 Abraham Lincoln as a Youth

The family then moved north across the Ohio River to Indiana, when Lincoln was nine. His mother died of milk sickness in 1818 and his father remarried the following year. In 1830, fearing a milk sickness outbreak along the Ohio River, the Lincoln family moved west, where they settled in Illinois. At the age of 22, Lincoln struck out on his own, making extraordinary efforts to attain knowledge while working on a farm, splitting rails for fences, and keeping store at New Salem, Illinois. He also held a variety of public positions such as postmaster and county surveyor, while reading voraciously, and teaching himself law. Of his learning method, he would say: “I studied with nobody”. He became an Illinois congressman in 1834 and was admitted to the bar in 1836. He was a captain in the Black Hawk War, spent eight years in the Illinois legislature, and rode the circuit of courts for many years. His law partner said of him, “His ambition was a little engine that knew no rest.” He married Mary Todd on November 4, 1842, and the couple would have four sons, only one of whom lived to maturity.

In 1858 Lincoln ran against Stephen A. Douglas for Senator. He lost the election; but, in debating with Douglas he gained a national reputation that won him the Republican nomination for President in 1860. In his Inaugural Address, he warned the South:

“In your hands, my dissatisfied fellow countrymen, and not in mine, is the momentous issue of civil war. The government will not assail you. You have no oath registered in Heaven to destroy the government, while I shall have the most solemn one to preserve, protect and defend it.”

Lincoln thought secession illegal and was willing to use force to defend Federal law and the Union. When Confederate batteries fired on Fort Sumter, South Carolina and forced its surrender, he called on the states for 75,000 volunteers. As President, he built the Republican Party into a strong national organization. Further, he rallied most of the northern Democrats to the Union cause. On January 1, 1863, he issued the Emancipation Proclamation that declared forever free those slaves within the Confederacy.

Lincoln won re-election in 1864, as Union military triumphs heralded an end to the war. The spirit that guided him was clearly that of his Second Inaugural Address, now inscribed on one wall of the Lincoln Memorial in Washington, D.C.:

“With malice toward none; with charity for all; with firmness in the right, as God gives us to see the right, let us strive on to finish the work we are in; to bind up the nation’s wounds.”

“America will never be destroyed from the outside. If we falter and lose our freedoms, it will be because we destroyed ourselves.”

7 thoughts on “Abraham Lincoln – Standing as a Hero”