Located about 20 miles northwest of Baton Rouge, Port Hudson is known best for a long battle that took place during the Civil War.

In 1833, one of the first railroads in the United States was chartered from Port Hudson to Clinton, Louisiana. It was completed in 1841 and Clinton became a transportation hub for the area. Produce and other products of the region were sent by rail to be transferred to steamboats at Port Hudson.

Port Hudson was situated on an 80 foot bluff on the east bank above a hairpin turn in the Mississippi River. The hills and ridges in the area of the town represented extremely rough terrain, a maze of deep, thickly forested ravines, swamps, and canebrakes giving the effect of a natural fortress. A shipping port for cotton and sugar, the port, and the town became economically important to the area. The town of Fort Hudson was incorporated in 1838, even though it consisted of just a few buildings and about 200 people.

From the time the Civil War started in April 1861, both the North and South made controlling the Mississippi River a major part of their strategy. The Confederacy wanted to keep using the river to transport needed supplies; while the Union wanted to stop this supply route and drive a wedge that would divide Confederate states and territories. Particularly important to the South was the stretch of the Mississippi that included the mouth of the Red River. The Red River was the Confederacy’s primary route for moving vital supplies between east and west: salt, cattle, and horses traveled downstream from the Trans-Mississippi West; in the opposite direction flowed men and munitions from the east.

By 1860, the railroad to Clinton was in a state of deterioration, and bonds were sold in 1860 for a complete reconstruction of the road. It would be two more years before it was complete, and though short, it was very useful in sending eastward the supplies sent down the Red River and the salt from southwestern Louisiana. It also played a major role in getting Port Hudson ready for the siege that paralleled Vicksburg’s. The road was totally destroyed during the siege.

In the spring of 1862, the Union took control of New Orleans and Memphis, Tennessee. To make sure it could continue to use the middle section of the river, the South fortified positions at Vicksburg, Mississippi and Port Hudson, Louisiana. 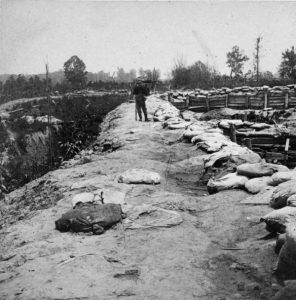 Initial plans for fortifications at Port Hudson were drawn up with the assistance of Captain James Nocquet, chief engineer for General Breckinridge. Along with loaning his engineering staff, Breckinridge also authorized Port Hudson officers to gather needed supplies and tools using the Clinton and Port Hudson Railroad, and whatever labor the area could provide for construction. In August 1862, a line of seven earthwork lunettes (half-moon-shaped spaces) was built and arranged along a 400-yard line fronting the river.

Port Hudson was the site of the longest siege in American history, lasting 48 days when 7,500 Confederates resisted some 40,000 Union soldiers for almost two months during 1863.

In May 1863, in cooperation with Major General Ulysses S. Grant’s offensive against Vicksburg, Union Major General Nathaniel P. Banks’ army moved against the Confederate stronghold at Port Hudson. Three Union divisions came down the Red River to assail Port Hudson from the north, while two others advanced from Baton Rouge and New Orleans to strike from the east and south. By May 22, 1863, 30,000 Union soldiers had isolated 7,500 Confederates behind 4 ½ miles of earthen fortifications. On May 26th Banks issued orders for a simultaneous attack all along the Confederate perimeter the following morning. 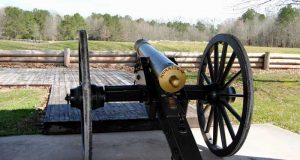 The first Union assault fell on the Confederate left wing, which guarded the northern approaches to Port Hudson. Timely reinforcements from the center allowed the Confederates to repulse several assaults. The fighting ended on the left wing before the remaining two Union divisions advanced against the Confederate center. Here, the Confederates repulsed the Federal advance across Slaughter’s Field, killing approximately 2,000 Union soldiers. Union casualties included 600 African-Americans of the First and Third Louisiana Native Guards. Free blacks from New Orleans composed a majority of the First Louisiana Native Guards, including the line officers. Former slaves commanded by white officers composed the Third Louisiana Native Guards. Led by Captain Andre Cailloux, a black officer, the two regiments made their advance on the extreme right of the Union line. Captain Cailloux was shot down as he shouted orders in both French and English.

Another attempt to take Port Hudson failed on June 13, when the Confederates inflicted 1,805 casualties on the Union troops while losing fewer than 200. 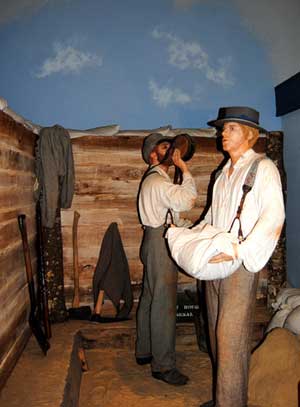 The Confederates held out until they learned of the surrender of Vicksburg. Without its upriver counterpart, Port Hudson, the last Confederate bastion on the Mississippi River, lacked strategic significance and the garrison surrendered on July 9, 1863. The siege lasted for 48 days, one of the longest sieges in American military history. In the end, the Union suffered an estimated 5,000 casualties and the Confederate – 7,208.

Today, the Port Hudson State Commemorative Area encompasses 889 acres of the northern portion of the battlefield and has three observation towers, six miles of trails, a museum, a picnic area, and restrooms. Four thousand Civil War veterans are buried at the Port Hudson National Cemetery, which stands just outside the old Confederate lines.

With these two victories, the North could finally claim undisputed control of the Mississippi River. Though the Civil War would rage on for almost two more years, the siege at Port Hudson, and the battles of Vicksburg and Gettysburg–which all occurred the same week–together struck a blow from which the South never recovered.