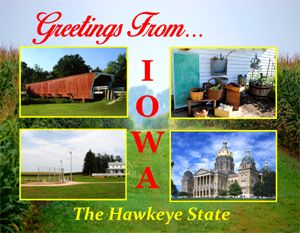 The first known peoples on what is now Iowa soil were the Clovis people up to 13,000 years ago. Other cultures who have lived here include the Mound Builders and several Native American Tribes.  When North America was discovered by Europeans, the land was claimed by various European nations until it was absorbed by the United States, became a territory, and in 1846, the 29th state to join the Union.

After the Civil War was over, Iowa’s population continued to grow dramatically, almost doubling from 1860 to 1870. The introduction of railroads in the 1850s and 1860s transformed Iowa into a major agricultural producer.

However, agriculture would not be enough to maintain Iowa’s economy in the long term, and in the early 20th century, the state began to change, increasing its manufacturing and service businesses.

Today, Iowa continues to support its more than three million residents with a strong agricultural environment, as well as manufacturing, biotechnology, finance, insurance, and service businesses. The Omaha, Ho-Chunk, and Meskwaki (Sac and Fox)  peoples continue to have reservations in the state.

While visiting Iowa say hello and give a wave to these fine folks as you follow Iowa’s National Scenic Byways along the shorelines of the mighty Mississippi River and over the hills above the Missouri River Plains. Trace the footsteps of Lewis & Clark, Buffalo Bill Cody, andNative Americans. Stop at some of the Hawkeye State’s best attractions including the Bridges of Madison County, Amana Colony, the Field of Dreams, and take a ride along the Boone & Scenic Valley Railroad.

Iowa State Flag – Iowa was almost 75 years old before the state flag was adopted by the Legislature in 1921. It was designed by the state’s Daughters of the American Revolution in response to Iowa National Guardsmen stationed at the Mexican border during WWI that requested an emblem of Iowa to represent their unit.

The flag consists of three vertical stripes: the blue stripe stands for loyalty, justice and truth; the white stripe for purity; and the red stripe for courage. On the white center, an eagle carries streamers in its beak which are inscribed with the state’s motto: “Our liberties we prize and our rights we will maintain.” The word Iowa is in red below the streamers.

Alexander MacGregor & The Historic Rivertowns of McGregor and Marquette

The Ioway Tribe – People of Iowa

Present at a Hanging

Villisca and the Axe-Murder Man 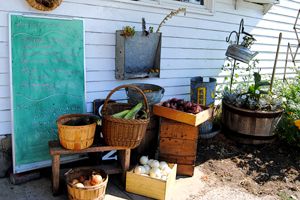 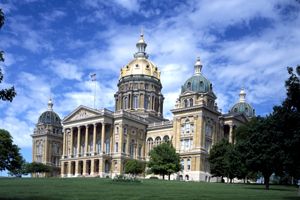 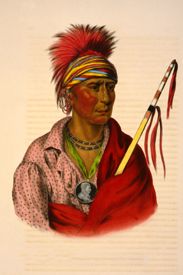