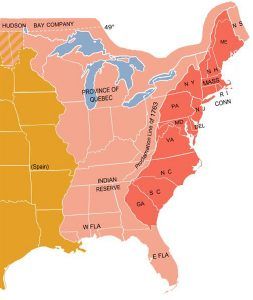 The Thirteen American Colonies, founded in the 17th and 18th centuries, were a group of British colonies on the Atlantic coast of North America. These early colonies eventually formed the United States of America.

European nations came to the Americas to increase their wealth and broaden their influence over world affairs. The Spanish were among the first to explore the New World and the first to settle in what is now the United States. Other nations were also exploring and claiming land along the Atlantic coastline, including France, Sweden, Holland, and England at the beginning of the 17th century. The struggle for control of this land would continue for more than a hundred years. 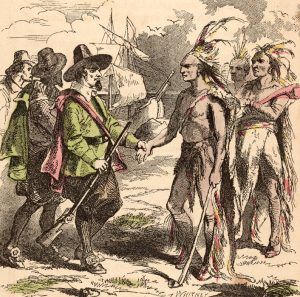 The first colony was founded at Jamestown, Virginia, in 1607. Many of the people who settled in the New World came to escape religious persecution. The Pilgrims, founders of Plymouth, Massachusetts, arrived in 1620. In both Virginia and Massachusetts, the colonists flourished with some assistance from Native Americans. New World grains such as corn kept the colonists from starving while, in Virginia, tobacco provided a valuable cash crop.

The Thirteen Colonies had very similar political, constitutional, and legal systems and were dominated by Protestant English-speakers. They were part of Britain’s possessions in the New World, which also included colonies in Canada, the Caribbean, and Florida. There were three forms of colonial government in the colonies including were provincial, also called a royal colony; proprietary, and charter. 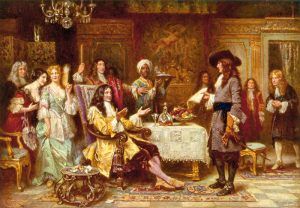 Provincial colonies were governed by commissions created by the Crown of England. A governor, who was authorized with executive powers, and his council were appointed by the King. This type of government also utilized assemblies that were made up of representatives elected by landowners of the province. The assembly’s role was to make all local laws and ordinances, ensuring that they were consistent with the laws of England. The governor’s council sat as an upper house when the assembly was in session, in addition to its role in advising the governor. The governor had the power of absolute veto and could delay or dissolve the assembly.

Proprietary colonies were governed much as royal colonies, except that lord proprietors were appointed the governor rather than the king. They were set up after 1660 and typically enjoyed greater civil and religious liberty. 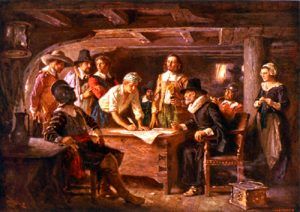 Charter governments were political corporations who, with the blessing of the Crown, were given control of the land and the powers of legislative government. The charters provided a fundamental constitution and divided powers among legislative, executive, and judicial functions, under English rules. At any time, the crown might revoke a charter and convert the colony into a crown colony.

These governments were all subordinate to the King of England with no representation in the Parliament of Great Britain.

France, England, and other countries made several attempts to colonize New England early in the 17th century, and those nations were often in contention for lands in the area. The geography and climate impacted the trade and economic activities of New England Colonies. Along the coast, the earliest communities were fishing villages, but by the end of the 17th century, New England colonists had created an Atlantic trade network and were involved in fur trading, lumbering, shipbuilding and other industries including the manufacture and export of rum. The rocky soil in the New England Colonies was not very fertile but farming communities were established on the more fertile land along the rivers where corn, pumpkins, rye, squash, and beans were planted. The religion practiced in New England in these early was strictly Puritan and other religions were not tolerated. 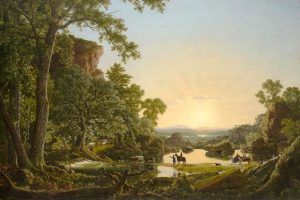 Thomas Hooker and settlers journeying through the wilderness to Connecticut by Frederic E. Church, 1846.

Connecticut Colony – Originally known as the Connecticut River Colony or simply the River Colony, Dutch traders established a permanent settlement near Hartford as early as 1633. Not long afterward, English settlers began to arrive in the area from Massachusetts. In 1636, after being driven from Massachusetts, Clergyman Thomas Hooker and his followers arrived in the Connecticut River Valley and declared religious freedom. In 1639, three settlements, including Hartford, Saybrook, and New Haven, joined to form a unified government creating a document called the Fundamental Orders of Connecticut, the first written constitution in America. King Charles II officially united Connecticut as a single Charter Colony in 1662. In 1788 Connecticut was the fifth state to ratify the Constitution. 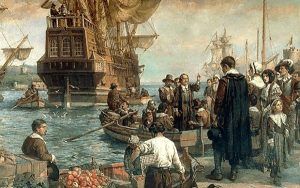 Province of Massachusetts Bay – The Pilgrims were the first English colonists to permanently settle in present-day Massachusetts after setting out from Plymouth, England on the Mayflower in September 1620. Before the 102 passengers decided on their permanent location, they gathered together and the men signed an agreement called the “Mayflower Compact” on November 21, 1620, that would set the rules to guide them through the early days of establishing a new community. This agreement would serve as the official Constitution of the Plymouth Colony for many years. After exploring the area for nearly a month, by foot and in boats, they decided on a location which they named Plymouth on December 21, 1620. More Puritans arrived in Massachusetts over the next decade, settling in the Salem area, and Boston was founded in 1630. Massachusetts began as a Charter Colony and in 1652 Maine was annexed to Massachusetts. In 1691, the Plymouth Colony was absorbed into the Massachusetts Bay Colony to form the Province of Massachusetts Bay, at which time it became a Royal Colony. In 1788 Massachusetts was the sixth state to ratify the Constitution. 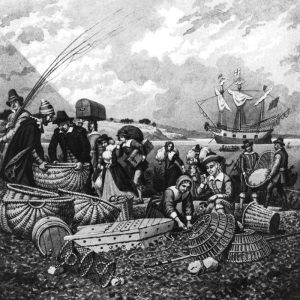 Province of New Hampshire – In 1623 two groups of English settlers, sent by Captain John Mason, arrived present-day New Hampshire. The colony was named for John Mason’s home in the County of Hampshire, England. These first settlers established a fishing village near the mouth of the Piscataqua River. In 1638, John Wheelwright, banished from Boston, Massachusetts for defending his sister-in-law Anne Hutchinson, founded a settlement called Exeter in New Hampshire. In 1639 the settlers signed the “Exeter Compact” patterned after the “Mayflower Compact”. Though New Hampshire started out as a Proprietary colony, it became a Royal colony in 1679. Throughout the colonial period, the New Hampshire Colony sometimes came under Massachusetts jurisdiction. In 1776 the province established an independent state and government and joined with the other 12 colonies to form the United States. In 1788, New Hampshire was the ninth state to ratify the Constitution after which it was officially adopted.

Colony of Rhode Island and Providence Plantations – A few Europeans began to settle what would become Rhode Island as early as 1620, but the first permanent settlement wasn’t established until 1636. In 1635 Roger Williams, a Puritan theologian was driven from Salem, Massachusetts for espousing religious and political freedom. After spending the winter with Narragansett Indians, he bought land from them and settled in the area of present-day Providence. The new colony became a haven for those seeking religious freedom. In 1638, Anne Hutchinson, Puritan spiritual adviser who was also banned from Massachusetts, helped found Portsmouth. Rhode Island and Providence Plantations officially became a charter colony in 1663. Among other unique guarantees, the Charter established complete religious freedom in Rhode Island, which was unusual at the time, and later formed the basis for similar provisions in the U.S. Constitution. Although Rhode Island was one of the first colonies to embrace autonomy from the British and espouse Revolutionary ideals, it was the last of the 13 colonies to ratify the Federal Constitution and became a State in 1790.