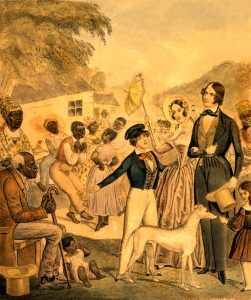 “In every human Breast, God has implanted a Principle, which we call Love of Freedom; it is impatient of oppression, and pants for Deliverance. … The same Principle lives in us.”

Evidence of slavery predates written records and is thought to have begun sometime after the invention of agriculture about 11,000 years ago. Slavery existed in almost every ancient civilization including Egypt, China, India, Greece, the Roman Empire, and the pre-Columbian civilizations of the Americas. These slavery practices were a mixture of debt-slavery, punishment for crime, the enslavement of prisoners of war, child abandonment, and the birth of slave children to slaves.

In Europe, slavery existed from Classical times and did not decline until the collapse of the Roman Empire. Slavery remained in Europe throughout the early medieval period, but, became increasingly uncommon in Northern Europe and by the 11th and 12th centuries, had been effectively abolished in the North. In Southern and Eastern Europe, slavery remained a normal part of the society and economy and trade across the Mediterranean and the Atlantic seaboard meant that African slaves began to appear in Italy, Spain, Southern France, and Portugal well before the discovery of the New World.

From about the 8th century onwards, an Arab-run slave trade also flourished. In addition, many African societies, themselves, had forms of slavery.

1441 – Start of European slave trading in Africa. The Portuguese captains Antao Gonçalves and Nuno Tristao capture 12 Africans in Cabo Branco (modern Mauritania) and take them to Portugal as slaves. 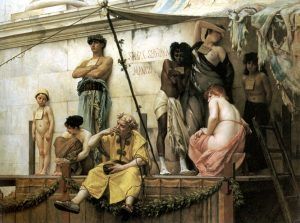 1472 – The Portuguese negotiate the first slave trade agreement that also includes gold and ivory. By the end of the 19th Century, because of the slave trade, five times as many Africans (over 11 million) would arrive in the Americas than Europeans.

1494 – The first Africans arrive in Hispaniola with Christopher Columbus. They are free persons.

1503 -Spanish and Portuguese bring African slaves to the Caribbean and Central America to replace Native Americans in the gold mines.

1585 -The first English colony in what will become the United States is established at Roanoke Island, North Carolina.

1619 – A Dutch ship transports 20 Africans to Jamestown, Virginia. Initially, they appear to have been indentured servants; but, the institution of hereditary lifetime service for enslaved African-Americans soon develops.

An estimated 1-1.25 million Europeans were captured by Barbary pirates and sold as slaves in North Africa and the Ottoman Empire between the 16th and 19th centuries.

The Africans called the trip across the Atlantic Ocean “Middle Passage.”

Dutch ship landing in Virginia with African Americans in 1619.

1651 – Rhode Island declares an enslaved person must be freed after 10 years of service.

1660s –The practice of slavery becomes a legally recognized institution in British America. Colonial assemblies begin to enact laws known as slave codes, which restrict the liberty of slaves and protect the institution of slavery. 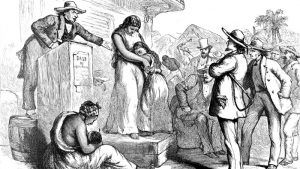 1663 – A Virginia court decides a child born to an enslaved mother is also a slave.

1672 -The King of England charters the Royal African Company, thereby encouraging the expansion of the British slave trade.

1676 -Nathaniel Bacon (Bacon’s Rebellion) appeals to enslaved blacks to join in his cause. 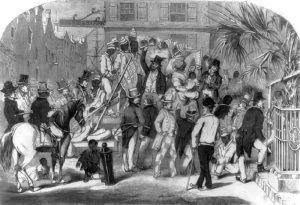 1750 – Georgia is the last of the British North American colonies to legalize slavery. 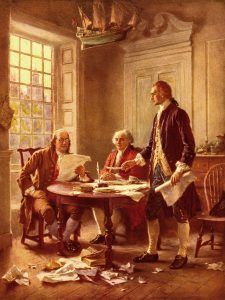 1776 – Delegates to Continental Congress in Philadelphia adopted the Declaration of Independence, which declares that “All men are created equal.” However, slavery remains a legal institution in all 13 of the newly-established states.

1777 – Vermont amends its constitution to ban slavery. Over the next 25 years, other Northern states emancipate their slaves and ban the institution. Some of the state laws stipulate gradual emancipation. 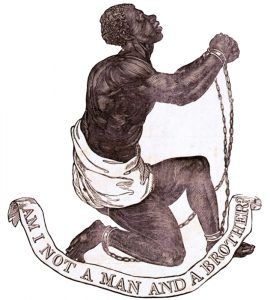 1787 – Slavery is made illegal in the Northwest Territory, which will eventually become the states of Ohio, Indiana, Illinois, Michigan, and Wisconsin.

The United States draft the U.S. Constitution, which forbids Congress from interfering with the slave trade before 1808. Enslaved persons are counted as three-fifths of a person for the census.

Prior to the arrival of European slave traders in Africa, slavery had long been a part of life on the continent. The Arab slave trade from East Africa is one of the oldest slave trades, predating the European transatlantic slave trade by 700 years. 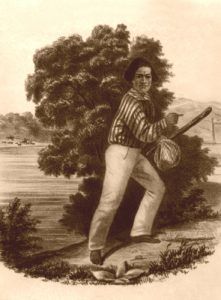 1793 – U.S. Congress enacts the Fugitive Slave Act to protect the rights of slave owners to retrieve runaways across state lines.

1800 – Gabriel Prosser, an enslaved African American blacksmith, organizes a slave revolt intending to march on Richmond, Virginia. The conspiracy is uncovered, and Prosser and a number of the rebels are hanged. Virginia’s slave laws are consequently tightened.

1807 – British Parliament votes to abolish the trade in slaves.

1808 – In 1807 Congress bans the importation of slaves, effective January 1, 1808. The internal slave trade continues in states where the institution is legal. 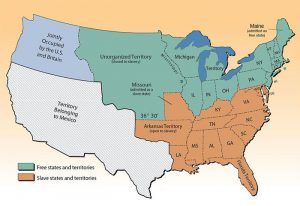 1820-1821 – In the Missouri Compromise, Congress admits the slave state of Missouri and the free state of Maine into the Union and bans slavery north of the 36° 30′ line of latitude in the Louisiana Territory.

1822 – Denmark Vesey, an enslaved African American carpenter who had purchased his freedom, plans a slave revolt with the intent to lay siege on Charleston, South Carolina. The plot is discovered, and Vesey and 34 co-conspirators are hanged. 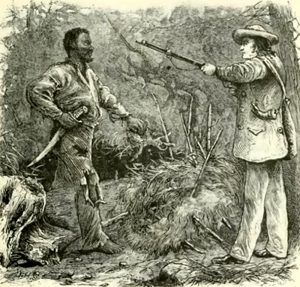 1831 – In Boston, Massachusetts, William Lloyd Garrison founded an abolitionist newspaper, The Liberator, signaling a dramatic shift in the anti-slavery movement. The abolitionist movement soon becomes the dominant voice among anti-slavery advocates, who demand the immediate end to slavery.

Nat Turner, a literate slave who preacher, instigates a slave revolt in Southampton County, Virginia. He and his followers kill 57 whites, but the revolt is unsuccessful and up to 200 slaves are killed. Afterward, the Virginia legislature narrowly rejects a bill to emancipate Virginia’s slaves. The widespread fear of slave revolts, compounded by the rise of abolitionism, leads legislatures across the South to increase the harshness of their slave codes.