Though the city of Los Angeles, California, is the second-largest metropolitan area in the United States, at almost 18 million souls, it is a relatively young city, not founded until the mid-nineteenth century.

The area was first inhabited by several Indian tribes, including the Tongva, Cahuilla, Kumeyaay, and Chumash, who were active in fine boatbuilding. The first explorer known to the area was Juan Cabrillo, who stopped at present-day San Pedro in 1542, greeted by Tongvan men, who rowed out to meet his ship. The explorer died later that year while wintering at Santa Catalina Island, and no white face was seen again locally for 227 years.

The Spanish conquest of Mexico reached the area in 1769, and in 1771 they founded the Mission San Gabriel Archangel, one of eight missions established by the Franciscans in Southern California.

For years, history has told that on September 4, 1781, 44 “pobladores” who were recruited from northern Mexico to help cement Spain’s control over Alta, California (Upper California), established the settlement. Only two of these settlers identified as Spaniards; the rest came primarily of African or Indian descent. However, over the past few decades, scholars have uncovered that the pobladores arrived separately, some as early as that June. (September 4 remains the traditional celebrated anniversary).

The small town received the name El Pueblo de Nuestra Señora Reina de los Ángeles de la Porciuncula, “The Town of Our Lady Queen of the Angels.” Located on the Los Angeles River, the settlement became a cattle ranching center. The oldest house in Los Angeles County was built in 1795 on what became the Rancho San Antonio. It is now known as the Henry Gage Mansion and is in Bell Gardens. 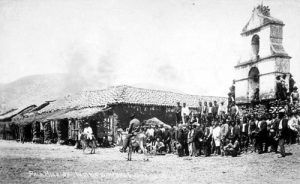 At the time of the arrival of Spanish missionaries, there were an estimated 5,000 Tongvan Indians living in 31 known village sites.  In common with other California tribes in the mission system, the Tongva allowed the missionaries to convert and civilize them. Native religious and hunter-gatherer practices were redirected into Roman Catholicism and agriculture. Though destructive of their culture, the mission system valued the individual Native Americans and employed them on the mission farms and ranches. When the missions were disbanded, the natives were thrown back on their own much-reduced resources. The Tongva tribe still exists, with perhaps a few thousand members but no reservation.

Mexico’s independence from Spain in 1821 did not change life in Los Angeles, other than to allow the secularization of the missions, where land grants distributed the mission properties to rancheros.

In 1842 a shepherd discovered gold in Placerita Canyon, just outside the current city limits, and sparked a minor gold rush. In subsequent decades mining became an important industry, employing hard rock and placer techniques. The local mountains are still riddled with abandoned mines, and hopeful prospectors still pan for gold in the San Gabriel River.

Manifest Destiny reached California at the time of the Mexican-American War (1846 – 1848). On June 18, 1846, a small group of Yankees raised the California Bear Flag and declared independence from Mexico. United States troops quickly took control of the presidios at Monterey and San Francisco and proclaimed the conquest complete.

In Southern California, the Mexicans for a time repelled American troops, but Los Angeles eventually fell to Lieutenant Colonel John C. Fremont. The United States and Mexico signed the Treaty of Capitulation at Cahuenga Pass on January 13, 1847.

April 4, 1850, saw the incorporation of Los Angeles as a city. At the same time, the old landowners started to lose their lands. Compelled to secure confirmation of their land grants in U.S. courts, ten percent of the bona fide landowners of Los Angeles County had to move off their land and were reduced to bankruptcy. 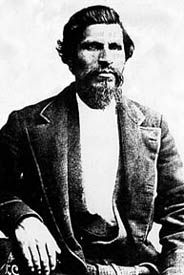 Other Mexican residents resisted the new Anglo powers by resorting to social banditry against the gringos. In 1856 Juan Flores threatened Southern California with a full-scale Mexican revolt. He was hanged in Los Angeles in front of 3,000 spectators. Tiburcio Vasquez, a legend in his own time among the Mexican population for his daring feats against the Anglos, was captured in what is believed to be present-day West Hollywood. The bandit was found guilty of two counts of murder by a San Jose jury trial in 1874 and was hanged in that location in 1875.

The thriving Chinatown was the site of terrible violence in 1871. A Tong war between rival gangs resulted in the accidental death of a white man. This enraged the white populace, and a mob of 500 men descended on Chinatown. They killed 19 men and boys, only one of whom had been involved in the original killing, as well as a white man who tried to protect them. Homes and businesses were looted. A grand jury investigation followed, but only one man ever served prison time.

In the 1870s, Los Angeles was still little more than a village of 5,000. By 1900 there were over 100,000 occupants of the city. Several men actively promoted Los Angeles, working to develop it into a great city and to make themselves rich. Angelenos set out to remake their geography in order to challenge San Francisco with its port facilities, railway terminal, banks, and factories. 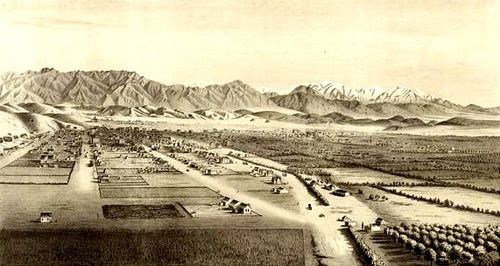 Phineas Banning excavated a channel out of the mudflats of San Pedro Bay leading to Wilmington in 1871. Banning had already laid track and shipped in locomotives to connect the port to the city. Harrison Gray Otis, founder and owner of the Los Angeles Times, and a number of business colleagues embarked on reshaping southern California by expanding that into a harbor at San Pedro using federal dollars.

This put them at odds with Collis P. Huntington, president of the Southern Pacific Railroad Company and one of California’s “Big Four” robber barons. 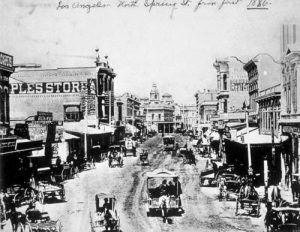 The line reached Los Angeles in 1876, and Huntington directed it to a port at Santa Monica, where the Long Wharf was built. The San Pedro forces eventually prevailed, although it required Banning to turn his railroad over to the Southern Pacific Railroad. Work on the San Pedro breakwater began in 1899 and was finished in 1910. Otis Chandler and his allies secured a change in state law in 1909 that allowed Los Angeles to absorb San Pedro and Wilmington, using a long, narrow corridor of land to connect them with the rest of the city.

Oil was discovered by Edward L. Doheny in 1892, near the present location of Dodger Stadium. Los Angeles became a center of oil production in the early 20th Century, and by 1923 the region was producing one-quarter of the world’s total supply. Today, it is still a significant producer.

In order to sustain future growth needed new sources of water. The only local water in Los Angeles was the intermittent Los Angeles River and groundwater replenished by the area’s minimal rain. Legitimate concerns about water supply were exploited to gain backing for a huge engineering and legal effort to bring more water to the city and allow more development. Two hundred and fifty miles northeast of Los Angeles in Inyo County, near the Nevada line, a long slender desert region known as the Owens Valley had the Owens River, a permanent stream of fresh water fed by the melted snows of the Sierra Nevada that collected in the shallow, saline Owens Lake, where it evaporated. 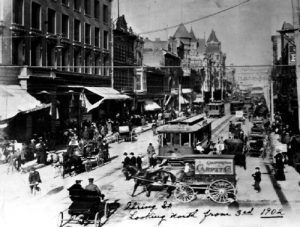 Sometime between 1899 and 1903, Harrison Gray Otis and his son-in-law successor, Harry Chandler, led successful efforts at buying up cheap land on the northern outskirts of Los Angeles in the San Fernando Valley. At the same time, they enlisted the help of William Mulholland, Chief of the Los Angeles Water Department, and J.B. Lippencott, of the United States Reclamation Service. Lippencott performed water surveys in the Owens Valley for the Service while secretly receiving a salary from the City of Los Angeles. He succeeded in persuading Owens Valley farmers and mutual water companies to pool their interests and surrender the water rights to 200,000 acres of land to Fred Eden, Lippencott’s agent and a former mayor of Los Angeles.

Eden then resigned from the Reclamation Service, took a job with the Los Angeles Water Department as an assistant to Mulholland, and turned over the Reclamation Service maps, field surveys, and stream measurements to the city. Those studies served as the basis for designing the longest aqueduct in the world.

By July 1905, Chandler’s L.A. Times began to warn the voters of Los Angeles that the county would soon dry up unless they voted bonds for building the aqueduct. Artificial drought conditions were created when water was run into the sewers to decrease the supply in the reservoirs, and residents were forbidden to water their lawns and gardens. On election day, the people of Los Angeles voted for $22.5 million worth of bonds to build an aqueduct from the Owens River and to defray other expenses of the project. With this money, and with a special Act of Congress allowing cities to own property outside their boundaries, the City acquired the land that Eden had acquired from the Owens Valley farmers and started to build the aqueduct. On the occasion of the opening of the Los Angeles Aqueduct on November 5, 1913, Mullholland’s entire speech was five words: “There it is. Take it.”

The City of Los Angeles mostly remained within its original 28 square-mile land grant until the 1890s. The first large additions to the city were the districts of Highland Park and Garvanza to the north and the South Central area. In 1906 the approval of the Port of Los Angeles and a change in state law allowed the city to annex the Shoestring, a narrow and crooked strip of land leading from Los Angeles south towards the port. The port cities of San Pedro and Wilmington were added in 1909, and the city of Hollywood was added in 1910, bringing the city up to 90 square miles.

The opening of the Los Angeles Aqueduct provided the city with four times as much water as it required, and the offer of water service became a powerful lure for neighboring communities. The City, saddled with a large bond and excess water, locked in customers through annexation by refusing to supply other communities. Otis Chandler, a major investor in San Fernando Valley real estate, used his Los Angeles Times to promote development near the aqueduct’s outlet. By referendum of the residents, 170 square miles of the San Fernando Valley, along with the Palms district, were added to the city in 1915, almost tripling its area, mostly towards the northwest. Over the next couple of decades, dozens of additional annexations were made to the city.

At about the same time, motion picture production companies from New York and New Jersey started moving to sunny California because of the good weather.  Although electric lights existed at that time, none were powerful enough to adequately expose film; the best source of illumination for movie production was natural sunlight. Besides the moderate, dry climate, they were also drawn to the state because of its open spaces and a wide variety of natural scenery.

Another reason was the distance of Southern California from New Jersey, which made it more difficult for Thomas Edison to enforce his motion picture patents. At the time, Edison owned almost all the patents relevant to motion picture production, and, in the East, movie producers acting independently of Edison’s Motion Picture Patents Company were often sued by Edison and his agents. Thus, movie makers working on the West Coast could work independently of Edison’s control. If he sent agents to California, word would usually reach Los Angeles before the agents did, and the movie makers could escape to nearby Mexico. Before long, dozens of film studios were established in the Nevada district.