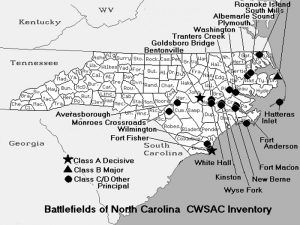 After the Civil War began, North Carolina joined the Confederacy with some reluctance on May 20, 1861. It was the second-to-last state to leave the Union. The reluctance stemmed because its population was divided in their loyalties between the North and the South and remained divided throughout the war. While seven states seceded as a direct result of Abraham Lincoln’s election to the presidency, North Carolina joined Virginia, Tennessee, and Arkansas in initially choosing to remain within the Union. However, after Confederate forces in Charleston, South Carolina fired on the Federal garrison at Fort Sumter in April 1861, North Carolina’s position changed and opted to become one of the eleven states of the Confederacy rather than fight against its neighboring states.

During the war, of the approximately 150,000 white men in North Carolina between the ages of 15 and 49 — almost 125,000 (or more than 80%) served in the Confederate Army at some point. However, some 24,000 of these men deserted their military units. Between 33,000 and 35,000 died in battle, of wounds, or of disease between 1861 and 1865. Meanwhile, at least 10,000 white and an additional 5,000 black North Carolinians joined Union army units and fought against the Confederacy. Thousands more North Carolinians refused to be conscripted into Confederate military service or to support the state’s war effort by paying taxes or contributing material.

Tensions between Unionists and Confederate forces in North Carolina culminated in two mass killings. The first occurred in late January or early February of 1863 in Madison County when members of the 64th North Carolina infantry killed 13 citizens who were suspected of being Unionists and deserters from the Confederate Army. A year later in February 1864, Major General George E. Pickett hanged 22 North Carolinians captured fighting for the Union after they had deserted the Confederacy. 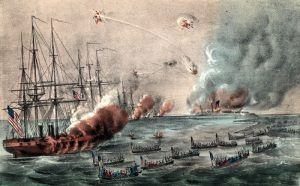 Hatteras Inlet Batteries – August 28-29, 1861 – Also called the Battle of Fort Clark and Battle of Fort Hatteras, this battle took place in Dare County on August 28-29, 1861. On August 26, an amphibious expedition led by Major General Benjamin F. Butler and Flag-Officer Silas Stringham, embarked from Fort Monroe, Virginia to capture Hatteras Inlet, an important haven for blockade-runners. On the 28th, while the navy bombarded Forts Clark and Hatteras, Union troops came ashore and attacked the rear of the Confederate batteries. On August 29, Colonel William F. Martin surrendered the Confederate garrison of 670 men. The Federals lost only one man. Butler returned to Fort Monroe, leaving the captured forts garrisoned. This movement was part of Union efforts to seize coastal enclaves from which to enforce the blockade. The Union victory resulted in three Union casualties and 770 Confederate.

Burnside’s North Carolina Expedition – January-July 1862 – This expedition was a series of engagements fought along the North Carolina Coast between February and June 1862. It was aimed at closing blockade-running ports inside the Outer Banks. The amphibious operation was carried out primarily by New England and North Carolina troops under Brigadier General Ambrose E. Burnside and assisted by the North Atlantic Blockading Squadron under Captain Louis M. Goldsborough. 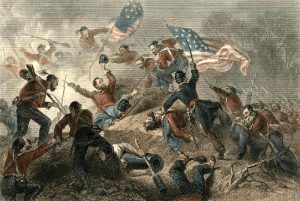 Roanoke Island – February 7-8, 1862  – Also called the Battle of Fort Huger, this battle took place on February 7-8, 1862 in Dare County as part of Burnside’s North Carolina Expedition. On February 7, 1862, Brigadier General Ambrose E. Burnside landed 7,500 men on the southwestern side of Roanoke Island, North Carolina in an amphibious operation launched from Fort Monroe, Virginia. The next morning, supported by gunboats, the Federals assaulted the Confederate forts on the narrow waist of the island, driving back and out-maneuvering Brigadier General Henry Wise’s outnumbered command. After losing less than 100 men, the Confederate commander on the field, Colonel H.M. Shaw, surrendered about 2,500 soldiers and 32 guns. Burnside had secured an important outpost on the Atlantic Coast, tightening the blockade. The Union victory resulted in total estimated casualties of 2,907 including 37 killed, 214 wounded, and 13 missing from the Union, and 23 killed, 58 wounded, and 500 captured from the Confederates.

New Berne – March 14, 1862 – This battle took place in Craven County on March 14, 1862. On March 11, 1862, Brigadier General Ambrose E. Burnside’s command embarked from Roanoke Island to rendezvous with Union gunboats at Hatteras Inlet for an expedition against New Berne. On March 13, the fleet sailed up the Neuse River and disembarked infantry on the river’s south bank to approach the New Berne defenses. The Confederate defense was commanded by Brigadier General Lawrence Branch. On March 14, John G. Foster’s, Jesse Reno’s, and John G. Parke’s brigades attacked along the railroad and after four hours of fighting drove the Confederates out of their fortifications. The Federals captured nine forts and 41 heavy guns and occupied a base which they would hold to the end of the war, in spite of several Confederate attempts to recover the town. The Union victory resulted in total estimated casualties of 1,080. 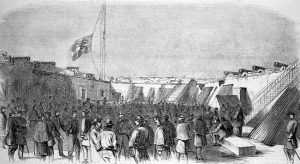 Fort Macon – March 23-April 26, 1862 – This long battle took place in Carteret County, North Carolina between March 23 and April 26, 1862.  In late March 1862, Major General Ambrose E. Burnside’s army advanced on Fort Macon, a third system casemated masonry fort that commanded the channel to Beaufort, 35 miles southeast of New Berne. The Union force invested the fort with siege works and, on April 26, opened an accurate fire on the fort, which soon breached the masonry walls. Within a few hours, the fort’s scarp began to collapse, and the Confederates hoisted a white flag. This action demonstrated the inadequacy of masonry forts against large-bore, rifled artillery. The Union victory resulted in Union casualties of 10 and Confederate – 480.

South Mills – April 19, 1862  – Also called the Battle of Camden, this battle was also part of Burnside’s North Carolina Expedition and took place in Camden County on April 19, 1862. After learning that the Confederates were building ironclads at Norfolk, Major General Ambrose E. Burnside planned an expedition to destroy the Dismal Swamp Canal locks to prevent the transfer of the ships to Albemarle Sound. He entrusted the operation to Brigadier General Jesse Lee Reno’s command, which embarked on transports from Roanoke Island on April 18. By midnight, the convoy reached Elizabeth City and began disembarking troops. On the morning of April 19, Reno marched north on the road to South Mills. At the crossroads a few miles below South Mills, elements of Confederate Colonel Ambrose Wright’s command delayed the Federals until dark. Reno then abandoned the expedition and withdrew during the night to the transports at Elizabeth City. The transports carried Reno’s troops to New Berne where they arrived on April 22. The inconclusive battle resulted in total estimated casualties of 150.

Tranter’s Creek – June 5, 1862 – This battle took place in Pitt County on June 5, 1862, when Colonel Robert Potter, garrison commander at Washington, North Carolina, ordered a reconnaissance in the direction of Pactolus. The 24th Massachusetts under Lieutenant Colonel F.A. Osborne advanced to the bridge over Tranter’s Creek, where it encountered the 44th North Carolina, under Confederate Colonel George Singletary. Unable to force a crossing, Osborne brought his artillery to bear on the mill buildings in which the Confederates were barricaded. Colonel Singletary was killed in the bombardment, and his troops retreated. The Federals did not pursue and returned to their fortifications at Washington. The Union victory resulted in total estimated casualties of 40.