St. Augustine, Florida’s Historic Gem – Our video looking at the history and some of the sites from our 2017 visit to America’s Oldest City. 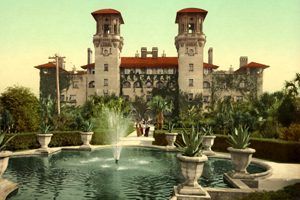 The Alcazar Hotel is now the Lightner Museum in St. Augustine, Florida

Located in Northeast Florida, St. Augustine is the oldest continuously occupied European-established settlement and port in the continental United States. The area was first explored by Spanish Puerto Rico Governor, Juan Ponce de Leon on April 3, 1513, when he landed, remained for five days, and claimed the region for the Spanish Crown.

However, it would be more than 50 years before any settlement would be established. Though other attempts at European colonization were made in Florida by the Spanish and the French, all failed until Spanish Captain Pedro Menendez de Aviles arrived on September 8, 1565. Sailing through the St. Augustine Inlet into Matanzas Bay he, along with 1,500 soldiers and colonists disembarked near the Timucuan Indian town of Seloy. He also brought the first slaves in what would become the United States. Taking possession of the territory along the river, he founded a settlement, naming it St. Augustine because he first sighted Florida on August 28, St. Augustine’s Day, a Catholic holiday.

Menendez’s goal was to dig a quick fortification to protect his people and supplies as they were unloaded from the ships, and then to take a more proper survey of the area to determine the best location for the fort.

In the meantime, Frenchman, Jean Ribault had also sailed to America to re-supply the French post of Fort Caroline, in today’s South Carolina. Learning of Menendez’s arrival in Florida, he and his men sailed on September 10th to attack and wipe out the Spanish at St. Augustine, but a hurricane carried his ships far to the south, wrecking them on the Florida coast between present-day Daytona Beach and Cape Canaveral.

At the same time, Menendez led a force to attack Fort Caroline. Since most of the soldiers were absent, Menendez was easily able to capture the French settlement, killing most of the men in the battle. Some of the inhabitants, including Rene de Laudonniére, who had founded Fort Caroline, and the artist Jacques LeMoyne, were able to escape to ships and return to France. Menendez spared the women and children and sent them by ship to Havana.

However, Menendez then learned from Timucuan Indians that a group of white men were on the beach a few miles south of St. Augustine. He marched with 70 soldiers to where an inlet had blocked 127 of the shipwrecked Frenchmen trying to get back to Fort Caroline. With a captured Frenchman as a translator, Menendez described how Fort Caroline had been captured and urged the French to surrender. Despite rumors to the contrary, he made no promises to spare them. Having lost most of their food and weapons in the shipwreck, the French surrendered. However, when Menendez then demanded that they give up their Protestant faith and accept Catholicism, they refused. In the end,111 Frenchmen were killed. Only 16 were spared – a few who professed to be Catholic, some impressed Breton sailors, and four artisans needed at St. Augustine.

Two weeks later, the sequence of events was repeated. More French survivors appeared at the inlet, including Jean Ribault. On October 12th, Ribault and his men surrendered and met their fate, again refusing to give up their faith. This time 134 were killed. From that time, the inlet was called Matanzas — meaning “slaughters” in Spanish.

St. Augustine became the capital of Florida and the Spanish military headquarters of North America. Its governors manned forts and policed the coast from Virginia to Florida for the next four decades, repulsing efforts of other nations to establish colonies in the territory. One of the most formidable attacks on St. Augustine was made in 1586 by British Admiral Sir Francis Drake, who sacked and burned the town. The Spanish colonists fled to forest refuges during the raid, but, later returned and rebuilt their homes. 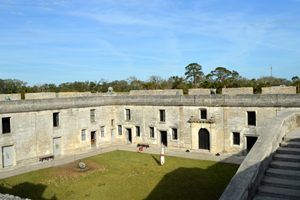 St. Augustine was safer after it became the headquarters of missionary activities among the southeastern Indians, and through its 40 or more mission towns, controlled the natives and defended the frontier against the French and English. However, it was still an attractive target for aggressors. In 1668, English privateer Robert Searle attacked and plundered St. Augustine. In the aftermath of his raid and the founding of Charleston, South Carolina by the English, the Spaniards, began construction of a stone fort called Castillo De San Marcos in 1672. The walls were made of coquina, a kind of stone that had been found near the coast of Anastasia Island. This limestone formed over thousands of years from the shells of the tiny coquina clam cemented together through time and nature into a solid, but soft, stone that hardened over time. Slowly the walls rose and in August 1695, the Castillo De San Marcos, including curtain walls, bastions, living quarters, a moat, ravelin, and seawall were completed. Though St. Augustine was now very well protected, it wouldn’t stop the attacks. From South Carolina in 1702, and again, in 1728, the English descended to burn, plunder, and seize thousands of Indians for slaves. Although Castillo De San Marcos withstood artillery attacks, the hospitals, monasteries, and the valuable Franciscan library were destroyed. 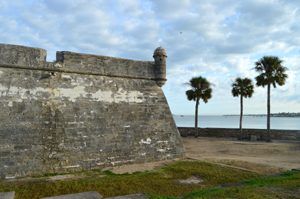 In 1738, the Spanish Governor Manual de Montiano at St. Augustine granted freedom to runaway British slaves and encouraged slaves to escape for sanctuary in Florida. If the fugitives converted to Catholicism and swore allegiance to the king of Spain, they were given freedom, arms, and supplies. As more and more slaves took advantage of the offer, the first legally recognized free community of ex-slaves was established. Known as Gracia Real de Santa Teresa de Mose, or Fort Mose, it was located north of St. Augustine to serve as another defense for the city.

James Oglethorpe, British founder and governor of Georgia, launched a series of attacks on St. Augustine, the most formidable in 1740, and although he failed to capture the fort, he took all the outlying defenses, including Fort Mose. His victory on St. Simon’s Island in 1742 ended the power of Spanish St. Augustine. Twenty years later, when the British took over Florida, they found a town of empty houses, as most of its residents had fled to Cuba.

Under British rule (1763-1783), St. Augustine enjoyed prosperity. The Indians were no longer a menace, great plantations were established in the area, many slave-owning English men found residence in the city, where anti-rebel sentiment was intense. John Hancock and Samuel Adams were burned in effigy in the public square, and later, prominent dissenters, including Heyward, Rutledge, and Middleton — all signers of the Declaration of Independence were imprisoned at Castillo De San Marcos. 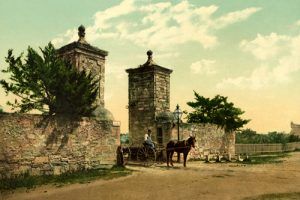 The city became an important depot for British operations against the Southern Colonies, and gunboats patrolling the coast and the St. Johns River brought in numerous American prizes. A land attack against Savannah, Georgia was launched from St. Augustine in 1777, and a naval venture in 1783 resulted in the capture of the Bahamas for England. A Tory paper, the East Florida Gazette, established here in 1783, ceased publication the year the American Revolution ended. When St. Augustine received word that Spain was again to control Florida, the British quickly evacuated. Abandoned houses gradually filled with Americans taking up Spanish land grants. A few years later, American residents urged the annexation of Florida by the United States, and in 1812, a number of them joined a similar group from Fernandina for a time to support a Republic of Florida. Another Spanish evacuation took place in 1821 when Spain sold Florida Territory to the United States (the result of the Florida Purchase Treaty of 1819). After the new American Government became operative, the second session of the legislature was held in St. Augustine, but, later, in 1824 Tallahassee was chosen as the Territorial capital.