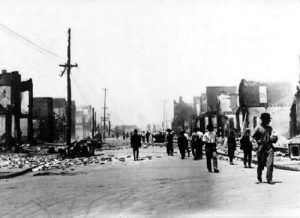 The aftermath of the Tulsa Race Riot, 1921

On June 1, 1921, one of the worst race riots in history occurred in Tulsa, Oklahoma. “Black Wallstreet,” the name fittingly given to one of the most affluent black communities in America, was bombed from the air and burned to the ground by mobs of envious whites. In a period spanning fewer than 12 hours, the thriving black business district in north Tulsa lay smoldering, 3,000 black Americans were dead, and over 600 successful businesses were lost.

Behind the destruction was the Ku Klux Klan, working in consort with ranking city officials and many other sympathizers. It cost the black community everything, and not a single dime of restitution nor insurance claims were ever awarded the victims. Many of the dead were buried in mass graves around the city; some were thrown into the river, and others were thrown into a coal mine.

In 1922, another anti-lynching bill was drafted which passed in the House of Representatives but was defeated in the Senate and again, the tragedies continued to occur. In the 1930’s, the depression fueled the hunt for racial as well as political scapegoats.

Souvenir photos and postcards of lynching become a lost genre of American photography when the Postmaster General finally banned such postcards from going through the mail in the mid-1920s. Small town photographers, who had made large profits from the thousands of penny postcards, were disappointed to lose a large part of their business. Though lynching photography continued, they at least stopped going through the mail.

In 1925, Price, Utah saw the last lynching of a black man in the American West. Robert Marshall, an itinerant miner was hanged after two white boys said they had seen him near the scene where a white man was murdered. A thousand people watched the hanging but not one person would testify before a grand jury as to who carried out the lynching.

The drama of these horrible spectacles seemed to increase over time with the lynch leader often dressed in a garish costume and bandying about numerous objects, such as lynch ropes, the American flag, guns, and gasoline, in or to create an atmosphere of even higher excitement. Further, the sadistic nature of the crowds also increased. Such was the case when James Irwin was lynched on January 31, 1930. Accused of the murder of a white girl in Ocilla, Georgia, Irwin was taken by a rampaging mob and as people cheered and children played during the festivities, his fingers and toes were cut off, his teeth pulled out by pliers and then he was castrated. He was then burned alive in front of hundreds of onlookers. Afterward, onlookers fired rifles and handguns hundreds of time into the corpse and pieces of the body were taken as souvenirs of the event. No one was ever punished for this barbaric killing.

On the night of August 7, 1930, three young African Americans — Thomas Shipp, age nineteen; Abram Smith, age eighteen; and sixteen-year-old James Cameron, faced the hideous wrath of a lynch mob in the Ku Klux Klan-dominated town of Marion, Indiana. Only Cameron survived. The black youths had been involved in the robbery-inspired murder of Claude Deeter, 23, a white factory worker from nearby Fairmount, Indiana, and were accused of sexually assaulting Deeter’s white girlfriend, nineteen-year-old Marion resident Mary Ball. While the latter charge was never proven, such charges, however groundless, were easily assumed by racist whites and frequently served to incite lynch mobs to commit even greater atrocities.

Both Shipp and Smith were snatched from a jail cell only a block and a half from the giant oak tree where their bodies were soon to hang lifeless, beaten and hanged to death by the furious mob. Cameron was badly beaten and nearly suffered an identical demise, but was saved at the last moment by the intervention of a “voice” from the crowd. “That boy didn’t have anything to do with any killing or raping!” shouted the voice. Cameron’s mysterious benefactor was never identified. Later James Cameron would go on to write a book entitled, A Time of Terror, from which the following account was taken.

“Thousands of Indianans carrying picks, bats, ax handles, crowbars, torches, and firearms attacked the Grant County Courthouse, determined to “get those goddamn N***ers.” A barrage of rocks shattered the jailhouse windows, sending dozens of frantic inmates in search of cover. A sixteen-year-old boy, James Cameron, one of the three intended victims, paralyzed by fear and incomprehension, recognized familiar faces in the crowd — schoolmates, and customers whose lawns he had mowed and whose shoes he had polished — as they tried to break down the jailhouse door with sledgehammers. Many police officers milled outside with the crowd, joking. Inside, fifty guards with guns waited downstairs.

The door was ripped from the wall, and a mob of fifty men beat Thomas Shipp senseless and dragged him into the street. The waiting crowd ‘came to life.’ It seemed to Cameron that ‘all of those ten to fifteen thousand people were trying to hit him all at once.’ The dead Shipp was dragged with a rope up to the window bars of the second victim, Abram Smith. For twenty minutes, citizens pushed and shoved for a closer look at the ‘dead n***er.’ By the time Abe Smith was hauled out he was equally mutilated. ‘Those who were not close enough to hit him threw rocks and bricks. Somebody rammed a crowbar through his chest several times in great satisfaction.’ Smith was dead by the time the mob dragged him ‘like a horse‘ to the courthouse square and hung him from a tree. The lynchers posed for photos under the limb that held the bodies of the two dead men.

Then the mob headed back for James Cameron and ‘mauled him all the way to the courthouse square,’ shoving and kicking him to the tree, where the lynchers put a hanging rope around his neck. Cameron credited an unidentified woman’s voice with silencing the mob and opening a path for his retreat to the county jail and, ultimately, for saving his life. Mr. Cameron has committed his life to retelling the horrors of his experience and ‘the Black Holocaust‘ in his capacity as director and founder of the museum with the same name in Milwaukee, Wisconsin. Under magnification, one can see the girls in this photo clutching ragged swatches of dark cloth.

“After souvenir hunters divvied up the bloodied pants of Abram Smith, his naked lower body was clothed in a Klansman’s robe — not unlike the loincloth in traditional depictions of Christ on the cross. Lawrence Beitler, a studio photographer, took this photo. For ten days and nights, he printed thousands of copies, which sold for fifty cents apiece.”

In its sporadic occurrences over the next decades, lynching continued to be a vehicle of terror and as a last resort in opposition to the drive for political and civil rights through the 1950s, 1960s, and beyond.

The NAACP hoped that the election of Franklin D. Roosevelt in 1932 would finally bring an end to lynching A new bill was drafted in 1935 that would punish sheriffs who failed to protect their prisoners from lynch mobs. However, Roosevelt would not speak out in favor of the bill, arguing that white voters in the south would never forgive him and he would lose the next election.

When the corpse of Brooke Hart, a San Jose youth, was discovered in San Francisco Bay on November 26, 1933, a mob materialized to punish the alleged kidnappers and murderers, Thomas H. Thurmond and John “Jack” Holmes. The lynchers rammed open the jail door, assaulted the guards, and dragged Holmes and Thurmond to St. James Park, beating them into near unconsciousness. Holmes’s clothes were sheared from his body, and Thurmond’s pants were drawn down to his ankles. A gathering of some six thousand spectators witnessed the hanging.

Governor James Rolph’s doublespeak was typical of many lynching-era politicians: “While the law should have been permitted to take its course, the people by their action have given notice to the entire world that in California kidnapping will not be tolerated.”

Southern trees bear a strange fruit,
Blood on the leaves and blood at the root,
Black body swinging in the Southern breeze,
Strange fruit hanging from the poplar trees.

Pastoral scene of the gallant South,
The bulging eyes and the twisted mouth,
Scent of magnolias sweet and fresh,
And the sudden smell of burning flesh.

Here is a fruit for the crows to pluck,
For the rain to gather, for the wind to suck,
For the sun to rot, for a tree to drop,
Here is a strange and bitter crop.

1 thought on “Lynchings & Hangings of America”